The BuzzBuilding - Belatchew Arkitekter's proposal on how to make cities self-sufficient in protein through urban insect farming - is currently on display at the Roca London Gallery as part of the exhibition 'London 2026: recipes for building a food capital', a showcase of creative visions, architectural schemes and live projects from around the world that explore the sustainable integration of food into the urban mix. 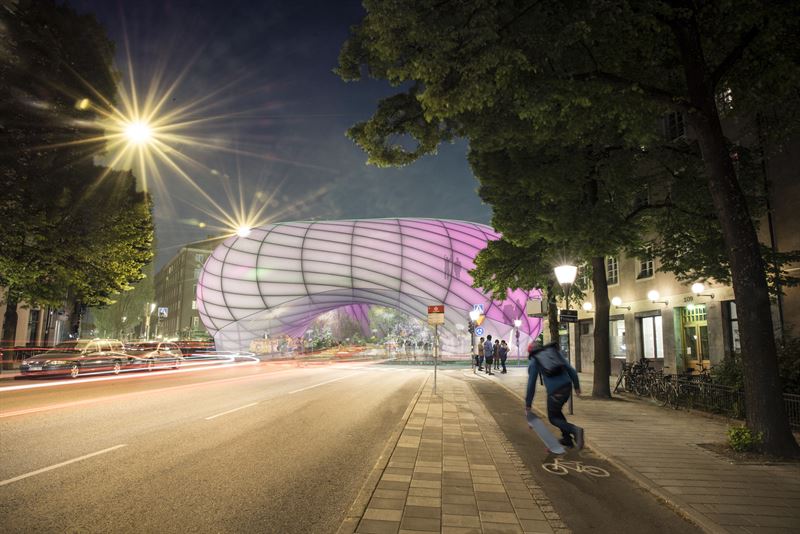 Roca’s spring exhibition is set in London in 2026, when the capital’s population will have passed the 10 million mark.  The show imagines how ‘agritecture’ – buildings that can grow food - will have impacted our cityscape, with food being produced at a variety of scales.

“We are overwhelmed with the interest the world has shown our BuzzBuilding, and it is gratifying that we now have the opportunity to show how the BuzzBuilding can resolve London’s need of protein at the Roca London Gallery,” says Rahel Belatchew, Principal Architect, CEO and founder of Belatchew Arkitekter.

“We also look forward to discuss our proposal for how to make cities self-sufficient in protein within the framework of ‘agritecture’ – buildings growing food – together with a distinguished panel including Carolyn Steel, whose book ‘Hungry City’ points out the close connection between the city and the food needed for its citizens,” Rahel Belatchew concludes.

The exhibition is curated by Department 22 and takes place at the Roca London Gallery, designed by Zaha Hadid. An opening event on Wednesday 13 February 2019 will include a panel discussion with Carolyn Steel, Architect/writer; May Rosenthal Sloan, Co-curator of 'Food: Bigger than the Plate'; Nick Jeffries, Engineer, Ellen MacArthur Foundation, Clare Brass, Founder, Department 22 besides Rahel Belatchew, Belatchew Arkitekter. More about the exhibition can be found at http://www.rocalondongallery.com/en/activities/detail/206

About the BuzzBuilding and Urban Insect Farming

In the year 2050 it is estimated that the Earth will be populated by 9 billion people and a question that arises is how a sustainable food-production that produces enough for everyone, without posing additional stress on the environment, can be designed. A solution is to find an alternative to meat production, and one such protein source is insects. There are approximately 1900 edible species of insects, and 2 billion of the world’s population already eat insects today. Protein production from insects is much more efficient than meat production, for example, 10 kg fodder is needed to produce 1 kg of beef, but the same amount of fodder can produce 9 kg of insects.

To illustrate what an urban insect production might look like, Belatchew Labs has developed the insect farm BuzzBuilding for the cultivation of crickets. The BuzzBuilding is a building that integrates the whole insect production flow, from the egg to the ready-to-eat insect. Additionally, the BuzzBuilding is a safe haven for endangered wild bees, which, apart from ensuring endangered species of bees’ continued existence, also turns the city into a blooming and fertile city.

High res images and an infographic of the BuzzBuilding can be found at http://belatchew.com/downloads/buzzbuilding.zip

Belatchew Arkitekter is a Stockholm based architectural firm working within a wide range of projects, from urban planning and housing to offices and public buildings. The work of the office is idea driven with an aim to find unexpected solutions that enhance the potential of a site and add value to real estate. Belatchew Arkitekter follows the global development on sustainability and consider it our mission to integrate sustainable solutions in all our projects.