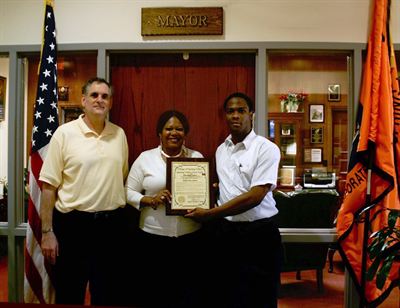 An amazing young man, whose life was saved by a Scientology Volunteer Minister after the Haiti earthquake, is determined to make a difference for his country.

Spring Valley, New York, Mayor Noramie Jasmin has designated July 12, 2011, as Ralph Mary Gedeon Day in recognition of the courage and resolve of a young survivor of the January 2010 Haiti earthquake.

Gedeon, 23, has set his sights on a career as a civil engineer, to help rebuild the infrastructure of the Port-au-Prince region and implement standards that will prevent future natural catastrophes from decimating his country.

Gedeon was buried alive by the Haiti earthquake when his engineering school collapsed on top of him. By the time his father found and dug him out of the rubble, a day and a half had gone by, along with any chance that Gedeon could keep the leg that was crushed by tons of concrete and cinder block.

Despite his miraculous rescue, Gedeon was dying because he was refusing the amputation that might save his life but would leave him a burden to his family. Had he not relented, he would not be alive today.

Gedeon was presented a plaque by Mayor Jasmin at a ceremony in her office. Accompanying him was Rockland County LPN, EMT and Scientology Volunteer Minister Ayal Lindeman. It was Lindeman, volunteering at Port-au-Prince General Hospital as part of the Scientology Haiti Disaster Response, who convinced Gedeon to undergo the amputation on the promise that the young man would be able to live a self-sufficient and valuable life.

Gedeon walked to his ceremony today “on his own two legs”—one of which is made of steel.

Mayor Jasmin, the first Haitian-American female mayor in the United States, is not the only official impressed by Gedeon’s story. U.S. Senator Kirsten Gillibrand, U.S. Congressman Eliot Engel of the Bronx and Ellen Jaffee, who represents Rockland County in the New York Assembly, have all gone out of their way to arrange “humanitarian parole”—the opportunity, extended under rare circumstances for victims of natural disasters and other emergencies, to come to America for life-saving medical care.

Scheduled to finish prerequisite courses at Rockland Community College in Fall 2010, Gedeon will be attending University of Central Florida next year to complete his engineering degree, made possible by a scholarship from ISTAT (International Society of Transport Aircraft Trading) that provided the hospital flight that brought Gedeon to the United States in February 2011. The University is crediting training he completed at the Port-au-Prince engineering school that could have been his grave.

“I want to complete my schooling and return to Haiti to make a positive difference for my people, my country and who knows, maybe even the world.” says Gedeon. 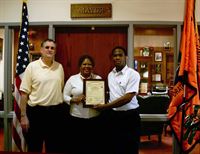