A £1.1Bn Bra IP Auction to Donate Precision Engineered 2050 Bra of the Future to British Museum

A US start-up which made waves in 2013 with the creation of a high-tech bra, which took a precision engineering approach and floating lift technology to comfortably support D+ cup sizes, will auction off its IP portfolio and its scientific secrets in a £1.1billion sale later this summer. For one British museum, the sale means the donation of a unique item – the one-of-a-kind 2050 model of Kewi’s scientific response to back pain and discomfort caused by large breasts.

The futuristic 2050 Kewi Bra is the only prototype in existence in the world and at least 34 years away from being commercially available. It is to be held in a museum in the U.K. as an artistic piece, commemorating a century since the first bra patent was recorded by Mary Phelps Jacob in 1914.  The museum to receive the piece is yet to be selected.

At the reserve price of $1.6Bn, the Kewi Bra, viewable at www.KewiBra.com, is nothing short of a site worth seeing. Having realised his vision, Muyiwa Olumide, inventor and founder of Kewi LLC, has joined forces with a team of top experts to develop a business proposal through the Folio Group. It outlines a twenty year, multi-million dollar commercialization strategy showing how the Kewi Bra invention can be monetized though a path being praised as the “Uber of intimate apparel.” Details of the plan can be seen at Folio Group’s website:  www.FolioDesignGroup.com

Olumide is a young Nigerian-American on a mission. Muyiwa’s mother, a doctor and fashion designer, passed of pancreatic cancer when he was seven years old. He has pledged a portion of proceeds from the IP auction to go towards cancer research and help those in need of care.

Muyiwa Olumide, creator of Kewi and a Surrealist Artist says, “Have we really reached a time when a high-tech bra can be valued at £1.1Bn before hitting the market? The question still lingers, but in reality the public may not get to try on the complete version being auctioned until at least 2050. The strategy I have developed with Folio suggests starting with multiple less complex versions of the design and releasing versions with new features annually. Could this be the Apple of intimates? It is too early to say for sure, however the strategy is undoubtedly bold.”

Find out more at www.KewiBra.com 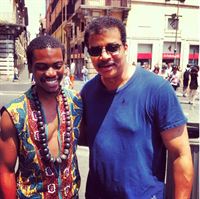