Ever-Present Leather Sofas Through The Decades 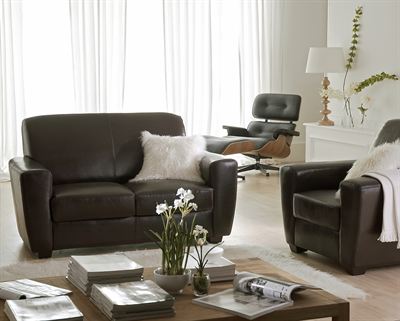 For the past eighty years, the real leather sofa has been ubiquitous in living rooms and communal areas across the globe. Their enduring popularity has seen them see off trends in velvet, fabric and suede in order to remain the most popular type of sofa on the market, with many relying on them time and time again to provide comfort and style for their home. This chronological timeline from the 1930s to the turn of the century examines exactly how the real leather sofa has beaten off all other trends to emerge victorious as the consistently best-loved and most fashionable type of seating arrangement of all time.

The flea markets of Paris were the birthplace of some of the most stunning genuine leather sofas, the designs of which are still replicated for use in living areas in the modern day. The vintage style, with hardwood sideboards, antique art and these chic leather sofas defined the 1930s era, with passing trends including fringing and beading on accessories such as lamps and cushions. Art Deco was the defining style of the 1930s, with Modernism coming into play with its sleek lines and pale colours. All styles could be adapted to fit a leather sofa in some way or another; the most popular types in this era were softly curved three-piece suites which complemented each other and matched the rest of the room.

The 1940s was filled with revolutionary historical events which dictated the changing style in the home. For the first half of this decade, resources and money were scarce, with most funds devoted to the war effort, and so living rooms were sparsely furnished without clutter, with geometric designs and shapes used to create a busy effect that seemed to fill the room. Post-war, patriotism was a large theme, with red, white and blue popular colours for furnishings. Soft pastel shades were also prevalent as they created a sense of calm after the intense storm of World War II. Through all these styles, the trusty leather sofa remained, providing a staple piece around which to base an entire room’s furnishings.

Often hailed as ‘the age of the consumer’, the 1950s saw huge changes in the home; a sort of ‘out with the old, in with the new’ phase where experimental trends emerged. An edgy, more forward-thinking type of interior design came to the fore with Modernism, which had started out in the 1930s and seen a stutter as the 1940s brought wartime disturbance. Modernism was minimal, and made use of open-plan kitchen and lounges, new materials such as PVC and fibreglass, and the invention of such innovations as the sofa bed and the hoover. As seen in the traditional diners of America and in the newly-populated office blocks which were beginning to emerge, leather was still the primary choice of seating arrangement, and was loved and appreciated for its durability, style and the ease of cleaning.

The ‘Mad Men’ era saw two clashing styles come to prominence; the slick, corporate theme that came with executive offices, complete with rich dark woods and lustrous black leather, and the psychedelic curves of the ‘hippy’ movement, which favoured loud, clashing colours and as bright an interior as possible. The office-style interiors drew on the most exclusive and elite furniture pieces from the past, while designers feverishly designed curved furniture items for those who favoured a more contemporary 60s approach. In the high-end offices of the world, leather was still pervasive and universal; it signified power and status, whilst offering its users support and comfort. Meanwhile, the popular Chesterfield leather sofa was prevalent in homes, draped in multi-coloured throws whilst teens wearing tinted glasses and tie-dye clothing slumped across them listening to the new strains of The Beatles.

Just over forty years ago, the big trends in interior design were all about odd, clashing prints. The 1970s might stick in many memories as the decade that style forgot, with many not wishing to ever replicate the designs which became popular in this era, but at the time, these trends were cutting edge. Brown leather sofas with mustard throws and garish floral wallpaper, combined with an equally loud carpet and a clashing lime green rug; this is a prime example of the bad taste in this era, which is fondly looked upon but not usually replicated.

The era of big shoulders and even bigger hair; the 80s saw a resurgence in the geometric shapes and designs of the 1930s and 40s. Now the emphasis was less on colour and more on texture and light; reflective surfaces were huge, with mirrored coffee tables and floor-to-ceiling mirrors becoming popular additions within homes. The rich opulence of TV shows like Dallas saw many people attempting to transform their homes into the all-American paradise they witnessed on television, using huge chandeliers and rich leather sofas in order to incorporate that element of upper-class elegance into their living space.

The 1990s was as a decade of no distinct style; it drew on the best part of other trends from across the years and was an experimental decade for interiors. The role of ‘interior designer’ became a true profession as people searched for a way in which to truly define themselves through their home. Everything from minimalism to Art Deco, with plenty of antiques and a hint at the arts-and-crafts movement was covered in the 1990s, and the huge family genuine leather sofa was present throughout them all.

To take advantage of free delivery until the end of September, browse other designs and buy online, visit http://www.leathersofasonline.co.uk 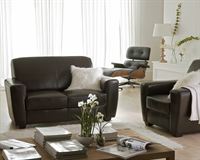