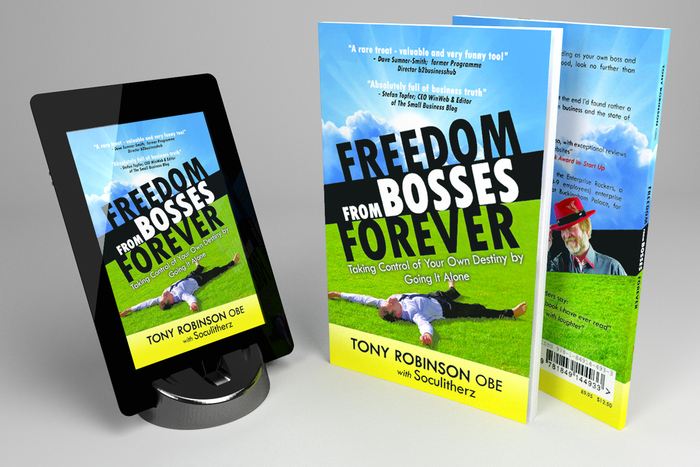 While editing his five-star reviewed book for audio publication, Mr Robinson discovered that progress in the small business community seems to have faltered since its publication in 2009. Though the book was initially described as ‘absolutely full of business truth’ and ‘very funny’, Mr Robinson was sobered by the discovery that 6m small and micro-business owners in the UK are finding it harder than ever.

A 20% average earnings reduction for the self-employed, a culture of late payments for small business owners and ever-increasing  costs of red tape are putting the strain on business owners, according to Robinson. With the next global #MicroBizMattersDay hovering on the horizon, he hopes to shine a light on how the environment for success of micro-business owners  can be improved  through this informal, self-help international movement.

Mr Robinson says, “All the new jobs and much of the growth in this economy are due to new micro-businesses – they really are the UK’s business lifeblood.  It’s now cheaper and easier to start up a new business than it’s ever been before – but business owners suddenly realise they’re up against it, with constantly changing taxation policies, steep energy and transport costs, the price of indemnity insurance, the mis-selling of financial products and more.”

He adds, “As I came to edit my book, ‘Freedom from Bosses Forever’ for its audiobook re-release, it struck me how little has changed since 2009. The self-employed and small business owners of the UK may be happy, but they’re now part of the low-pay economy. This realization has re-energised me, and given me much more determination to make indie business ownership better for all. We want to get 10m business owners involved globally with the next and third, annual #MicroBizMattersDay, helping and collaborating with each other to make small business ownership the attractive and prosperous option that it used to be. We don’t want any free lunches but we do need to level the playing field – to use two clichés in one sentence.”

Mr Robinson is the co-founder of Enterprise Rockers, a non-political, no-lobbying movement, which leverages the #PowerofPlenty to help micro-enterprises. Mr Robinson also founded #MicroBizMattersDay with Tina Boden, and has written extensively on small business ownership. The audiobook of whip-smart satire with business tips ‘Freedom from Bosses Forever’ was released on 30 May 2016 and is available  from  Audible.co.uk, Amazon and iTunes. To celebrate the launch the kindle book version is available free today – 22ndJune.