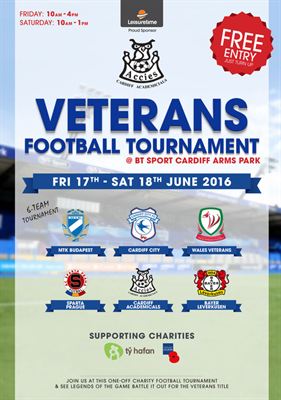 Leisuretime, one of the UK’s premium providers of European coach trips, is pleased to announce they are an official travel partner of the Cardiff Academicals Tournament, and will transport all the teams – including Sparta Prague – to their matches.

Taking place on Friday and Saturday 17thand 18thJune at the BT Sport Cardiff Arms Park, the tournament will see six teams battle it out over the two days in order to be crowned champions. Set to attract a whole host of spectators, the Tournament will kick off a spectacular summer and bring a buzzing atmosphere to south Wales.

George Johnson, Director, said, “We are extremely excited to be travel partners of the Cardiff Academicals Tournament. Giving the Euro 2016 matches a run for their money, the Tournament will pit six teams made up of fantastic players against one another. Set to provide incredible entertainment, both loyal football supporters and sports fanatics alike will really get involved in the spirit of the Tournament. Coupled with the fact that it will help to raise lots of money for some worthy charities, we’re really looking forward to the day.”

Despite many footballers hanging up their boots in their mid-thirties, the Cardiff Academicals are made up of a team of ex-professionals and players who, instead of retiring, continue to play for the love of the sport. The tournament is made up of six teams, Bayer Leverkusen,MTK Budapest, Sparta Prague, local team Cardiff City, Wales Veterans and of course the Cardiff Academicals, and will kick off at 10:00 on each day. The Academicals’ first test will be local rivals, Cardiff City in their Group A opening match on Friday afternoon.

Leisuretime have contributed £2,000 to aid in the organisation of the tournament, with all profits going to Leisuretime’s Nominated Charity of Choice, local children’s hospice, Ty-Hafan, as well as the Royal British Legion.

To find out more about Leisuretime and the fantastic destinations they run holidays to, visit the website: www.leisuretime.co.uk.

Keep up to date on social media:

Established 20 years ago, Leisuretime provide fantastic value getaways. With no currency surcharges, a selection of inclusive holidays that include lunches, drinks and more, many breaks that have low – or no – single room supplements, and financial protection as standard, Leisuretime work hard to provide the best possible service to their customers.