Love Our Hampers? You’ll Love Our History Of Scottish Cheese 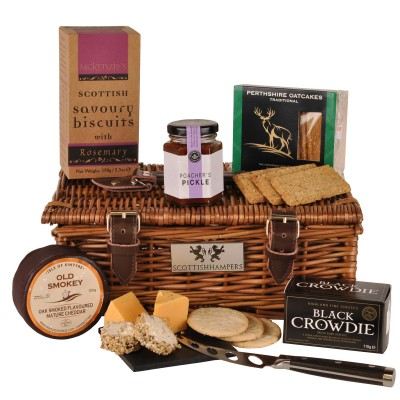 Scotland has a rich and varied history and is renowned for being the home to some of the most mouth-watering produce available to buy. Often given as gifts, in luxury hampers and food parcels, delicacies such as haggis, deep-fried Mars bars, shortbread and Dundee cake have become synonymous with the country, and are the first thing many think of when asked to name an example of Scottish cuisine. But Scotland’s rich history as a celebrated cheese-making country is often overlooked.

Scotland was actually one of the first countries to practice the old art of cheese-making. The invention of the iron plough, threshing machines and tile drainage underground completely changed the farming landscape in the 1700s, introducing crop rotation and cattle breeding to many farms across the whole country, including dairy farms. It was the dairy farms of North Ayrshire which kicked off cheese-making more seriously in the first half of the 18thcentury, but farmers still had trouble transporting and selling their wares. Little was known at this time about how to use the bacteria cultures effectively. It was Louis Pasteur’s breakthroughs and eventual invention regarding pure cultures of pasteurisation which helped to remedy this. Scotland was first recorded as using pure cultures to create cheese in 1895, and from this time until 1910, there was increasing interest in this practice across the country. Although cheese has been recorded as being produced as far back as 6000BC, with evidence in 2000BC of cheese-making in Egyptian tomb murals, this was the first time that large quantities could be created, stored and transported using new advancements in technology. For the first time, cheese became more of a commodity, and was more readily available without compromising its status as a luxury food item.

Scotland’s climate and geographical location lends itself perfectly to cheese-making. A relatively short ‘making season’ during the summer means that many of the more traditional cheese can be matured throughout the colder winter months. This results in the majority of Scotland’s most traditional cheese being predominantly hard cheeses, as they require a much longer period of storage than softer cheeses. Scottish Cheddar accounts for around three quarters of the entire cheese output, with the main production sites located at Stranraer, Locherbie, Bute, Mull and Orkney.

One of the most popular examples of Scottish Cheddar is the Mull of Kintyre Cheese Truckle, which is matured for a minimum of nine months at the Campbeltown creamery and has a distinctly nutty aroma to go with its smooth and buttery taste. Often found in luxury food hampers and bought as a treat for special occasions, the taste is slightly more complex than cheddars from other parts of the UK, and the moist texture and flavour lingers delightfully.

The fact that they mature through the winter makes many of Scotland’s cheese perfectly for Christmas food hampers or cheeseboards. One of the softer cheddars is the Ayrshire Dunlop cheese, which is made at the Ayrshire dairy, and is often referred to as ‘sweet-milk cheese’ because of its mild flavour. Popularly enjoyed with a dram of whisky in many parts of Scotland, Ayrshire Dunlop makes a great addition to a build-your-own hamper or a standalone gift for Christmas or New Year.

To browse the entire sale collection and order online visit http://www.scottishhampers.co.uk/ or call 0845 834 0086.

About Scottish Hampers: Scottish Hampers take a modern approach to gift hampers, sourcing the best quality food and drink from every corner of Scotland. The hampers cater to all tastes and budgets with a choice of contemporary and traditional products. Scottish Hampers evolved from  a Scottish food business established in 1982, building an excellent reputation for quality and service. It is committed to finding the best products from coast to coast, tasting and discovering big name brands and artisan producers. 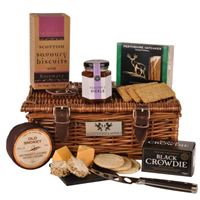