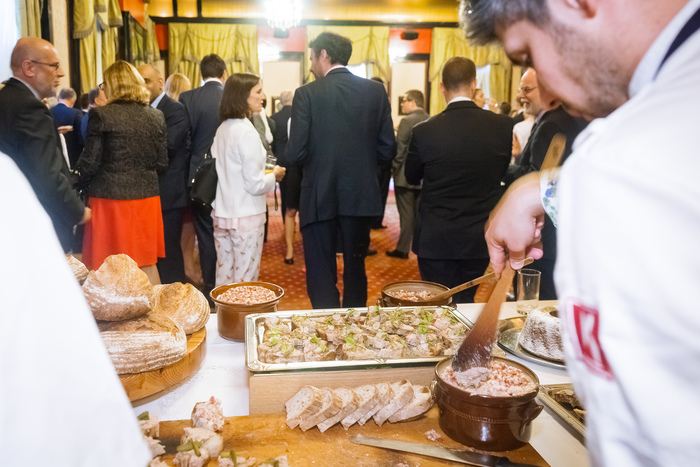 TV chef and ambassador for Polish cuisine in Great Britain, Damian Wawrzyniak will bring his Polish Feast – as served up in Jamie Oliver’s FIFTEEN – to Birmingham next month. The chef, who is making waves with his unique culinary style and passion for Polish food, will kick off his nationwide culinary journey at Centrala, a multifunctional space in the centre of the city with art gallery, temporary exhibitions and café.

It will be the first in a series of seven dates across the UK which will bring family style dishes and delicious Polish treats to diners across the country.

Brimming with flavour and fusing old traditions with modern tastes, the Polish Feast will sweep from north to south, east to west after its Birmingham debut, with Chef Wawrzyniak and a bounty of dishes blazing a trail for Polish cuisine – diners can expect rustic sharing platters, to be enjoyed family style, with starters, entrees, deserts and of course, vodka.

Already on the menu are flavoursome chicken broth (rosol), silesian dumplings (kluski slaskie), pierogis and meatballs (kotlety). There’ll also be schnitzel with crushed dill potatoes (schabowy z okraszanymi ziemniakami) and a selection of pickles, salads, potatoes and greens. For desert, cheesecake (sernik), poppy seed cake (makowiec) and apple pie (jablecznik) will tempt guests to indulge their sweet tooth, all washed down with vodka and salt and a range of other traditional beverages.

The Polish Feast is part of Chef Wawrzyniak’s personal mission to make one of the last undiscovered cuisines a firm art of British food culture. Inspired by his childhood in Poland and influenced by stints in the Ireland, France, Denmark and Germany, Polish Feast lifts the lid on fresh, in-season produce and old family favourites.

He said, “I’m very excited to kick off my Polish Feast Food Tour at Centrala in Birmingham. So few people have tried true, authentic, homemade traditional Polish food. I’ve had the idea of a food tour for a while now, after cooking the first Polish Feast in the FIFTEEN kitchen this summer. Polish food is still largely undiscovered in Great Britain, so this is a chance to be part of something very special. We Poles love food and feasting and to talk about how dishes were prepared by our mums, aunts and grandparents.

“For me, the tour is a very special journey of love, flavours, passion and happiness. Each stop will pack in as many meat, fish and vegetable dishes as possible, with different dishes as seasonal produce changes. Along with my group of amazing chefs, we’ll celebrate our food culture by describing each dish, its history and ingredients, sharing our experiences and encouraging everyone to dig in and try something new!”

26th of February: Birmingham at CENTRALA

14th of May: Skegness at GROSVENOR HOUSE HOTEL

19th of May: Sheffield at INOX

Polish Feast 2017 is sponsored by Grant Sous Vide and Sous Vide Tools. It is supported by the Polish Tourist Association with the Polish Embassy holding honorary patronage, saying “We are pleased to announce that the Polish Embassy in London took Honorary Patronage over the First Ever Polish Culinary Tour across Great Britain.”

To find out more about and book tickets for the Centrala Food Tour stop on 26 February, between 1pm – 5pm, visit https://www.eventbrite.co.uk/o/damian-wawrzyniak-8626520885.

Damian Wawrzyniak is an award-winning chef, TV presenter and author. He is a Master Craftsman at Guild for Chefs UK with experience in two Michelin Star restaurants including the world’s best restaurant, Noma in Copenhagen. Chef Wawrzyniak ran the Champagne & Seafood restaurant at the London 2012 Olympics & Paralympics. He is currently consulting on restaurant openings around the world including Hong Kong and London, and planning his very own restaurant.