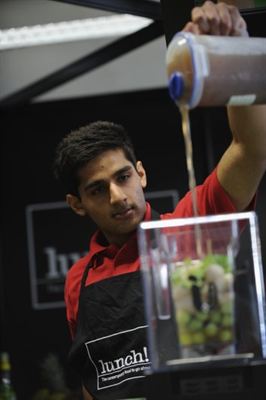 ​The organisers of lunch!, Diversified Business Communications UK, has reported a substantial 24% increase in attendance for the third edition of its food-to-go trade show.  A total of 3115 attendees, including the senior decision-makers from the UK’s £11.3bn out of home food and drinks sector, came out in force to do business with over 160 of the industry’s most innovative manufacturers and suppliers at Old Billingsgate, London, on Thursday 30 September and Friday 1 October.

Despite falling attendances at many recent food trade shows, lunch! has really caught the imagination of everyone involved in this important sector.  The event has grown from strength to strength since its inception in 2007 – winning a Best UK Trade Show Award from the Association of Event Organisers (AEO) in June and boasting significant increases in both overall attendance (up 24% compared to last year, which was itself up 28% on the previous year), and exhibitor numbers (up 40% on 2009). Carsten Holm, Managing Director of lunch!, is delighted by the overwhelmingly positive feedback received so far from visitors and exhibitors alike:  “Rarely have I witnessed such a successful and positive show.  Everyone enjoyed the relaxed atmosphere and focused business environment, and everyone went away buzzing with new business ideas.”

Exhibitor Tanya Brittain from The Phat Pasty Co hailed the show a huge success, commenting:  “If we wrote a wish list of the people we would like to meet at lunch! to approach with our brand – we have certainly ticked all the boxes.  There are senior people from all the major players here.  I have a five hour journey home after the show ends and I will have a big smile on my face – it has been brilliant.”

Ashley Pinder, Foodservice Sales Manager UK & Ireland from Discovery Foods, was equally upbeat: “We are very happy.  There is an excellent calibre of visitor from the leading retail chains and the Independent retailers.  We have seen more overseas visitors this year too.  lunch! has gone from a London event to a countrywide show.”

lunch! is renowned for its exceptional show content and the show’s highly-anticipated Keynotes and lively topic-focused panel discussions were all very well-attended.  The 2010 show also included the unveiling of the first ever Innovation Challenge awards to a standing-room only crowd.

Launched at this year’s lunch! to promote and celebrate genuinely new ideas in the market place, including brand new innovations and new twists on established concepts, the Innovation Challenge was open to all companies in the sector.  The judging panel (which included Felicity Aylward – Marks & Spencer, Dan Silverton – Soho Sandwiches, David Kitchener – Essential Cafe, and Jim Winship – the BSA) considered nearly 50 entries before bestowing 7 COMMENDED and 2 highly-coveted GOLD awards to the following deserving winners:

“A wonderful show.  Lots of genuine interest, and some heavyweight leads.  Winning the Innovation Award was just the icing on the top.  We’ll definitely be back next year!” says Paul Dooley, co-founder of Filbert’s Fine Foods.

It’s not just the products that were up for awards at lunch! however but the individuals who promote and serve them to the end users too!  Celebrating excellence amongst inspirational retailers who continue to push the boundaries of innovation and differentiation, the lunch! Retailer of the Year Awards serve to underline the quality that abounds within the ‘grab and go’ industry.  Judged by a panel of experts (which included Jesper Toft, founder of Toft Foods, Philip Brown, founder of independent sandwich shop chain Philpott’s, Peter Bartlett, co-founder of Hazlewood Foods, and the BSA’s Director Jim Winship), the awards are split into three main categories: lunch! Independent Retailer of the Year, lunch! Multiple Retailer of the Year, and lunch! Contract Caterer of the Year.

This year’s winner of the lunch! Independent Retailer of the Year is POD, the UK’s fastest growing healthy fast food chain.  Aiming to have 20 stores by 2011, growing to 70 stores in 2014, as well as plans to expand internationally, the judges commented on POD’s “strong branding, clear values, its loyal and increasing customer base, and its strong growth” as key elements in their decision.

Upon announcing the winner of the lunch! Multiple Retailer of the Year 2010 as Marks & Spencer, the judges summed it up by saying: “Well, they’re just brilliant!  Innovative, great quality and service, and value for money!”  Winners of this category for the second time, Marks & Spencer continue to grow and innovate, expanding onto petrol forecourts and service stations, and introducing hot food on the move counters.

This year’s winner of the lunch! Contract Caterer of the Year Award is Talkington Bates.  Still a relatively small company by contract catering standards, the judges cited its: “strong culture, effective management structure, and impressive growth” and praised the company’s real attention to detail.

One of the highlights of the show last week was lunch!’s prestigious British Smoothie Championships, sponsored by Usmoothie.  Vimal Depala, the youngest member of the Shaketastic team, was defending the title (won last year by his Shaketastic colleague Richard Debson) with his delicious smoothie ‘Eastern Envy’; combining lychee, melon, and freshly-squeezed pear juice, spiced with ginger, coriander and lemon grass.  After several exciting heats, the thrilling live final – which included a nail-biting tie-break – saw Depala beat James Hughes from Shaake and Indy Wilson-Fish from Lancaster’s Juicafe to win the title of nation’s best.  Aside from winning a wealth of industry kudos, Depala’s prize also includes £300 cash; plus a Blendtec Blender worth nearly £1,000.

Vimal Depala, 18, the newly crowned British Smoothie Champion 2010, was heard to say that winning was “one of the biggest moments of (his) life”, whilst Josh Kettle, Skaketastic’s Director, commented:  “This is the second year that we’ve won and it’s a huge thing for us.  A lot of hard work and teamwork has paid off.  We are very proud of Vimal.”

lunch! is a new type of trade show aimed at serving the needs of the £5billion quality lunchtime food-to-go market.  Developed in consultation with leading industry suppliers and retailers, lunch! is now firmly established as the essential event for the out of home food industry.  It offers food-to-go buyers an excellent opportunity to source new products, find out about all the latest market trends and network with 1000's of industry professionals all in one dedicated arena.