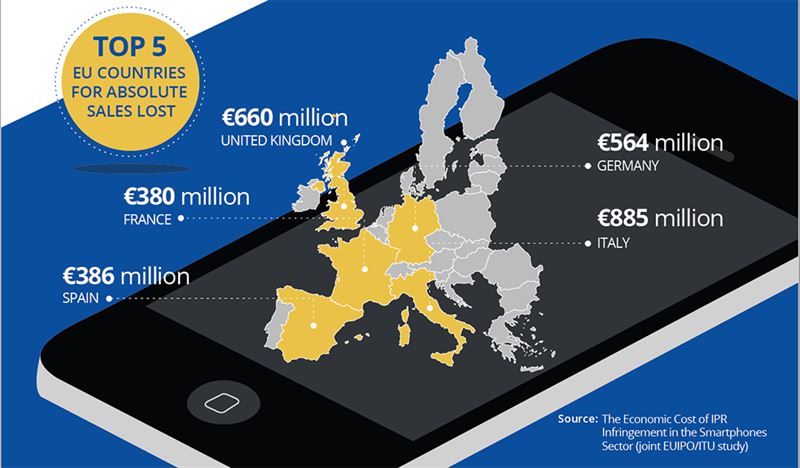 EUR 45.3 billion lost worldwide due to fake smartphones in 2015

A new report from the European Union Intellectual Property Office (EUIPO), in collaboration with the International Telecommunication Union (ITU), estimates that 184 million fewer smartphones were sold by the legitimate industry in 2015, due to the presence of counterfeit devices in the marketplace.

The report estimates that in 2015, 12.9 % of legitimate sales of smartphones were lost worldwide due to the presence of counterfeits in the market – equivalent to EUR 45.3 billion.
The report analysed the number of smartphones sold in 90 countries in every region in the world, based on point-of-sale tracking of consumer purchases.

In 2015, 1.3 billion smartphones were sold worldwide, meaning that approximately one out of every six people on the planet purchased a smartphone that year, at an average cost of EUR 275.
In the European Union, 150 million devices were sold in 2015, one for every three EU citizens. The effect of counterfeiting in the EU-28 is estimated at 14 million units in 2015, corresponding to 8.3 % of the sector’s sales, or EUR 4.2 billion.

Based on the data available, for other regions, 21.3% of sales were lost due to counterfeiting in Africa, 19.6% in Latin America, 17.4% in the Arab countries, 15.6% in China, 11.8% in the Asia-Pacific region and 7.6% in North America in 2015. China accounts for one third of the total global revenue loss in the smartphone sector.

At the EUIPO, through our reporting and analysis, we are building a picture of how counterfeiting and piracy affect key economic sectors. This is our first report in this series which analyses a sector both inside and outside the EU. Its estimate that 12.9% of legitimate sales of smartphones were lost globally in 2015 can act as a powerful message for policymakers, and all who work to combat counterfeiting worldwide.

Counterfeiting affects economic growth as well as consumers’ health. I am pleased to see that our collaboration with EUIPO helps to raise awareness about the social and economic consequences of counterfeited smartphones. It is our responsibility to take steps to protect consumers.

Today´s report is the eleventh in a series of studies released by the EUIPO via the European Observatory on Infringements of Intellectual Property Rights into the economic impact of counterfeiting in industrial sectors in the EU. This report is the first study in the series with a worldwide scope. The series previously looked at: the pesticides sector, the pharmaceutical sector, the spirits and wine sector, the recorded music sector, the handbags and luggage sector, the watches and jewellery sector, the toys and games sector; the sports goods sector; the clothes, shoes and accessories sector; and the cosmetics and personal care items sector.

In Italy, lost smartphone sales due to counterfeiting are estimated at EUR 885 million in 2015, with an estimated 15.4 % of revenue lost for the legitimate industry.

In the UK, lost sales due to counterfeiting are estimated at EUR 660 million in 2015, with an estimated 5.7 % of revenue lost for the legitimate industry.

In Germany, lost sales due to counterfeiting are estimated at EUR 564 million in 2015. Germany’s estimated lost revenue for the legitimate industry is one of the lowest in the EU at 5.7 %.

In Spain, lost sales due to counterfeiting are estimated to be EUR 386 million in 2015, with an estimated lost revenue of 10 %.

In France, lost sales due to counterfeiting are estimated at EUR 380 million in 2015, with an estimated 8 % of revenue lost for the legitimate industry.

The EUIPO is a decentralised agency of the EU, based in Alicante, Spain. It manages the registration of the European Union trade mark (EUTM) and the registered Community design (RCD), both of which provide intellectual property protection in all 28 EU Member States, as well as carrying out cooperation activities with the national and regional IP offices of the EU. Up until 23 March 2016, the EUIPO was known as the Office for Harmonization in the Internal Market (OHIM).

The European Observatory on Infringements of Intellectual Property Rights was established in 2009 to support the protection and enforcement of intellectual property rights and help combat the growing threat of IP infringements in Europe. It was transferred to the EUIPO on June 5 2012 by Regulation (EU) No 386/2012 of the European Parliament and of the Council.

The International Telecommunication Union (ITU), based in Geneva, Switzerland, is the United Nations specialised agency for Information and Communication Technologies (ICTs), with responsibilities that include among others the allocation of global radio spectrum and satellite orbits, the development of technical standards that ensure networks and technologies seamlessly interconnect, and efforts to improve access to ICTs to underserved communities worldwide.