A campaign by the Children and Youth Foundation aims to bring attention to the severity of the continuously growing problem. 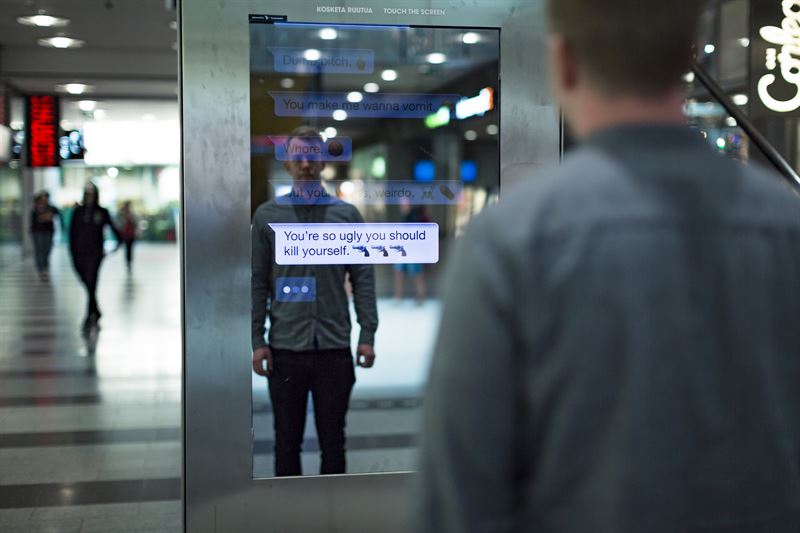 People tend to reminisce over their youth and have high hopes of re-living those golden years. However, such daydreams were effectively shattered by the Children and Youth Foundation’s recent campaign that brought internet bullying into everyone’s view. While school bullying has decreased during the last few years, online bullying has become growingly common.

Bullying is no longer limited by place or time

To remind people about the severity of online bullying, The Children and Youth Foundation brought it out to the streets. The campaign was designed by disruption company TBWA\Helsinki and executed in collaboration with Clear Channel and the Kamppi Shopping Center.A digital outdoor billboard was replaced with a mirror that invited passers-by to experience youth again. When a viewer stepped in front of the mirror, insults began to appear on top of their reflection. All the insults were authentic comments, chosen from real online conversations.

– Bullying and discrimination are no longer limited by place or time. Today, they can intrude every moment of the day, never leaving the harassed alone. With our campaign, we wanted to bring attention to this phenomenon that gets ignored all too often and is an unfortunate part of many young people’s lives every day, Olli Alanen,executive director the Children and Youth Foundation, explains.

While time spent on social media and other online channels has increased, so has online bullying. A common pattern to internet bullying is that harassing material is posted online, where it spreads uncontrollably and is difficult to remove entirely. In addition, anonymity lowers the threshold for inconsiderate online behavior.

Both the bullies and the harassed need help and support

Bullying significantly decreases well-being and can inflict deep wounds on its victims. It also increases the risk of dropping out of school. Studies show that in addition to their victims, bullies too, suffer from several problems, such as weak social skills. To solve the issue and deplete its consequences, we need to support both the harassed, and the harassers.

– Bullying can be intervened, and the underlying problems solved. We’ve managed to reduce bullying by systematic, nationwide work. Next, we need to focus on decreasing online bullying and discrimination. Long-term cooperation between different actors will definitely result in finding effective solutions, Alanen sums.

The Children and Youth Foundation

No society can afford to lose their youth. That is why the Children and Youth Foundation helps young people in difficult life situations with creative and functional methods. With the help of these methods young people themselves can strengthen their life skills and find their place in the community. The foundation works both in Finland and in developing countries together with local experts.

The Children and Youth Foundation executed the campaign together with the disruption company TBWA\Helsinki, Clear Channel and shopping center Kamppi.