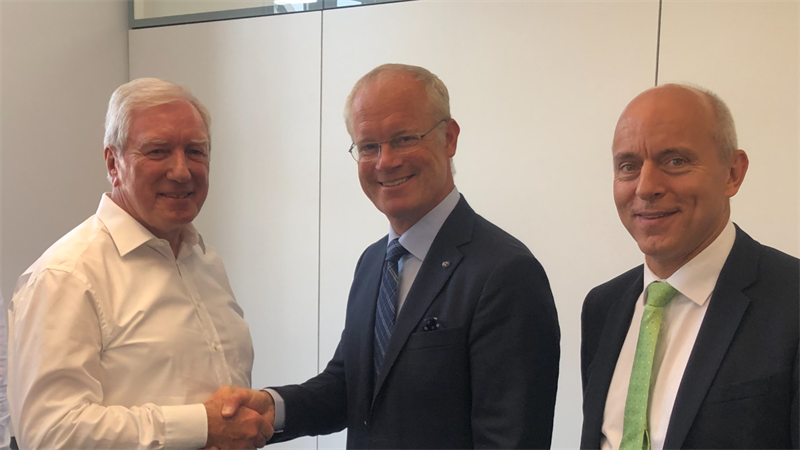 The manufacturing strategist HANZA Holding AB (publ), listed on Nasdaq Stockholm, has today acquired the German manufacturing group RITTER Elektronik GmbH, with production facilities in Germany and the Czech Republic. The total purchase sum amounts to approximately 12 MEUR and consists of a cash part and a share part.

The acquisition strengthens HANZA's offering, opens up Germany as a new customer market, and contributes to increased earnings per share. For the previous year (2018), total sales for HANZA and RITTER amounted to SEK 2.26 billion with a total EBITDA result of SEK 164 million.

"We are now passing an important milestone for HANZA, in line with our business model and expansion plan," said Erik Stenfors, CEO of HANZA. "It is also another example of how we use our strong cash flow to create a financial position that enables the continued development of HANZA. The transaction means that we increase the value to current customers, while at the same time positioning ourselves for new market shares in the extensive German market."

Description of RITTER Elektronik GmbH, the deal and financing
The acquisition comprises a production plant in Remscheid, Germany with approximately 180 employees, which offers manufacturing of electronics, mechanics and final assembly, as well as a production unit in Zabreh, Czech Republic, with approximately 110 employees, offering manufacturing of electronics, mechanics and advanced final assembly. The unit in the Czech Republic is geographically close to both HANZA's mechanics factory in the Czech Republic and HANZA's electronics factory in southern Poland.

The annual turnover in RITTER in 2018 amounted to approx. EUR 42.7 million, with an operating profit of approx. 4.9 MEUR. The net debt in RITTER, adjusted for IFRS, is estimated to amount to approx. EUR 8.3 million. Final financial data will be presented after the complete acquisition analysis, with adaptation to IFRS, which will take place after the acquisition.

The purchase price consists of a cash part of EUR 7.2 million paid at the time of the acquisition, and 3,000,000 shares in HANZA. Based on the current price of the HANZA share, the total purchase price amounts to approximately EUR 12 million, which corresponds to a preliminary enterprise value (EV) of EUR 20.3 million.

To finance the cash portion of the purchase price, HANZA has raised a long-term bank credit of EUR 7.2 million under market-based credit terms. In connection with this, the company has agreed on credit terms (covenants) vis-à-vis the bank, linked to net debt / EBITDA (rolling 12-month value) as follows: 3.25 as of September 30, 2019, 2.75 as of December 31, 2019 and 2.5 per 31 March 2020 and beyond. After the acquisition, HANZA will review its other loan financing for any updating of the credit terms due to the acquisition.

For the share portion, HANZA's Board of Directors has today exercised the authorization received at the Annual General Meeting on May 7, 2019, and decided to carry out a directed new issue of 3,000,000 shares to the seller of RITTER. The subscription price in the new share issue is 15.71 SEK per share, i.e. a total of approx. 47.13 MSEK. The price corresponds to the volume-weighted average price for the Company's share on Nasdaq Stockholm during the period July 11 - 24 2019, which represents the market value assessed by the Board.

Payment for the shares will be made by contributing capital in the form of a share in RITTER. The share capital is thereby increased by SEK 300,000 and the number of shares in HANZA after the issue is 33,979,928. The new share issue represents an increase in the number of shares in approx. 8.83%. The seller of RITTER, the industrial group RITTER Beteiligung GmbH, thus becomes one of the larger individual owners in HANZA. The seller has undertaken not to sell the shares (through a so-called lock-up agreement) until July 25, 2020.

Financial information
Below is an estimate, how the HANZA Group's income statement looked hypothetically, if RITTER had been included in the Group during the financial year 2018, based on financial information from RITTER. These figures are preliminary, since the complete acquisition analysis and adaptation of Ritter's figures to IFRS have not been completed.

About Cluster Central Europe
HANZA has engaged Willibald Berger, a German expert in the manufacturing industry, with a successful history of launching Swedish operations in Germany. Berger has been appointed President of HANZA's cluster in Central Europe, which now consists of HANZA's former two factories in the region, as well as the two now acquired units. In total, the cluster is estimated to comprise approx. 450 employees with an initial sale of approx. SEK 650 million.

This information is such information that HANZA Holding AB is obliged to publish in accordance with the EU Market Abuse Regulation. The information was provided through the above contact person's agency for publication on July 25, 2019, at 14.15.

About HANZA
HANZA is modernizing and streamlining the manufacturing industry. By gathering different manufacturing technologies locally, we create shorter lead times, more environmentally friendly processes and increased profitability for our customers. HANZA was founded in 2008 and is today a billion company with operations in Sweden, Finland, Estonia, Poland, the Czech Republic, Germany and China. Among HANZA's clients are leading companies such as ABB, Perkin Elmer, Atlas Copco and Kone. Read more at www.hanza.com

The shares in HANZA are listed on Nasdaq Stockholm.