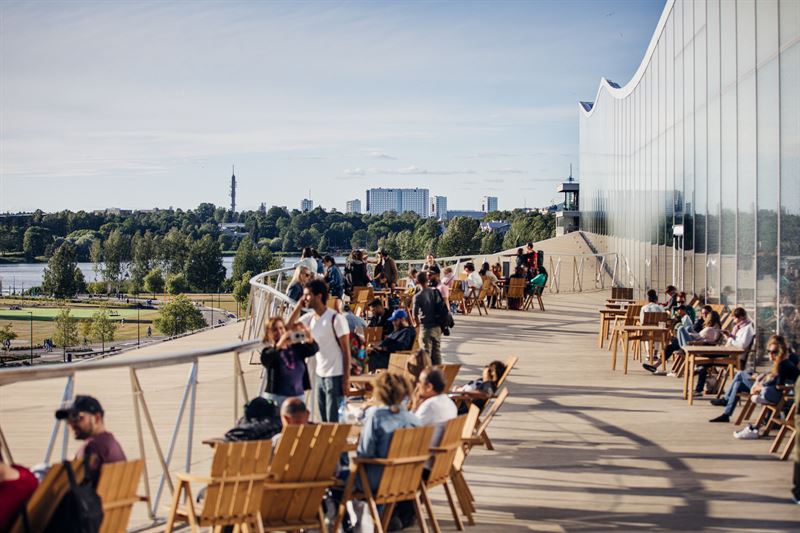 Helsinki hosted a record number of international congresses and meetings last year. The number was increased by EU Presidency meetings and events connected to the official programme. Helsinki's popularity has grown significantly over the past five years. According to the latest international survey, Helsinki has become the most popular congress city in the Nordic countries, ahead of Stockholm, Oslo and Copenhagen.* Finland and Helsinki are recognised worldwide as pioneers in sustainable development and this responsibility is now appealing also to international congress and event organisers. Helsinki Marketing, together with the Woltti Group, has developed concrete guidelines to help organise responsible B2B events.

According to the latest statistics from the Finland Convention Bureau, a record number of congresses were held in Finland in 2019. A total of 835 international association meetings were held across the country, and they were attended by a record 136,413 delegates.

Helsinki hosted 395 of these meetings, or nearly half, and they were attended by 84,144 delegates, or approximately 62 percent of the total number of congress visitors in Finland. By comparison, Helsinki hosted 275 congresses in 2015 with 35,235 delegates.

“Helsinki’s appeal as a congress city has grown significantly over the past five years. Helsinki has gained a reputation for being a reliable city that is close to nature and where everything works smoothly. This explains why Helsinki has now become the most popular congress city in the Nordic countries, ahead of Stockholm, Oslo and Copenhagen*,” says Leena Lassila, Director, Global Sales, at Helsinki Marketing.

Focus now on international business meetings after the EU Presidency

The figures published by the Finland Convention Bureau include the 115 stakeholder conferences held in Helsinki. Official EU meetings are not included in the total number of congresses, however, as they are considered intergovernmental meetings and not association meetings.

In addition to EU meetings and international association meetings, numerous international business meetings were held in Helsinki last year. Although official statistics are not available, the number of meetings is known to be growing internationally and the market is huge. This is reflected in the exceptionally high occupancy rate of hotels in Helsinki.

“Helsinki is now focusing on growing conference tourism. The greatest interest in Helsinki is coming from Great Britain, where many agents seeking venues for international meetings are located,” Lassila says.

Responsibility is one of Helsinki key assets

The Nordic countries are recognised worldwide as pioneers in sustainable development. This is a key asset for Finland and Helsinki in the eyes of international meeting and congress organisers. Climate change is one of the biggest drivers of change that is affecting people's quality of life and the choices they make. Also within the event sector, there is a strong desire to combat climate change.

The City of Helsinki is committed to promoting sustainable development in all its activities. Helsinki has set a target of reducing its CO2 emissions by 60 percent by 2030 and becoming carbon neutral by 2035. This is in line with the UN's 2030 Agenda for Sustainable Development.

To promote responsibility within the event sector, Helsinki Marketing and Woltti Group have jointly developed a Sustainable Meeting operating model that aims to provide concrete guidelines for organising responsible meetings and congresses. The first pilot event organised in accordance with the model was held at Finlandia Hall in September 2019. The event helped gather additional information to support further development, for example about food waste and energy consumption. The carbon footprint of the pilot event was reduced to just 2.89 kg per person by making informed choices. By comparison, the carbon footprint of similar events is usually 6-8 kg per person.

“The Sustainable Meeting operating model is designed to help congress and meeting organisers find sustainable solutions for the entire lifecycle of the event, from communications to production. We will publish guidelines for organisers in March so that the ideas can be utilised by all event organisers in the future,” Lassila encourages.

“Our clients are increasingly demanding concrete measures from us in terms of sustainable development. Inspired by the pilot, we are now measuring the carbon footprint of our climate-friendly meeting package for clients. Finlandia Hall has drawn up a Commitment 2050 action plan, we are active in Business Finland’s Sustainable Travel programme and we have joined the City of Helsinki’s climate partners. All of these measures support the efforts that we have already made at Finlandia Hall towards sustainable development and responsibility,” says Minna Sauramaa, Marketing and Customer Experience Director at Finlandia Hall.

* Source: Union of International Associations (UIA) – Helsinki has climbed to 14th position in the rankings of the world’s most popular congress cities.