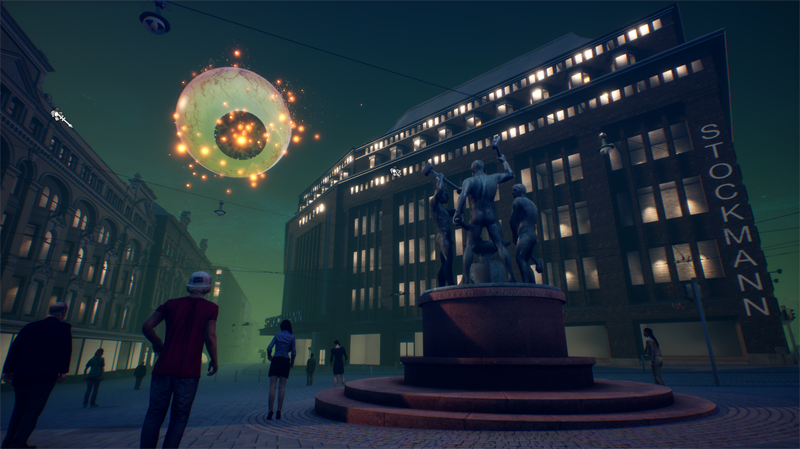 On Friday 12th June, The City of Helsinki will celebrate its birthday with a programme of online cultural events curated in collaboration with its citizens, taking place in the city’s digital twin - Virtual Helsinki - and culminating in a performance from Helsinki-born artist ALMA. The Finnish singer songwriter has generated over 150 million combined Spotify streams since the release of her acclaimed debut EP and is known worldwide for collaborations with Miley Cyrus and Tove Lo. ALMA will perform music from her debut album Have U Seen Her?.

Designed to be accessible as possible, audiences can tune in to the live performance with a smartphone or computer, choose an avatar and interact with ALMA in her enchanted “dreamscape” world inspired by growing up in Helsinki but created entirely from her imagination. The event is a collaboration between ALMA, creative director Taito Kawata, The City of Helsinki and Zoan.

“Helsinki Day is one of our biggest urban festivals and traditionally a communal celebration for the birthday of the capital city. This year we are proud to host ALMA in Virtual Helsinki. Having her historic concert as part of the festival programming makes this year even more special.”

The Helsinki Day festivities are part of the city’s ongoing efforts to celebrate the versatile creativity, freedom and innovation found in the city. The performance will take place in ALMA’s dreamlike virtual world and will feature cultural landmarks powered by Virtual Helsinki including the Amos Rex museum, which is currently showing Generation 2020, an exhibition presenting the works of over 80 young Finnish artists.

“Playing a VR show of this scale this was something I didn’t even know was possible to do! Something I've never done and something my fans probably haven't ever seen before! It’s the debut show of my album ‘Have U Seen Her?’ I’m so excited to share it like this. It’s amazing to be able to invite fans to step into the dreamworld we’re crafted digitally from my imagination.

Absolutely thrilled that the city of Helsinki is supporting my music and even more special that it’s happening on Helsinki Day! Welcome to my dreams and nightmares people! It's gonna’ be unreal!”​

The performance follows the success of the city’s virtual May Day event, which saw Finnish rap stars JVG perform for a live audience of 700,000 people, over 10% of Finland’s population.

Helsinki, which was crowned as the most innovative region in the EU by the European Commission in 2019 and awarded the European Capital of Smart Tourism in 2019, is at the forefront of technical innovation. With a democratic approach to data and knowledge sharing, the city operates much like a city-wide test bed. By facilitating public and private collaborations the city is demonstrating how policies like open data and digital twins can benefit citizens and visitors alike.

“Helsinki’s mission is to be the most functional city in the world. Under these extraordinary circumstances, this is more important than ever. Virtual Helsinki demonstrates how important it is for cities to be agile and adaptive, and how a crisis can be used as a driver for technical innovation and creativity.

While Virtual Helsinki has been used to create an alternative way of experiencing Helsinki and special communal moments this Spring, the platform is also now contributing to Helsinki’s creative economy by showing us that art and culture can still be created and celebrated by all during an international lockdown.”

The Alma Cyber Concert can be experience online on:

The city’s digital twin - Virtual Helsinki - is the result of a long-term strategic view into how the city uses its data, and the culmination of a two year partnership with VR studio Zoan.

Virtual Helsinki Day is the latest event to take place in Virtual Helsinki, following the unprecedented success of the virtual May Day concert which saw over 700,000 people tune into the virtual gig with Finnish rap stars JVG, totalling over 1.4million views by the end of the weekend.

While VR and 360-degree videos are used as a marketing tool by many destinations, Virtual Helsinki goes a step further, allowing visitors to move about freely in the digital simulation of Helsinki to explore at their own pace and create their own experiences in past, present and future time.

Through this virtual city, users can experience different parts of Helsinki, as well as participate in activities such as concert, exhibitions, meetings, and events. Virtual travellers can visit the historical centre of Senate Square, the home of famed Finnish architect Alvar Aalto, and archipelago island Lonna Island. Destinations and landmarks will be added to the experience over the coming months including Vallisaari Island.

Virtual Helsinki is a major initiative forming one part of the City of Helsinki’s overarching digital strategy, which sets ambitions for the city to become the virtual capital of the world. The initiative is the culmination of a longstanding partnership with Helsinki-based studio Zoan. A digital twin of Helsinki has been built in Unreal Engine using 3D modelling from open data provided by the city, Zoan merged this with a series of drawings, hand-crafted modelling and imagery to create one of the world’s most realistic VR experiences. Zoan was awarded second prize at the 2019 Unreal Awards: Experience Design for the design of Virtual Helsinki.

In the future, Virtual Helsinki will also serve as a digital platform that will enable service providers to run their businesses through the platform.

Helsinki has ambitious goals in the pioneering and promoting of sustainable tourism, aiming to become a carbon neutral city by 2035. In developing Virtual Helsinki, Helsinki recognises the unique role that cities play in creating solutions to enable changes in lifestyles to address the global climate crisis.

Virtual Helsinki, Sound of the Seasons can be experienced on YouTube: