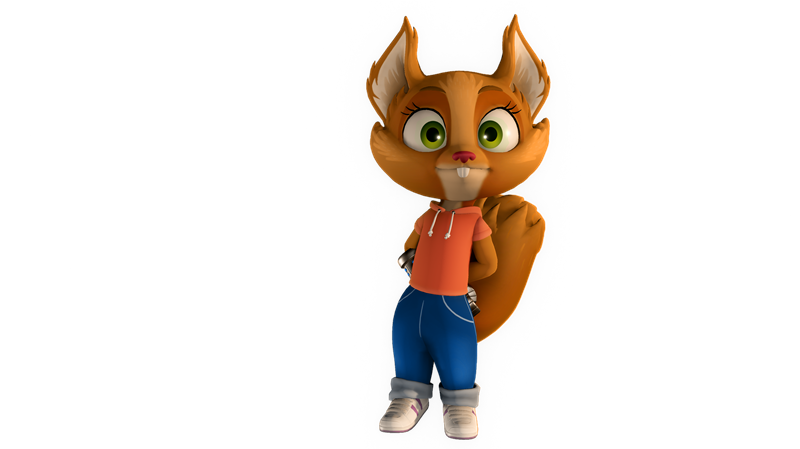 The next original series from Nordic Entertainment Group (NENT Group) will be kids’ show ‘Fixi in Playland’, which mixes animation with virtual reality (VR). The Fixi character will appear in both the new series and as a virtual guide to the kids’ section on NENT Group’s Viaplay streaming service. ‘Fixi in Playland’ is the first production from NENT Group's StudioV virtual entertainment studio and will premiere exclusively on Viaplay across the Nordic region in autumn 2019.

‘Fixi in Playland’ (Swedish: ‘Fixi i Playland’) is a 20-part animated series featuring Fixi, a lively squirrel with a robot arm who encourages viewers from ages 5 to 8 to take an interest in both technology and physical exercise. The series is created by StudioV using performance capture and VR animation technology, and is produced by Alexander Gustafsson for SplayOne, a NENT Studios company.

The character will also appear as a virtual guide in the Viaplay kids’ section, where Fixi will help children use the service and recommend films and series. The concept is created by Swedish TV host and scriptwriter Sara Edwardsson.

‘Fixi in Playland’ is NENT Group’s latest original series for kids after ‘Saga’s Stories’; ‘Peppy Pals’ and ‘The Great Escape’, which was named Children’s Programme of the Year at Sweden’s Kristallen awards in 2017.

Jakob Mejlhede Andersen, Viaplay Chief Content Officer: “NENT Group offers the best streaming experience in the Nordic region – and we believe inspiring younger viewers is an important part of that experience. Understanding the latest technologies, while staying active and healthy, are some of the biggest challenges of growing up today. Fixi brings a fresh and engaging personality to Viaplay’s kids’ offering, both as the star of an innovative show and as a virtual guide, and will deepen our relationship with our viewers while opening a new chapter in NENT Group’s award-winning kids storytelling.”

As well as breaking Nordic viewing records, NENT Group’s originals are increasingly reaching audiences around the world. ‘ALEX’ has been sold to broadcast and streaming partners in Europe, Asia and the US; ‘Veni Vidi Vici’ has premiered on Hulu and is set for a US remake in partnership with Lionsgate; ‘Swedish Dicks’ has featured on Pop TV in the US; ‘Black Lake’ has been shown on BBC Four and AMC Networks-backed Shudder; and the upcoming series ‘Honour’ has been sold to Belgium’s VRT.