Åland Curling and the Vianor Curlingcenter situated in Eckerö on Åland will host the Paf Masters Tour 12-15 October 2017. The curling event is a part of the Curling Champions Tour (CCT).

A total of 12 teams will meet in the Paf Masters, which is the first event of its kind in Finland part of the Nordic tour.

The Curling Championships Tour is the highest-ranked curling tour for both men and women in Europe, the United States, Canada and Asia. The tour also collaborates with the North-American World Curling Tour. The local organizer for Paf Masters is Ålands Curlingklubb.

- The 2017 season is extra exciting, since many of the teams will participate in the Olympic Qualification Event hosted by the Czech Republic to pick the teams that will go on to compete in PyeonChang in South Korea, says Mari Hansen from Åland Curling.

Paf Masters is a four-day tournament, which will be broadcasted live on World Curling tv as well as on Yle Areena. The prize pot for masters tournaments in CCT is at least €18,600.

- We have organized many international events in recent years, for example the Nordic Junior Curling Tour and women’s Finnish curling championships, says Thomas Jonsson, Chairman of the Board at Ålands Curlingklubb.

- Hosting Paf Masters is a welcome challenge for us and a great opportunity to show what we are capable of, Jonsson continues.

The main sponsor of the event is the Åland-based money gaming company Paf.

- We are thrilled to have the opportunity to host a women’s elite masters tournament here on Åland. It’s a great honor for us to support an event of this caliber, says Ludvig Winberg, Corporate Sponsorship Manager at Paf.

- The ice was in mint condition, which we thank the hosts for. We all look forward to October and the Paf Masters, Kauste says.

Paf was founded on Åland in 1966 with the clear purpose of creating profit to support public good. This is still the company’s primary purpose. Today Paf.com is an international gaming operator with over 200 games including slots, casino, poker, betting, bingo and lotteries. Paf also operates a large physical gaming operation on land and sea with about 1,500 slot machines and 55 gaming tables on ships in the Baltic Sea, in Paf Casino on Åland and Casino Sunborn in Gibraltar. Paf offers safe and socially responsible money games that give players pleasure and entertainment.

In 2015 the Paf Group had a total revenue of 110 million euros producing a profit of 22.7 million euros. The contribution to public good was 20 million euros. The group has nearly 400 employees, is headquartered in Mariehamn on Åland and serves players from countries including Finland, Sweden, Estonia, Spain and Italy. Paf is licensed and controlled by the local Åland government. More information can be found at www.paf.com. 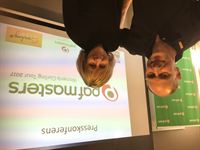