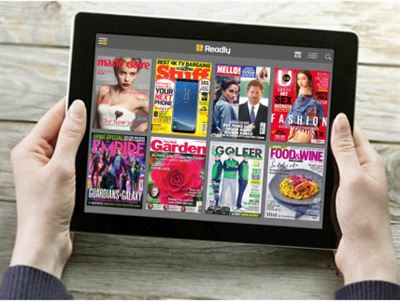 Data released today shows an 80% increase in digital magazine consumption with over 13 million magazines read in the last year.

According to Readly digital newsstand, over the last twelve months, its subscribers spent a total of 22 million hours reading digital magazines, with an average of 22 minutes per session and 7 hours a month.

The top three categories highlighted in the research included women’s interest, celebrity & entertainment and home & garden with titles such as HELLO!, OK! & Heat being the most read.

Ranj Begley, Chief Content Officer at Readly said: “The digitalization of magazines is allowing more people to read curated content whenever they choose. Many people have had enough of the "fake news" offered through social media channels and are seeking editorially balanced, trusted content which may explain the increase in digital magazine consumption.”

The data showed that Hello! Magazine knocked OK! magazine off the top slot from the previous year, Heat magazine has jumped up three places while Closer has slipped back and new titles, Woman and Best magazine, have been added to the Readly ranking.

Whilst women’s top titles were mainly celebrity and gossip-led such as OK!, Hello!, Closer and Heat magazine, men’s most popular titles read were reported to be Autocar, T3, Stuff, What Car and Playboy. Readly’s data also shows that while consumers are loyal to their favourite titles as their core read, they are also trying new content across the app in quite an experimental way.

Furthermore, 8% of magazines read by British users are foreign titles pointing to an appetite for keeping abreast of news, trends and gossip overseas too.

Consumers also reported that digital magazines have enhanced their lives with reasons including access to more varied content (100%), lighter travel with no need to carry heavy magazines (77%), time saved by accessing content when needed such as recipes or news (70%), learning something new (55%) and reading in places they wouldn’t have been able to before (55%).

The more surprising places for digital magazine consumption as reported in research include inside the Channel Tunnel, at a horse racing meeting and in a van when it’s pouring down with rain!

Whilst 14% of respondents said that they read at the hairdressers or during a beauty treatment, 7% read at the gym and 5% read at work, whilst working! With over 1009 titles available to UK consumers through the Readly app, there’s a magazine for every moment whether it be inspiration, news, recipes, tech, health or celebrity gossip.

Readly is a digital newsstand which provides “all-you-can-read” access to hundreds of national and international magazines in one app. The release of its usage data for the last year shows that digital reading is booming.

Ranj Begley, Chief Content Officer at Readly said: “Reading magazines has evolved over the past five years with the digital consumer demanding quality content at their fingertips via their smartphone or tablet. We’re seeing more magazines being read even in the most curious locations as people access their favourite title or try something new on the go or at home, whenever they have a moment.” 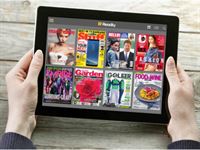