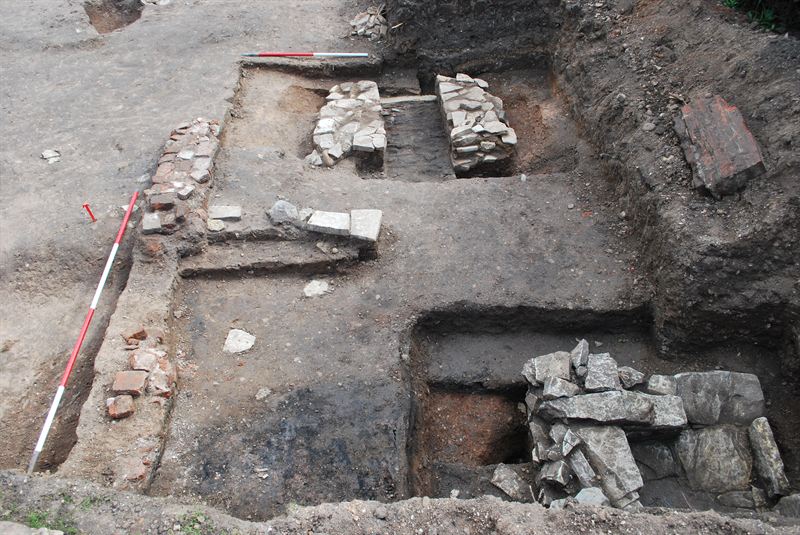 An archaeological dig led by the University’s Centre of Archaeology discovered the site of Shakespeare’s ‘kitchen’ at New Place which was the bard’s family home at the height of his career for almost two decades.

The team uncovered an ‘oven’ (or fire hearth) and ‘fridge’ (or cold storage pit), as well as evidence of the brew house where beer was made. Fragments of plates, cups and other cookware were also found.

Kevin Colls, Archaeological Project Manager for the Centre of Archaeology, has been working with the Shakespeare Birthplace Trust since 2009 on a project to rediscover and ultimately open New Place to the public next year.

“These findings are really exciting. We knew that this area of the site was going to be important but we hadn’t been able to explore it until this year because a tree prevented us excavating.” explained Kevin.

“We hadn’t found that much on the site dating back to Shakespeare’s era before this so the kitchen features including the oven and the fridge are very significant. This is the area of the house that Shakespeare actually lived in and tells us more about him and his lifestyle.”

The dig has helped establish the size of New Place enabling the Shakespeare Birthplace Trust to commission new evidence-based drawings which depict an accurate version of how the house would have looked during Shakespeare’s ownership. Alongside the findings contemporary to Shakespeare, the dig also revealed early medieval foundations and Iron Age archaeology.

Dr Paul Edmondson, the Shakespeare Birthplace Trust’s Head of Research and Knowledge, said, “Finding Shakespeare's ‘kitchen’ proved to be a vital piece of evidence in our understanding of New Place. Once we had uncovered the family's oven we were able to understand how the rest of the house fitted around it.”

He added: “A much richer picture of Shakespeare has emerged through the course of our excavations.”

The £5.25 million project – the most ambitious and permanent initiative to mark the 400th anniversary of Shakespeare’s death being celebrated throughout 2016 – is being funded with support from the Heritage Lottery Fund and Historic England and through public donations raised through a host of initiatives spearheaded by the Shakespeare Birthplace Trust.

'Finding Shakespeare's New Place: An Archaeological Biography, produced by The Shakespeare Birthplace Trust and the Centre of Archaeology, Staffordshire University, is to be published by Manchester University Press in the summer of 2016.

Staffordshire University is developing to meet the needs of modern day learners and current and emerging industries. Vocationally inspired, the University offers courses across a wide range of subject areas.  The Research Excellence Framework (REF) 2014 determined that 78 per cent of the University’s research is world leading or of international importance.

Staffordshire University is developing to meet the needs of modern day learners and current and emerging industries. Vocationally inspired, the University offers courses across a wide range of subject areas. The Research Excellence Framework (REF) 2014 determined that 78 per cent of the University’s research is world leading or of international importance.