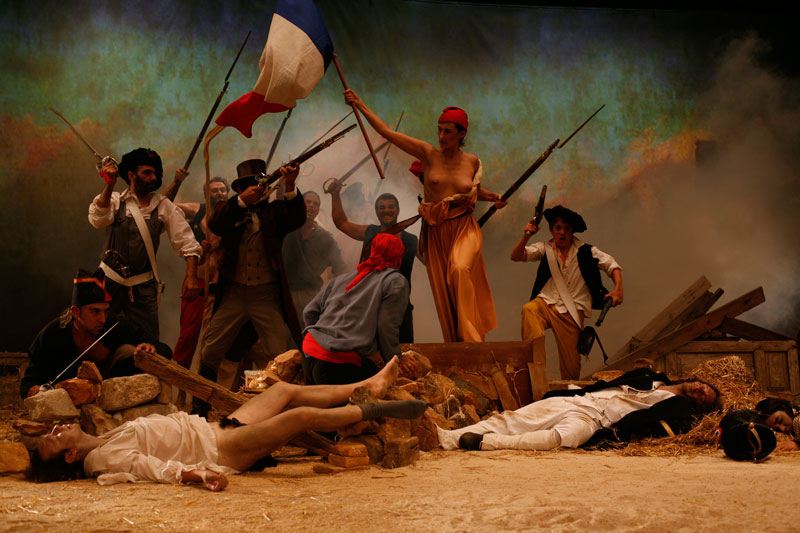 This years Summer Exhibition at the Art Gallery of Bohuslän Museum features The Spanish artists Cristina Lucas and Fernando Sanchez Castillo. They use a variety of media to highlight society´s power structures. Fernando Sanchez Castillo is most famous for his work "Tank Man", which alludes to the events at Tiananmen Square in 1989, when a young man stood in front of a tank and forced it to stop.

Cristina Lucas and Fernando Sánchez Castillo, both from Spain, work with video, sculpture and a variety of other media, and have both taken part in major international exhibitions and art biennials in recent years. Common to both artists is their deep interest in clarifying and analysing historical, economic and gender-related power structures which they portray in a powerful visual language. This summer, for the first time, they are exhibiting jointly at Bohusläns museum.

The title of the exhibition, Revolutionary Micro Gestures, may allude to the moral courage that is apparent in the actions of individual people that can change the world they live in as well as a historical process. They can refer to the unknown rebel who, with his or her own body, can symbolize resistance to a whole world and yet remains anonymous. They can be concerned with a freedom of interpretation in the sense that music played by an orchestra takes shape under the direction of the conductor whose gestures and movements bring a composer’s score to life. From the body, from time and from space a minimal movement can bring about transformations in our experience of the world both in history and in our own time. The present exhibition includes two works by Fernando Sánchez Castillo, ‘Tank Man’ and ‘Made in China’ and two works by Cristina Lucas, ‘La Liberté raisonée’ and ‘Number 5’.

Tiananmen Square
Fernando Sánchez Castillo’s work often takes its point of departure in political history with a particular emphasis on researching violence and the misuse of power. He has interested himself in the attributes of monuments to royalty, political leaders and dictators throughout history and in his own art he reinterprets them. One of Fernando Sánchez Castillo’s best-known works is his ‘Tank Man’ from 2013. This work alludes to an episode on Tiananmen Square in 1989 when a young man wearing a white shirt placed himself in front of a tank and forced the entire military column to come to a halt. A moment later he was pulled to safety by some other people on the square and he disappeared into the crowd. The ‘Tank Man’ became an international symbol of protest for the individual who opposes the system. Moral courage, or public spiritedness, can change history and so the artist has had thousands of miniature ‘Tank Man’ copies made which will be shown at the exhibition.

An ironic wink to the beholder.
Cristina Lucas works with a variety of media including video, sculpture, installations, photography, painting and animation. She is interested in the forces that govern our society and she clarifies and analyses them in her work, often including an ironic wink to the beholder. As her point of departure she can take an official version of history or something from the collective memory that she will then transform and comment on. In several of her works she has also entered into dialogue with well-known works from the history of art.

In her video ‘La Liberté raisonée’ she is inspired by the painting ‘La Liberté guidant le people’ (Liberty Leading the People) from 1830, a painting by Eugène Delacroix. She brings the scene to life again by making use of real characters in her production. In the exhibition Cristina Lucas will also show her newly produced ‘Number 5’, in which five different conductors lead the orchestra in the first movement of Beethoven’s 5th symphony. All five use the same score but the performances are different with each conductor. This work is concerned with the freedom of art to interpret what in advance seems to be given.

There will be guided tours of the exhibition at 13.00 on the following days:

Internationally renowned artists
Fernando Sánchez Castillo was born in Spain in 1970. He is a graduate of the Complutense University of Madrid and has a Master’s degree in philosophy from the Institute of Contemporary Aesthetics at the Universidad Autónoma de Madrid. He has had solo exhibitions at the Centro de Arte Contemporáneo de Málaga (2011), Centre d' Art Contemporain Genève (2007) and at MARTa Herford (2006). He has also participated in group exhibitions at the Palais des Beaux Arts in Brussels, MARTa Herford, Tate Modern in London, MoMA in New York and at the 50th Venice Biennale.

Cristina Lucas was born in Spain in 1973. She studied Fine Arts at the Complutense University of Madrid and has a Master’s degree from the University of California, Irvine. She took part in the Istanbul Biennial in 2007 and the Sao Paulo Biennial in 2008. She has exhibited at numerous museums in different parts of Europe and is represented at the Centre Pompidou in Paris.

Starting from Madrid, Fernando Sánchez Castillo and Cristina Lucas have, over the years, lived in both Paris and Amsterdam where they have also both been an artist-in-residence at the Rijksakademie.