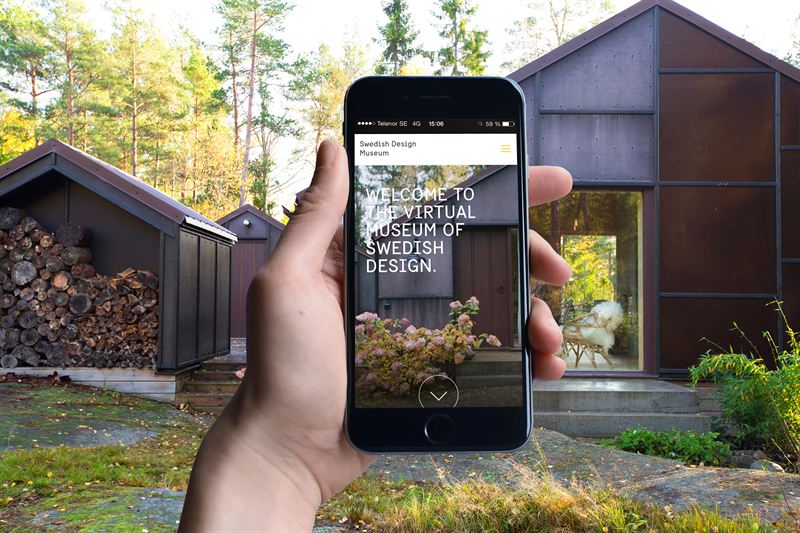 STOCKHOLM, Nov. 14, 2017 –– Sweden today announces the opening of Sweden’s First Virtual Design Museum, also its first design museum focusing on both architecture, design and fashion. The first exhibition, "Live from Sweden", offers visitors a glimpse into the Swedish lifestyle and the design objects Swedes surround themselves with.

Design and creativity is of huge importance socially, culturally and aesthetically to Sweden, and has a deep connection to the country’s progressive values since it is driven by the idea of equality for all. In Sweden, design is seen as a tool to solve problems in unexpected ways and challenge the status quo to create a better life for everyone.

The Swedish Design Museum is not your typical museum – it has no physical collection, and it’s a virtual museum with the purpose of making Swedish design accessible and visible to people in all corners of the world. Available at www.swedishdesignmuseum.com, the first exhibition called "Live from Sweden" includes eight design objects – shown through live streaming and video online – giving visitors the chance to catch a glimpse of Swedish life and the design objects Swedes surround themselves with.

“Design is important to the international travelers and is something they are curious about in relation to Sweden. The aim of the Swedish Design Museum is to exhibit design objects that have a deeper purpose than merely good looks. The exhibition "Live from Sweden" lets visitors catch a glimpse of Swedish design objects where they are being used by ordinary Swedes as part of their everyday life. Objects that are made to be used, and used again – not put on a pedestal or locked behind glass,” said Jennie Skogsborn Missuna, Chief Experience Officer (CXO) at Visit Sweden.

“Live from Sweden” features eight design objects within the fields of Architecture, Design and Fashion. These objects are:

The objects included in the Swedish Design Museum's first exhibition "Live from Sweden" have been chosen in collaboration with the following curators, design and fashion experts:

Eero Koivisto, designer at Claesson Koivisto Rune, an internationally acclaimed multi-disciplinary office with an equal emphasis on both architecture and design, and one of the design experts involved in choosing the objects shown in the first exhibition said:

"The whole idea of design in the North is that it’s inclusive – not exclusive – which makes it important to show how it’s used. And that’s where the ordinary people come into the picture. That’s who we work for.”

"An online museum can be visited by anybody, anywhere who have access to the internet. I find that idea very attractive. We are a small corner of the world, still with a very high international reputation in Architecture and Design. So it feels good to share and show this in an online museum", he continued.

Emma Jonsteg, architect at Utopia Arkitekter, and one of the design experts involved in choosing objects for the Swedish Design Museum:

"There is a lot of interesting and high quality design produced in Sweden. I think the world has a lot to learn from looking at the very best stuff produced here, and the Swedish Design Museum makes it easily accessible to everyone, everywhere", she concludes.

The Swedish Design Museum is launched on the 14th of November, and live streams of three objects included in the first exhibition will be conducted throughout the day on Wednesday 15th of November, live on Visit Sweden’s Facebook-page. The next exhibition is planned to open in 2018. Visit Sweden, the Swedish tourist organization is the initiator of The Swedish Design Museum. A virtual museum with the purpose of making Swedish design accessible  and visible to people in all corners of the world.

A longer description of the idea behind the Swedish Design Museum can be read here: [hyperlink to About-page]

Swedish Design Moves aims to highlight the innovative, bold and creative design that drives Sweden. It is based on the concept that Swedish design is not only shaped by Sweden’s culture, but Sweden’s culture is shaped by its design. Commissioned by the Swedish government, the scheme is led by Visit Sweden in collaboration with Architects Sweden, ASFB-Association of Swedish Fashion Brands, the Swedish Federation of Wood and Furniture (TMF) and Svensk Form.

Design and creativity is of huge importance socially, culturally and aesthetically to Sweden, and has a deep connection to the country’s progressive values since it is driven by the idea of equality for all. The Swedish Design Moves program highlights how Swedes channel their creativity and innovation into designing beautiful yet functional solutions for everyone, not just the privileged few. In Sweden, design is seen as a tool to solve problems in unexpected ways and challenge the status quo to create a better life for everyone.

The Swedish Design Museum has been created by Visit Sweden as part of the organization’s design program. The museum is a virtual museum with a focus on architecture, design and fashion, and it will create new exhibitions continuously together with design experts and curators.

About the first exhibition: "Live from Sweden"

FORM US WITH LOVE // Plug Lamp

Form Us With Love is a Stockholm based international design studio founded in 2005. Since its conception, the studio has burned with a passion for design and its democratic potential: the belief that we all have a right to meaningful design.

Veryday is a Swedish industrial design consultancy based in Stockholm. Founded as Designgruppen in 1969 and developed into Ergonomi Design Gruppen in the early 70’s the company has since its inception focused on user-centric solutions based on genuine user insights to empower, enrich and energize both people and brands. The Thule Glide range was developed by Veryday’s design team in partnership with Thule Group design department, and has been rewarded with the Red Dot award.

Stig Carlsson was a sound pioneer whose work would redefine the world of sound. Carlsson a graduate engineer at the Royal Institute of Technology in Stockholm, where he also taught acoustics, began his ground breaking work in the early 50’s. After two decades of hard work he reached his greatest commercial successes: OD-11, which was re-designed by Teenage Engineering in 2014.

Ingegerd Eva Maria Råman, born 19 July 1943 in Stockholm, is a Swedish pottery and glass designer. She’s one of the most prominent figures in Swedish design and known for her minimalistic aesthetic. Timelessness and simplicity are key words in her work, focusing on utility items around the set table. Råman has collaborated with several companies throughout the years, including IKEA and Orrefors.

HOPE is a Swedish fashion label created in 2001, by designers Ann Ringstrand and Stefan Söderberg. What began as a creative discussion between two friends, passionate about well-made utility wear, is today a fashion label centered on well-made, quality fashion design. Since 2016 Frida Bard is head of design at HOPE and in charge of both Changes and future collections.

Ann-Sofie Back founded her eponymous label in 2001, and launched BACK, her secondary line only four years later in 2005. With the ambition to present revolutionary thinking in fashion, aimed towards intelligent, style conscious women BACK have in the last decade developed into one of Sweden’s most prominent designer brands.

Wingårdh is a Swedish design office, specialized in architecture, urban planning, interior design and landscape planning. Founded by Gert Wingårdh in 1977 the company is today among the five largest architect groups in Sweden with offices in Gothenburg, Stockholm and Malmö.

Thanks to a collaboration between architects Tove Fogelström and Erik Kolman Janouch the summer house of Kaggeboda came to be.

Fogelström at AndrénFogelström is both an architect and a regular lecturer and teacher at the Royal Swedish Institute of Technology Architecture master's degree program.

Kolman Janouch has a Master of Science (arch.) MSA and studied architecture at the Royal Swedish Institute of Technology and the Royal Danish Academy of Fine Arts School of Architecture.