To highlight its gastronomic heritage and sustainable food culture – and inspire tourists to come to Sweden – Sweden has worked together with two leading food experts to preserve ‘The Taste of Swedish Summer’. Swedish food chemist and forager Lena Engelmark Embertsén and innovative star chef Elvira Lindqvist have used both traditional and modern ways to preserve flavors that reflect the current zeitgeist, in which sustainability is playing an increasingly important role. 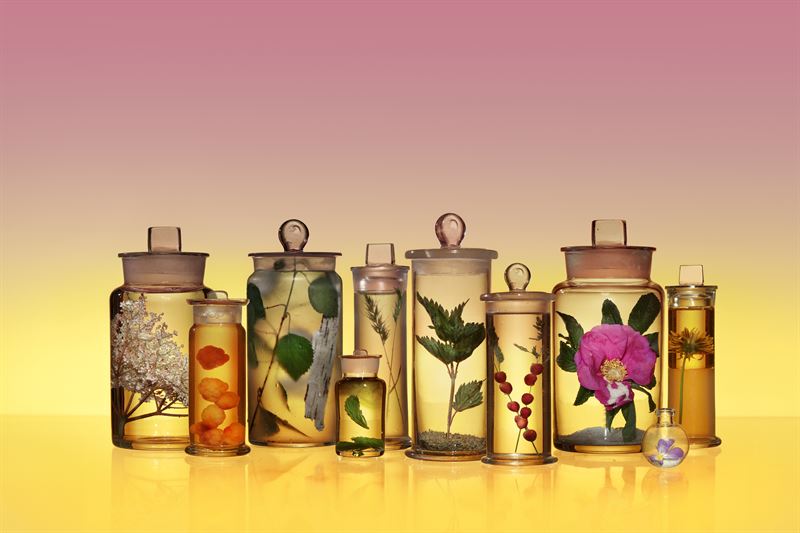 In a normal year, tourists visiting Sweden during the summer months are able to get a taste of its gastronomic treats but due to the pandemic, many visitors have missed out on the Swedish summer delicacies. In June and July, Swedish nature is bursting with flavors that are characteristic for the Swedish summer season. The long days give berries, flowers, and plants precisely what they need in order to develop their distinct taste that is enhanced further through preservation.

”In Sweden, we have always preserved food. In times past it was necessary to survive the winter. Today we can use these techniques in completely new and surprising ways. One way is to preserve the Swedish summer so that more people can get a taste of our unique summer flavors and see how they can be used”, says Lena Engelmark Embertsén.

> See a film about the initiative: visitsweden.com/what-to-do/food-drink/taste-swedish-summer/

Together Lena Engelmark Embertsén and Elvira Lindqvist have created 22 Swedish summer flavors and combinations, some of which can be experienced at Elvira Lindqvist's newly opened Restaurant Oxenstiernan in Stockholm or bought at Lena Engelmark Embertsén’s farm, Högtorp gård in Mellösa. The 22 flavors are also presented on Visit Sweden’s website, where you can learn where the ingredients come from, what they can be combined with, and find out how to create the flavors on your own. “Pickled cloudberries are delicious with venison and moose or barbecued turnip, fermented spruce buds work really well with chicken or cheese and dried nettles are packed with vitamins and can be used as a powder to season smoothies or sprinkled over a salad,” says Elvira Lindqvist.

Elvira Lindqvist and Lena Engelmark Embertsén are not the only ones who have discovered the benefits of working with preservation to experiment with new taste and textures, and to reduce food waste and maximize use of local ingredients. An increasing number of restaurants, shops, and food halls in Sweden – from the family-run Skoogs Eatery and Deli in Funäsdalen in northern Sweden, to the modern food hall Malmö Saluhall in the south – are using these methods. See list below for examples. 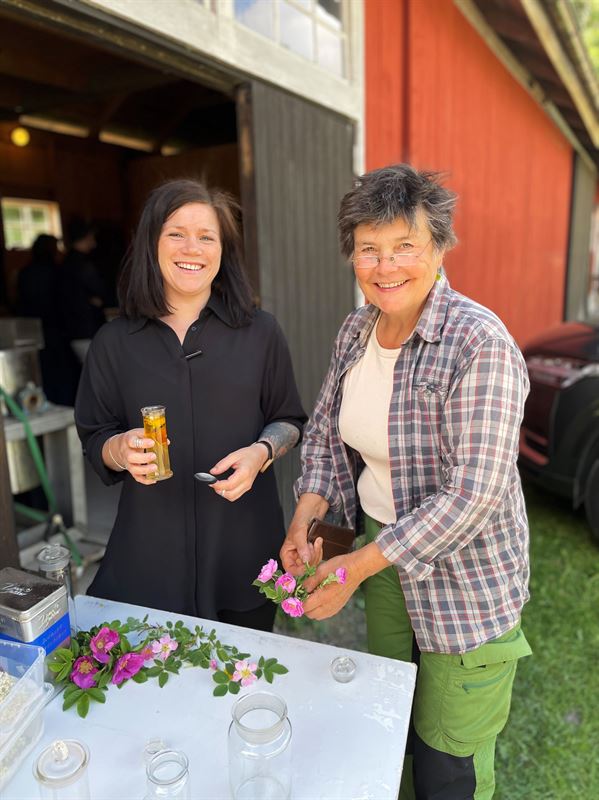 About our Food Innovators
Lena Engelmark Embertsén is a trained food chemist and specializes in finding exciting flavors in nature and combining and preserving these in new ways. She runs Högtorp Gård, a farm dating back to the 17th century, where she creates unique products and places great emphasis on organic production and biodiversity. Lena's products are found in many White Guide and Guide Michelin restaurants and have also been served at the Nobel dinner. Elvira Lindqvist is one of Sweden's most exciting, up-and-coming chefs. She has been named Stella Chef of the Year 2020 at the Stella Gala - a gala that highlights the most prominent women in Sweden’s restaurant industry. She has also worked as a kitchen manager at the acclaimed restaurant at Fotografiska, which has been awarded the Michelin Guide's sustainability emblem and has been named the world's best museum restaurant. Elvira is trained in classic, Scandinavian cuisine and is passionate in her pursuit of sustainability - as well as gender equality - in the industry. In August, she opened Restaurant Oxenstiernan, in central Stockholm, where you can enjoy Swedish, innovative dishes in a beautiful 18th century building.

Lena and Elvira are far from the only ones in their quest to combine traditional food preservation techniques with new recipe ideas. Here are some of the restaurants, shops and food markets that are furthering the art of Swedish cuisine – preserving, refining and experimenting with the creation of sustainable taste sensations throughout the year.

Dr. Mat, Stockholm drmat.se  (Central  Sweden)
Dr. Mat – meaning ‘Dr. Food’ – offers delicious food that is also beneficial to your health and wellbeing. You’ll not only enjoy a selection of delicious dishes with the possibility of buying some unique products to take home, you can also participate in several interesting workshops and lectures about food and health. Visit the downstairs ‘food lab’ where Dr. Mat’s team create drinks and health shots. This is where they also ferment vegetables, producing a healthy bacteria culture that can boost the immune system.

Duo Umeå; visitumea.se/en/dua (Northern Sweden)
A gourmet delicatessen with a focus on quality, inspiring tastes and customer service; you’ll find cheeses and other handcrafted foods, with everything from smoked, air-dried produce to locally crafted, bean-to-bar chocolates with a taste of Norrland, as well coffee from the local Coastas Roastery. Explore the changing seasons’ unique flavors in a selection of vinegars, fermented beverages and in Duo Umeå’s own jams.

Flammans skafferi, Storlien; flamman.nu (Central Sweden)
Visit Flammans Skafferi for glorious food that exudes a love for nature and sustainable agriculture, as well as for artisan foods and growers. The team at Flammans harvest, smoke, air-dry and preserve a selection of raw produce, exquisitely imbued with flavors from the Jämtland mountains, forests and lakes.

Högtorp gård close to Stockholm; hogtorp.se (Central  Sweden)
People have lived and worked at Högtorp gård since the 17th century. Today, the farm is run by Lena Engelmark Embertsén, a food chemist and explorer of tastes. With great respect for nature, Lena is constantly on the lookout for new, innovative flavors which she then refines through various food preserving techniques. Visit Högtorp gård’s shop to buy many of Lena’s original and award-winning food products.

KOKA, Göteborg; restaurangkoka.se/en/restaurant-koka (Southern Sweden)
At Koka, sustainable gastronomy is a passion. It’s where you’ll enjoy the finest food but still keep a clear conscience, as most of the dishes are plant-based, with organic ingredients that are locally sourced as much as possible. Even the wine list is carefully selected, featuring small-scale wine producers that use organic or biodynamic methods. Koka’s light, original fare has garnered them a Michelin star in 2020, and a high ranking in the 360 Eat Guide, which ranks Nordic countries’ restaurants according to sustainability criteria.

Malmö Saluhall; Malmö; malmosaluhall.se/en/ (Southern Sweden)
A food market hall for everyone and every taste. This is where you’ll find it all – from local produce, freshly caught fish, cured delicacies and inspiring street food stands, to freshly baked cardamon buns, chocolate pralines and handcrafted ice cream. Even if you’re not feeling particularly hungry, the Malmö food hall is most definitely worth a visit. Not least for the building, a former warehouse from the 1800s, which has been lovingly restored and redeveloped by one of Sweden’s foremost architects, Gert Wingårdh.

Paul Taylor, Sundbyberg (suburb of Stockholm), paultaylorlanthandel.se (Central Sweden)
A restaurant and farm shop run by two of Sweden’s most famous chefs, Paul Svensson and Tareq Taylor. Sustainability is the common thread throughout – from the seasonal and organic, locally grown produce to the restaurant’s innovative furnishings, made from recycled sea plastic and plant waste. A circular and zero-waste approach is also reflected in the duo’s passion for pickled and preserved produce. Every aspect of the dining experience is considered and thoughtful while still being fun and utterly delicious.

Restaurang Oxenstiernan in Stockholm, oxenstiernan.se (Central Sweden)
Restaurant Oxenstiernan is run by star chef Elvira Lindqvist and silversmith Sebastian Schildt. This is where you’ll enjoy innovative, Swedish cuisine  on a beautiful old farm that dates back to the 18th century. The restaurant has a strong focus on sustainable cuisine, with locally sourced food and beverages, and is also a natural draw for those interested in Swedish design and quality craftsmanship.

Rutabaga, Stockholm, mdghs.se/en/rutabaga/Mathias (Central Sweden)
Modern fine dining with a plant-based twist! Rutabaga combines Swedish, lacto-ovo-vegetarian produce with influences from all over the world, and uses curing methods throughout the year to enhance and offer unique taste experiences. Located in Stockholm’s historic Grand Hotel, Rutabaga has been awarded the Pioneer of the Year Award by the prestigious White Guide. It’s run by restaurateur Mattias Dahlgren, who has, among other accolades, been named Taste Maker of the Year at Sweden’s national Restaurants Awards event.

SAV, Östersund, savhuset.se/en_us (Central Sweden)
A unique, Swedish winery and drinks producer who creates handcrafted beverages with birch sap, harvested from the Storsjön area in Jämtland, northern Sweden. SAV’s name means birch sap in Swedish, and its first wine, Sav Sparkling, is based upon a recipe from 1785. Today, their sparkling wine has been joined by  several other artisan beverages, both with and without alcohol. SAV offers guided tours and tastings.

Skoogs krog, deli och bistro, Funäsdalen skoogskrog.se/krog (Central Sweden)
A family-owned business in the Funäsfjällen mountains, with a restaurant, bistro and delicatessen, as well as lodgings. Skoogs work closely with local producers to source everything from raw ingredients to the restaurant’s crockery, with much of the raw produce coming from Skoogs’ own farms in Funäsdalen.

Swedish Wine Center Vinbar; Malmö; swedishwinecenter.se (Southern Sweden)
As the name suggests, the Swedish Wine Center has its main focus on wine, not least on locally produced Swedish wines, mainly from Skåne. Here, you can enjoy a selection of world-class wines, take part in a wine tasting of select Swedish wines and also enjoy some good, homemade food at the same time. Choose from a selection of larger dishes or smaller bites, all prepared with locally sourced and freshly produced ingredients.

About Visit Sweden's Work Within Food Tourism
Since 2017 the Swedish government and the EU have supported Visit Sweden's "Export Programme for Food Tourism" through the Rural Development Programme. Visit Sweden works together with Sweden's regional tourism organizations, local authorities, and larger cities to strengthen the image of Sweden as a food destination in the long term and to increase the number of culinary travelers.