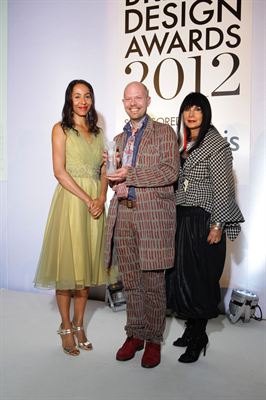 The President of the British Institute of Interior Design (BIID), Sue Timney, has presented one of this year’s six prestigious ELLE Decoration British Design Awards.

Dedicated to promoting and supporting British design, the ELLE Decoration British Design Awards are an important date in the UK’s design calendar. They showcase the strong mix of style and creativity that exists across the country and also recognise the wider cultural contribution and impact of design on the fields of fashion and art.

“It was a great honour for the Institute and for me personally to be invited to present a BDA this year,” says Sue Timney. “These Awards recognise useful, beautiful and original new work by British designers, and, in doing so, celebrate the rich abundance of talent we have in the country.”

First place in the Awards went to Hopkins Architects for the Olympic Velodrome. Second place was awarded to the Olympic torch by Barber Osgerby with the Western concourse at King's Cross Station by John McAslan + Partners in third, Tetra Shed by Innovation Imperative taking fourth, Mark Herald for his Harvest Hare wallpaper in fifth and the Crystal Bulb by Lee Broom awarded sixth place.

Now in their 11th year, the Elle Decoration British Design Awards are held in association with John Lewis and media supporter, the Telegraph magazine. For more information about the awards, visit http://www.thebritishdesignawards.com/.

About the British Institute of Interior Design (BIID)

Established in 1966, the BIID is the professional Institute for interior designers in theUK.

The BIID’s growing national and international membership represents both the commercial and residential sectors, from heritage to cutting edge. In addition to rigorous entry requirements that assess training, experience and professionalism, the Institute requires members to continue their professional development throughout their career, ensuring their continued expertise in design process, practice and regulatory matters.

The BIID is the only professional organisation for interior designers which has been granted the prestigious and rare accolade of Institute status by the Minister of State as the pre-eminent body in its field. The Institute’s mission is to encourage and support creativity and competence in the field of interior design through facilitating best practice, practical professional support, development opportunities and education.

On the national stage, the BIID is a full member of the Construction Industry Council and, as a result, is now part of Government consultations to advise on new policy and legislation. Internationally, the BIID is represented on the board of the International Federation of Interior Architects and Designers; the global voice and authority for professional interior architects and designers. More details at www.biid.org.uk.