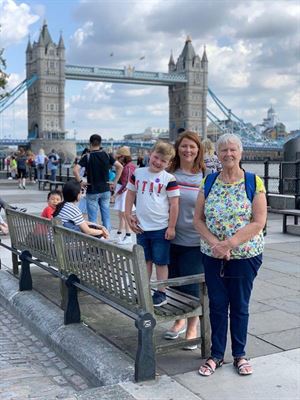 RHONA Bill and mum Pam are inspiring role models - but like millions of women this International Women’s Day they see themselves as just getting on with their lives.

Pam, 72, has been through cervical cancer twice but still has time to provide vital support to her daughter and grandson.

“My mum is a big part of my life,” says Rhona. “She is a very strong woman. She has been through a difficult time recently. But she still runs about after me.

“She is my right hand woman.”

Pam had a life-changing operation two years ago and continues to receive specialist treatment at the Queen Elizabeth Hospital in Gateshead.

In a twist of fate, daughter Rhona, a travel agent for more than 20 years, is now back living in the pub - The Crown at Stanwix in Carlisle - where she lived as a child when mum Pam ran it.

When mum Pam retired through ill health in 1992, and the Bills moved out of the Crown, little did Rhona think she’d be back living there with her own son almost 30 years later.

After leaving school Rhona studied travel and tourism at Carlisle College, and then travel management with business and finance at New College Durham.

It was no surprise as a young woman that her love of travel led her to take time out to see the world, travelling in Australia and New Zealand.

On returning to the UK, she put her studies and travelling to good use, becoming a world travel specialist for Thomas Cook where she worked for 21 years, in Carlisle and Penrith.

But the pub business was in her blood. Throughout Rhona’s childhood she grew up in pubs with Pam running venues in locations as diverse as Lancashire and Majorca, Stornoway and Stirling.

When Drouth Limited managing director Dianne Irving - who runs four pubs and a gin parlour  across Cumbria - came into the pub with husband Iain one night and revealed they were looking for someone to run The Crown, it was too good an opportunity for Rhona to miss.

Rhona packed up her bags, along with her travel career and evening bar work, and moved back into the pub where she had grown up as a teenager, this time as general manager with son Harvey.

Rhona’s mum Pam said: “It’s strange how things work out, and what goes around comes around. For both of us to be in the same circumstances 30 years apart is incredible.

“I am very, very proud of Rhona and what she has achieved. It’s a great pub and she is doing a brilliant job.”

Rhona, who says she also gets invaluable help with family life from Harvey’s godparents, best friends Claire Laidlow and Rachel Waddington, has built up a strong, mostly-female team at The Crown.

She praises assistant manager and mum-of-five girls Angela McVelia and the rest of the team for giving her such vital support in the business.

“I am very lucky that we have a great team at The Crown. Everyone works really hard to make sure we provide our customers with what they want. It really is a community pub with something for everyone and is popular with all ages,” said Rhona.

Rhona is pleased that all the hard work has led to The Crown being shortlisted in two Greene King national awards for Community Pub of the Year and Entertainment Pub of The Year.

Managing director Dianne said “I am delighted The Crown has been nominated for these awards. It’s testament to Rhona and the team who really listen to the customers and make sure we offer something for everyone. Rhona is doing a brilliant job.”

The Crown is already an award-winner, having landed the Best Turnaround Pub of The Year in the Great British Pub Awards in 2018

Dianne, Rhona and The Crown team will find out if they are winners in the latest awards at the Greene King Pub Partners Night of Excellence on March 25, at Whittlebury Hall in Towcester.

To mum Pam, son Harvey, and all family, friends and work colleagues, no matter what the result, one thing is for certain, role model Rhona is already, most definitely, a winner.

Rhona Bill, general manager of The Crown, at Carlisle, where she grew up as a child

Rhona Bill and son Harvey outside The Crown, at Carlisle

*This press release is issued on behalf of Drouth Limited by 32West. For further information including interview opportunities, contact Jonathan Lee on 01229 808306 or 07444 022038 or email jonathan@32west.co.uk 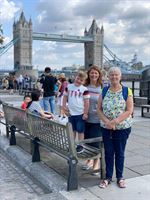