Sitowise Group Plc: Exercise of over-allotment option and discontinuation of the stabilisation period

Sitowise Group Plc            Stock Exchange Release      23 April 2021 at 8:00 p.m. EET NOT FOR RELEASE, PUBLICATION OR DISTRIBUTION, DIRECTLY OR INDIRECTLY, IN OR TO THE UNITED STATES, AUSTRALIA, CANADA, JAPAN, HONG KONG, NEW ZEALAND, SINGAPORE OR SOUTH AFRICA OR ANY OTHER JURISDICTION IN WHICH THE DISTRIBUTION OR RELEASE WOULD BE UNLAWFUL. Sitowise Group Plc: Exercise of over-allotment option and discontinuation of the stabilisation period With reference to the offering circular published by Sitowise Group Plc (“Sitowise”, the “Company”) on 12 March 2021 and the stock exchange

Nyfosa AB (publ) (“Nyfosa” or the “Company”) has successfully issued a new senior unsecured green bond with a volume of SEK 1,000,000,000 within a framework amount of SEK 2,000,000,000 (the “New Bonds”). The New Bonds have a three year tenor and a floating rate interest of 3M STIBOR +3% per annum. Nyfosa intends to list the New Bonds at Nasdaq Stockholm, Sustainable Bond List. The proceeds from the bond issue will be used in accordance with the Company’s newly established Green Finance Framework and to repurchase the Company’s outstanding 2019/2022 Bonds with ISIN SE0012569655 (”the 2019/ 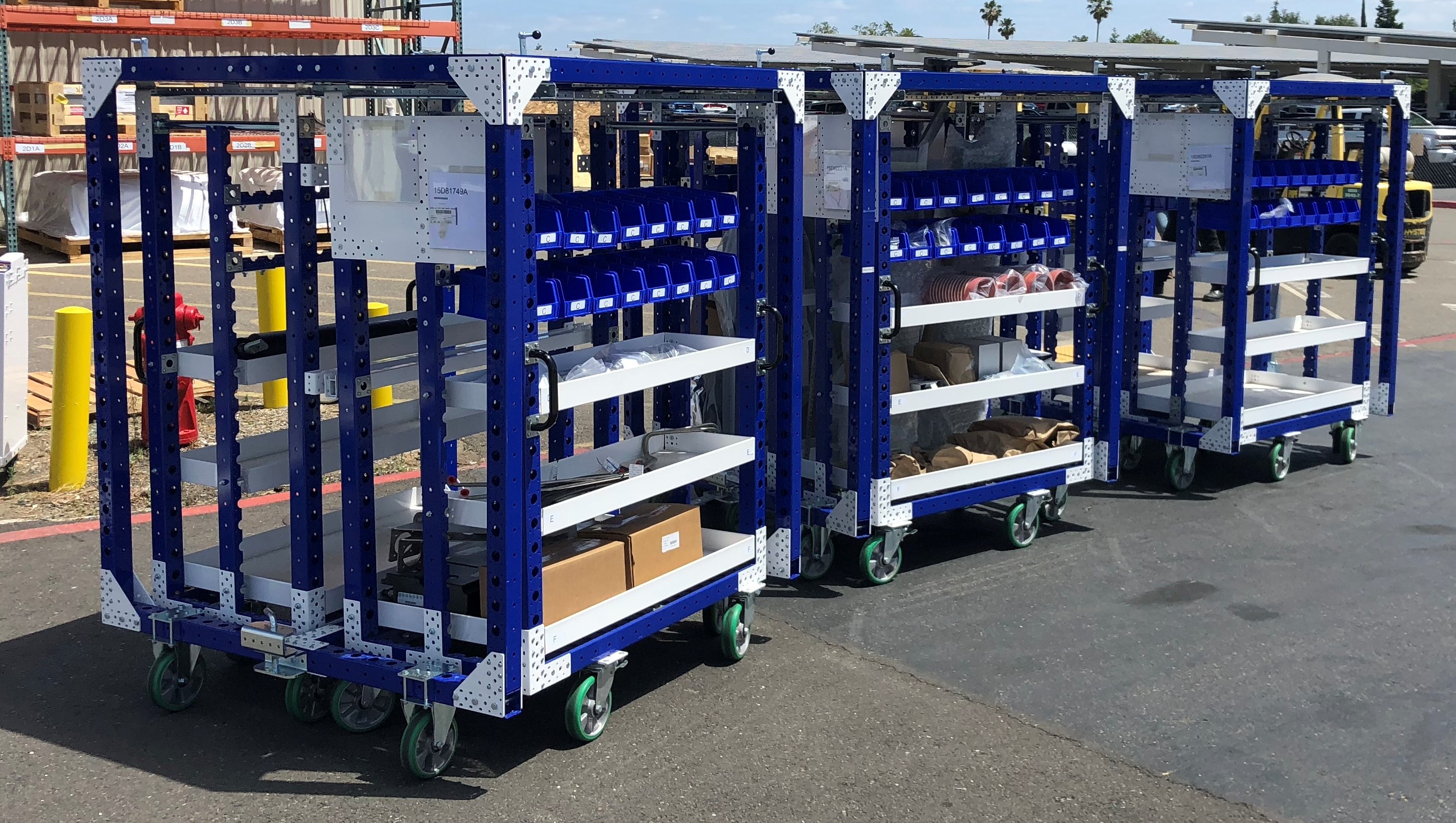 FlexQube announces it has received a $430,000 order for additional material handling carts from Siemens Mobility in the U.S.  Siemens Mobility designs and manufacturers rail vehicles, locomotives, components and systems to more than 30 transit agencies and cities across North America with manufacturing facilities in Sacramento, CA, Pittsburgh, PA, Louisville, KY and Marion, KY. The carts will be delivered during the second quarter of 2021. Siemens Mobility has been a continuing customer of FlexQube since 2017. About FlexQube FlexQube offers a unique and patented concept that is used

Germany continues lock-down until the end of June

NOT FOR RELEASE OR DISTRIBUTION OR PUBLICATION IN WHOLE OR IN PART, DIRECTLY OR INDIRECTLY, IN OR INTO THE UNITED STATES, AUSTRALIA, CANADA OR JAPAN OR ANY JURISDICTION IN WHICH SUCH PUBLICATION OR DISTRIBUTION IS UNLAWFUL This announcement does not constitute an offering circular, prospectus or other offer documents. No one should purchase or subscribe for any securities in TROPHY GAMES Development A/S ("TROPHY GAMES" or the "Company") except on the basis of information in the company description published by the Company in connection with the offering and admission of such securities

Information about various derivatives that will be listed at NGM.For more details, see attached file. For further information concerning this NGM notice please contact NGM Listing department on phone +46 8 566 390 20 or listings@ngm.se. Nordic Growth Market NGM AB About NGMNordic Growth Market NGM AB (NGM) is an authorized stock exchange with operations in Sweden, Norway, Denmark and Finland. The exchange is a wholly-owned subsidiary of Boerse Stuttgart, the leading retail exchange in Germany. NGM offers a complete marketplace for exchange traded products and provides a

NOT FOR RELEASE OR DISTRIBUTION OR PUBLICATION IN WHOLE OR IN PART, DIRECTLY OR INDIRECTLY, IN OR INTO THE UNITED STATES, AUSTRALIA, CANADA OR JAPAN OR ANY JURISDICTION IN WHICH SUCH PUBLICATION OR DISTRIBUTION IS UNLAWFUL This announcement does not constitute an offering circular, prospectus or other offer documents. No one should purchase or subscribe for any securities in TROPHY GAMES Development A/S ("TROPHY GAMES" or the "Company") except on the basis of information in the company description published by the Company in connection with the offering and admission of such securities

DOF Subsea has been awarded a contract by Siemens Gamesa for Skandi Constructor. The vessel will be utilized for projects on several offshore wind farms in Germany with a duration up to 160 days, starting in April.  Contact:CEO Mons Aase,  Tel + 47 91 66 10 12CFO Hilde Drønen, Tel + 47 91 66 10 09

NOT FOR RELEASE, PUBLICATION OR DISTRIBUTION, IN WHOLE OR IN PART, DIRECTLY OR INDIRECTLY, INTO OR WITHIN CANADA, AUSTRALIA, NEW ZEALAND, SOUTH-AFRICA, HONG KONG, JAPAN OR ANY OTHER JURISDICTION IN WHICH THE DISTRIBUTION OR RELEASE WOULD BE UNLAWFUL Oslo, 23 April 2021 - Reference is made to the announcements on 15 April 2021, where it was announced that DNB ASA, through its wholly owned subsidiary DNB Bank ASA ("DNB" or the "Offeror"), had reached an agreement with Sbanken ASA ("Sbanken" or the "Company") to launch a recommended voluntary cash tender offer for 100% of the shares of the

Committees of Metso Outotec’s Board of Directors

Metso Outotec Corporation’s stock exchange release on April 23, 2021, at 4:15 p.m. EESTThe Board of Directors of Metso Outotec Corporation held its organizing meeting after the Annual General Meeting held earlier today. In the organizing meeting, the Board of Directors elected the members of the Audit & Risk Committee (previously Audit Committee) and the Remuneration & HR Committee from among its members. Arja Talma was appointed as Chair of the Audit & Risk Committee and Klaus Cawén, Ian W. Pearce and Emanuela Speranza as its members. Antti Mäkinen was appointed as Chair of the

Aalborg, April 23, 2021. Asetek A/S' board of directors has on April 21 st, 2021 decided to grant options to key employees in the Company and its subsidiaries. The decision is made in accordance with the Company's remuneration policy. A total of 216,300 options have been granted to purchase shares at a price of NOK 100.15 per share. The exercise price is established as the share price ("closing price") for the Company's share on the day of the day of grant and the day after, which was the day of publishing the Q1 2021 report. The options become exercisable gradually within a period of 3

Notice to attend the Annual General Meeting of 2cureX AB

THIS PRESS RELEASE IS AN ENGLISH TRANSLATION OF THE LEGALLY BINDING SWEDISH PRESS RELEASE: “KALLELSE TILL ÅRSSTÄMMA I 2CUREX AB, April 23, 2021”. The shareholders of 2cureX AB, 559128-0077, are hereby invited to the Annual General Meeting on Thursday, May 27, 2021. Considering the risk of spreading the coronavirus and the authorities' regulations/general advice on avoiding gatherings, the Board of Directors have decided that the Annual General Meeting shall be held without a physical presence by shareholders exercising their voting rights by means of only advance voting, so-called postal

Attached is the Annual Report 2020 for Bonheur ASA including the ESG report for 2020. The main subsidiaries of Bonheur have disclosed separate ESG reports on their respective web sites:www.fredolsenrenewables.com www.windcarrier.com www.globalwindservice.com www.fredolsencruises.com

In a speech at the White House Leader’s Summit on Climate on Friday, Vattenfall CEO Anna Borg commits to meet the targets in the Paris agreement:“I commit to make sure that Vattenfall meets the targets in the Paris Agreement: by phasing out fossil emissions from our own operations and by enabling our customers to do the same. Transforming into a sustainable business is not only possible. It is the to have a competitive edge in the future.” Read more and see the full speech here:https://group.vattenfall.com/what-we-do/leaders-summit-on-climate For further information, please contact:

Biesèrt says companies need to stand up and take responsibility

Ulrika Biesèrt, Global People & Culture Manager, Ingka Group, said that the Covid-19 pandemic had stress-tested the company’s culture during an event on Wednesday 21 April that explored how the world is redefining work post-Covid.“Looking back on our most recent year, I think it’s fair to say it was our most challenging, but a successful one,” Biesèrt  said. “And I truly think we were able to achieve this type of performance because we ground our work in our vision and values, striving to take responsibility and take care of people.”  The

Nyfosa increases the transaction cap of its tender offer

Nyfosa AB (publ) (“Nyfosa”) increases the transaction cap of its tender offer (the “Tender Offer”) in respect of its outstanding SEK 1,500,000,000 senior unsecured floating rate bonds 2019/2022 (the “Bonds”) from approximately SEK 500,000,000 to approximately SEK 600,000,000.As previously announced in a press release dated 19 April 2021, Nyfosa AB is offering holders of the Bonds to tender their Bonds for purchase by Nyfosa for cash. In connection with the Tender Offer, Nyfosa has also announced that it contemplates to issue new SEK denominated senior unsecured green bonds under a framework

FELLOW FINANCE PLC PRESS RELEASE 23.4.2021 AT 3:45 PMFellow Finance, the largest crowdfunding and peer-to-peer lending provider in the Nordics, has selected Enfuce, one of Europe’s leading payment companies, as its card issuing provider. The partnership allows Fellow Finance to expand into card payments through a tailored Card as a Service offering. Fellow Finance was founded in 2013 to meet soaring demand for smarter lending services. Through its automated platform, present in six different geographical markets, the company has facilitated over €700 million euros in crowdfunded loans

Faron Pharmaceuticals Oy   (“Faron” or the “Company”) Board Change Company announcement, 23 April 2021 at 15:45 EET TURKU, FINLAND - Faron Pharmaceuticals Oy (AIM: FARN, First North: FARON), the clinical stage biopharmaceutical company, is pleased to announce the appointment of Anne Whitaker as a Non-Executive Director of the Company following the passing of all resolutions put to shareholders of the Company at the AGM held earlier today.  Anne has more than 25 years of experience in the life science industry, including senior leadership roles with large pharmaceutical,

Faron Pharmaceuticals Oy (“Faron” or the “Company”) Results of the Annual General Meeting and Decisions of the Board of Directors Company announcement, 23 April 2021 at 15:45 p.m. (EEST) TURKU, FINLAND – The annual general meeting (“AGM”) of Faron Pharmaceuticals Oy (AIM: FARN, First North: FARON) took place at the premises of Inderes Oy in Helsinki, Finland today, 23 April 2021. The AGM approved all the proposals of the board of directors (“Board”) and its committees, set out in the notice of the AGM published on 25 March 2021. The AGM was held through exceptional procedures

The shareholders of Scout Gaming Group AB (publ), reg.no. 559119-1316 (the ”Company”), are hereby given notice to attend the Annual General Meeting on Tuesday 25 May 2021. In order to counteract the spreading of the corona virus, the board of directors of the Company has decided, in accordance with Sections 20 and 22 of the Act (2020:198) on temporary exceptions to facilitate the execution of general meetings in companies and other associations (Sw. lagen (2020:198) om tillfälliga undantag för att underlätta genomförandet av bolags- och föreningsstämmor), that the annual general meeting shall

Rotor sail technology has been tested at Viking Line since 2018.The innovative rotor sail technology developed by the Finland-based clean tech company Norsepower has been tested at Viking Line for three years. The rotor sail generates thrust   utilizing the so-called Magnus effect, thus reducing the vessel’s need for propulsion force. M/S Viking Grace was the world’s first passenger ship to be equipped with a rotor sail. In April, the trial testing of the rotor sail on Viking Grace was completed. Viking Line wants to continue testing new climate-smart solutions on its vessels. The new