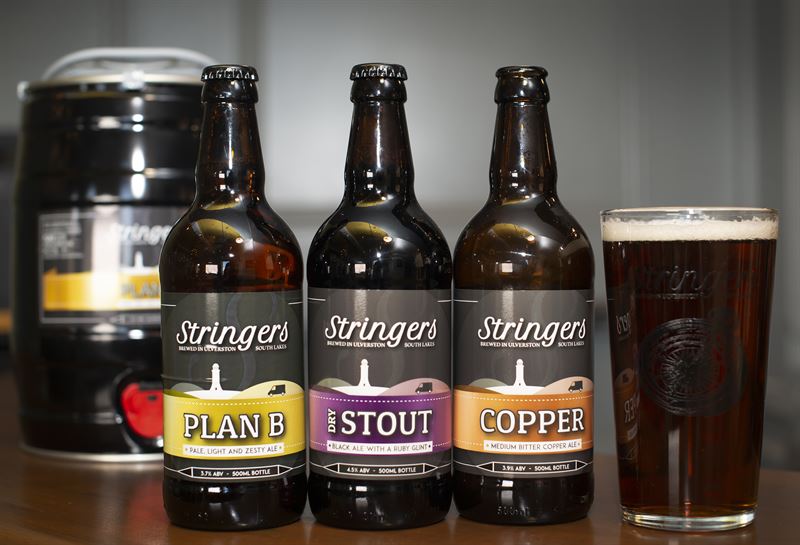 A MICRO brewery which has won plaudits for its increasingly popular range of brews is set to launch an ale to go range.

Bosses from Cumbria-based Stringers say the move is in response to feedback from customers who yearn for a takeaway treat.

Now they are set to launch bottled beers and mini kegs after striking a deal with Cockermouth-based firm, Bottled in Cumbria.

The move will also be marked with the introduction of a new stout.

Kirsty Mackenzie is the managing director of family business, Lakeland Inns, which owns the brewery.

She said: “Since Lakeland bought Stringers just over a year ago, we have invested huge sums in the brewhouse and in marketing the fantastic range of ales created by head brewer Jon Kyme and his team.

“We are now at a point where we are able to keep up with growing demand for our cask products, so we are looking at ways in which we can make our beers more accessible than ever.

“There has been plenty of feedback from our customers about what we should do next, and by far the most frequent of requests has been to make our beers available in bottles and also in mini casks.

“So we will be doing just that. Our beers will be available to buy in bottles over the bar at all Lakeland Inns pubs and also at pubs and retail outlets across the North West and beyond which decide to stock them.

“We will also be selling gift packs and mini kegs in all each of Lakeland Inns four pubs and at local festivals.”

Stringers, which is based in the south Cumbrian town of Ulverston, was purchased by Lakeland Inns last year.

After a £50,000 investment, the business is now brewing more than 4,000 pints a week and supplying 12 different ales to pubs and bars across the north-west.

It is based out of a unit on the Low Mill Business Park in Ulverston and brews a variety of beers including the enduringly popular Furness Gold, a 5.5% IPA and Stringers Blonde.

Plan B will be the only ale available in mini keg format.

The bottled beers will be Plan B, Copper and a new offering called Dry Stout.

Kirsty said: “We specifically chose Bottled in Cumbria as our partner for this project because we are keen to keep our carbon footprint as low as possible.

“Stringers is powered by 100 per cent renewable energy, as the impact we have on the environment is very important to us.

“Our new bottled and min keg products are an exciting step for us - and we can’t wait to see them in pubs and shops across the UK.”

Lakeland Inns is a family business which is run by husband and wife team, Scott and Kirsty MacKenzie.

The company operates three pubs across the south Lakeland area; The Sun in Ulverston; The Commodore in Grange and The Black Cock in Broughton-in-Furness.

Lakeland Inns creates its own beers and ales from its 100% renewably powered brewhouse in Ulverston. The beers are sold in all

Lakeland Inns pubs under the Stringers Brewery brand, and are also available at pubs across the north west.

The Sun Inn is the proud holder of a Cumbria in Bloom gold award.