Elephants to Ants - how multi award-winning company is taking an innovative approach to making engineering solutions safer, faster and cheaper 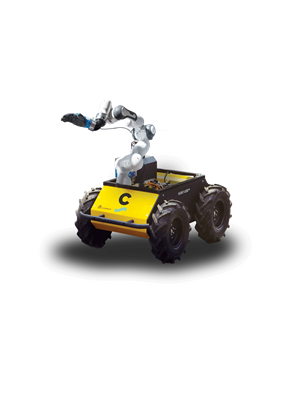 A MULTI award-winning company has taken its cue from nature to develop an innovative transferable robot system which could hold the key to future engineering solutions around the world.

UK company Createc collaborated with a range of businesses to develop its engineering solution as part of an £8.5m industry competition.

Now Createc, holder of two Queen’s Awards for Innovation and International Trade, is further developing its innovation with the aim of deploying it across a range of industries around the world, including nuclear, oil and gas, construction and engineering.

The Integrated Innovation in Nuclear Decommissioning (IIND) competition was aimed at bringing more innovation to decommissioning, and involved applicants being asked to find innovative solutions to a specific challenge at the Sellafield site in Cumbria.

But such has been the learning, particularly from the collaborative nature of the competition, that Createc managing director Matt Mellor’s vision is to apply the same technology and approach to provide solutions to a range of industries around the world.

Matt said: “It has been a really unique opportunity. It has certainly changed what we can do and the way we think about things.”

Createc, based in Cockermouth in Cumbria, collaborated with a range of partners: RACE, REACT Engineering, RED Engineering, StructureVision, OC Robotics and Italian firm IIT, to develop its “Elephants to Ants” solution.

Instead of building one giant ‘elephant-like’ robot which might be good at tackling a single task, Createc took a totally different and innovative approach.

It built a network to support a diverse range of smaller robots, or ‘ants’, which work together effectively to provide an extremely versatile, robust and resilient group of robots capable of adapting quickly to changing conditions and different challenges.

The way Createc has developed its toolkit means different technologies are brought together in an easy-to-use way, using off-the-shelf products as much as possible.

“It’s a LEGO kind of approach,” said Matt. “It means that when we do do engineering to try to resolve one problem it can then be re-used for a range of situations.”

Createc also wanted users with no robotics or programming knowledge to be able to safely and effectively reconfigure a robotic system without needing to write any code.

“We wanted to make sure it is very usable with either no training required, or very minimal training,” said Matt.

Many companies will spend a huge amount of time on detailed planning of every step of a process - only to find out that planning does not survive first contact as when the robot is deployed in a certain area it finds a different set of circumstances.

Technology allowing safe contact with objects leads to a more agile approach. It means, instead of concentrating planning on avoiding contact, energies and expertise can instead be focused on the engineering, or decommissioning challenge, itself.

“It means you can completely ditch the need for path planning. Instead you can use real-time, hands-on technology in a safe and controlled manner.

The result is that Createc developed Iris, a scalable ‘tool-kit’ of off-the-shelf robotic software modules that can be easily reconfigured to solve the many hazardous challenges which at the moment are tackled by people.

Matt said: “It’s plug and play capability. Iris enables users to focus on tasks to accomplish, not on understanding the tools to do them.”

Iris modules are not aligned to a specific communication system, enabling modules to easily adapt to the varying IT and security requirements of different sites and regulators around the world, and without re-engineering the structure or function of the system.

The benefit of this flexible, agile approach is that it will speed-up engineering or decommissioning solutions, allowing those involved to adapt as challenges arise.

Matt said: “This will accelerate decommissioning and maximize re-use of technology across projects, sites and countries.”

The use of robotic 'soft hands', developed by IIT, that mimic human hands were also seen to be better than conventional robot grippers by the team, as they allow operators to work in a more natural, intuitive way.

This approach is further enhanced through Createc’s development of Iris VR.

Matt said: “As soon as you start cutting, your environment changes, so 3D real-time imaging is an essential component of some engineering and decommissioning operations.

“Where you have awkward views with collision points, Iris VR can actually give you advantages over what a human would see. It allows you to work safely, on the fly in a rigorous environment.”

Createc’s innovative approach means it can react quickly to develop solutions for any challenges it faces - which was proved in how it performed in the competition.

“In the characterisation phase of the competition, for example, when it came to developing a robot to scan the room and install sensors it was built in two weeks by an intern who had only joined us three or four days before,” said Matt.

“This agile approach makes everything so much faster. You have the ability to rapidly configure a solution. Even if it looks crazy, if it works, that is the solution you want.”

Freedom to collaborate with others for the competition also helped Createc take on vital learnings, and develop ‘nuggets’ of reusable technology.

It also resulted in innovative solutions which would accelerate engineering or decommissioning projects, while at the same time reducing costs.

Matt said: “The collaboration with IIT brings some phenomenal new capabilities to future business at Createc that we’d never have found if we hadn't embarked on this project; it’s a great example of the unexpected benefits that can come from collaboration.”

The IIND challenge was funded by the Nuclear Decommissioning Authority, the government department for Business, Energy and Industrial Strategy, and Innovate UK.

Successful entries needed to prove collaboration, and demonstrate an integrated, end-to-end solution that was scaleable and transferable.

They also needed to demonstrate that their solution offered a step change in being safer - minimising human intervention; faster - showing a significant increase in productivity; and cheaper - optimising waste treatment, packing and routing.

Createc, which has won awards for innovation from The Institution for Engineering and Technology (IET), The International Atomic Energy Agency (IAEA) and Nuclear Decommissioning Authority (NDA), successfully demonstrated its Elephants to Ants innovation as part of the competition.

Createc's "Elephants to Ants" approach allows it to rapidly develop bespoke robots by bringing together a range of different off-the-shelf modules. An example of this agile approach is this mobile elevating work platform fitted with cobots (collaborative robots) and "soft hands" technology to give amazing flexibility and human-like control.  Operated remotely it's capable of carrying out a range of complex tasks in extreme hazardous environments. As well as avoiding the need to put humans into these challenging environments this approach also saves time and money in completing a project.

A mock-up test cell at the UKAEA RACE facility at Culham in Oxfordshire shows how Createc's "Elephants to Ants" technology is used to identify radiation levels through 3D imaging. Tested in a nuclear environment, the technology can also be applied to a range of industries including oil and gas, construction and engineering.

A virtual reality view of Createc's "Elephants to Ants" technology with a menu system for selecting different tools, and different camera angles, to enable complex tasks to be carried out remotely in an environment such as collecting data on radiation levels in a contaminated area in a nuclear facility. Createc's technology can be deployed in a range of other industries.

Createc creates technologies which solve some of the world’s most challenging problems.

The team at Createc is motivated by, and focused on, using their scientific and engineering skills to have a positive impact on society, both locally and globally.

They are behind some of the world’s most advanced technologies in robotics and computer imaging.

Based in Cockermouth in Cumbria, with an office in Oxford, Createc works in the civil nuclear, oil and gas, construction, engineering, medical, aerospace, rail, defence and security sectors.

Createc is widely recognised in the nuclear industry for its success in innovation and problem solving. It has pioneered some of the latest technology which is being deployed around the world to provide accurate, and readily-available, radiological information as well as demonstrating its credibility for developing and implementing many game-changing products such as N-Visage® which has been commercially deployed at Sellafield, and extensively at the Fukushima Daiichi site in Japan.

The Createc team is a diverse mix of technical experts from fields such as Computer Vision, Robotics, Nuclear Measurement and Optics, with an agile engineering team that can efficiently build prototype systems and develop them into full products.

Createc is also committed to the development of a robust, high-value-added, 'post Sellafield' supply chain in Cumbria.

Each summer the Createc internship programme welcomes up to four students into the company to work as graduates, paid a graduate salary. Createc has funded four PhDs to date, and Createc staff have authored, or co- authored, a significant number of academic papers which have stimulated further research.

Createc’s achievements have been recognised by two Queen’s Awards for Innovation and International Trade.

Matt Mellor is available for interview.