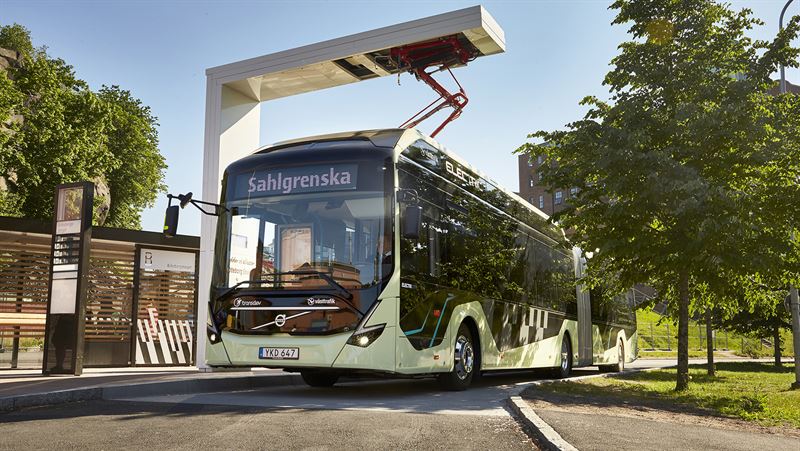 When Gothenburg, Sweden, welcomes the Volvo Ocean Race on June 14–21, the city will also welcome two concept all-electric articulated Volvo buses which will carry visitors between downtown Nordstan and the event venue in Frihamnen. From June 25 the new buses, which can carry 135 passengers, will be tested on part of public transport provider Västtrafik’s route 16. The electric articulated buses are part of the ElectriCity project which since 2015 has seen about ten electric buses operate on route 55 in Gothenburg.

“With these two first all-electric articulated buses, we are taking yet another important step towards quieter and emission-free public transport in Gothenburg and western Sweden. We hope as many locals and visitors as possible will take the opportunity to experience the next generation of bus travel,” says Ulrika Frick, (Green Party), Chair of the Västra Götaland Regional Council’s public transport committee.

In addition to electric propulsion, the two articulated buses feature a number of technical and design solutions that make travel easier and more comfortable for passengers. For instance, the buses have four double doors, large unobstructed floor surfaces and ergonomically designed handrails, grab-handles and backrests for standing passengers. The aim is that a large number of passengers should be able to quickly and conveniently enter and exit at every stop, while making the journey itself as comfortable as possible.

On board there is free Wi-Fi, sockets for charging mobile phones, and screens showing traffic information.

The new electric articulated buses are part of ElectriCity, a joint project between the research community, industry and the city of Gothenburg, where new solutions for next-generation sustainable urban traffic are being developed, demonstrated and evaluated. The articulated bus project is being run by Volvo, Västtrafik, the City of Gothenburg, Göteborg Energi and Transdev.

For more information about the ElectriCity project see electricitygoteborg.se