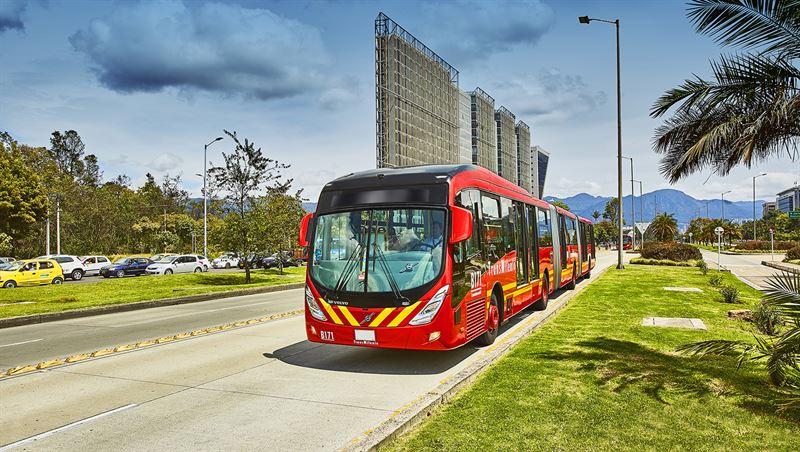 Volvo Buses has in a public tender with Fanalca/Transdev and Somos K been awarded 700 city buses to Bogotá in Colombia. The buses will operate in Transmilenio, Bogotá’s BRT (Bus Rapid Transit) system. The new orders are the largest in ten years for Volvo Buses in Latin America and confirm Volvo’s leading position in the BRT segment.

The orders for 700 Volvo buses are part of a public tender in Bogotá whereby 1,441 buses are purchased for the city’s BRT system, Transmilenio. Volvo is in partnership with operators Fanalca/Transdev and Somos K, which were awarded operational lots in the tender.

The 700 buses are Volvo B340M chassis models, 298 articulated and 402 bi-articulated units, powered by a 12-litre engine and with 160 and 250 passenger capacity, respectively. The chassis will be bodied by Superpolo in Colombia and deliveries will start in March 2019.

Bogotá is replacing its Euro II and Euro III buses with new vehicles that meet the far stricter Euro V emission standards. Along with the changeover, the Colombian capital city is also expanding the capacity of its BRT system by about 30% through the introduction of more bi-articulated buses.

“We are very proud and delighted to once again have the privilege of delivering a large number of city buses to Bogotá, thus contributing to an improvement in the city’s air quality. Our solution, featuring high-capacity Euro V buses extended with Particle Filters, reduces local emissions by a massive 96% compared with the current Euro II buses,” says Håkan Agnevall, President Volvo Buses. “The BRT Euro V offering with filters represents a well-proven solution that meets the demand of true sustainability from all aspects – environmentally, socially and financially.”

Articulated and bi-articulated buses operating in BRT systems such as Transmilenio is a well-proven solution for improving the efficiency and sustainability of public transport in metropolitan areas. They speed up passenger movement, reduce emissions per passenger transported and cut operating costs.

Since 2001 Volvo has delivered more than 2,300 city buses to the BRT system of Bogotá. The fleet includes almost 360 of the company’s hybrid buses making this the largest fleet of electromobility buses in South America.

Volvo is a pioneer in the development of buses for BRT systems and is regarded as the market leader in Latin America. With this most recent order, the company has delivered more than 5,000 buses to BRT systems in Curitiba (Brazil), Bogotá (Colombia), Guatemala City (Guatemala), Mexico City (Mexico), Santiago de Chile (Chile) and San Salvador (El Salvador).

The contracts awarded will be signed by Transmilenio and the operators November 16.