Hannover, Germany, April 1, 2019 - Federal Chancellor Angela Merkel and the Swedish Prime Minister Stefan Löfven were given a glimpse into the factory of the future by ABB CEO Ulrich Spiesshofer 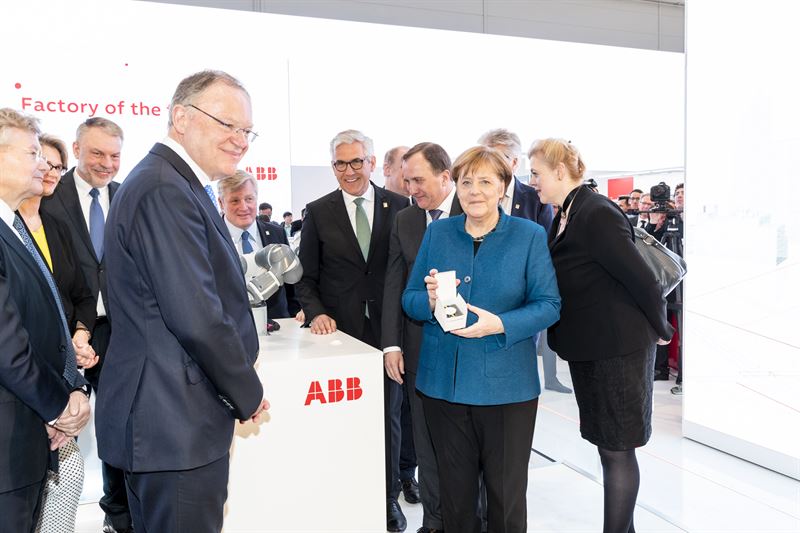 ABB CEO Ulrich Spiesshofer explained how a production cell would work in the factory of the future, where robots will collaborate with humans. They were shown how iconic, two-armed YuMi® robots together with single-armed YuMi® put together wristwatches individually with unparalleled precision, using the revolutionary versatile transport system from ABB’s newly formed Robotics & Discrete Automation business. Federal Chancellor Merkel and Swedish Prime Minister Löfven showed high interest in the factory of the future.

“The future of production will be smarter, more flexible and closer to the customer,” said ABB CEO Ulrich Spiesshofer. “We bring together electrification, automation, robotics and digitalization to create solutions for tomorrow. Even today, ABB is uniquely combining human and machine with its robotic and automation solutions to open up new opportunities.”

At this year’s Hannover Messe, ABB is showing how increasingly smart digital technologies are coming together to transform the way we power, produce, work, live and move. As the official Hannover Messe partner country of 2019, Sweden is the focus of the world’s most important industrial fair, and ABB - established in 1988 from the merger of Sweden’s ASEA and Switzerland’s BBC - also looks with pride on its Swedish heritage.

ABB (ABBN: SIX Swiss Ex) is a pioneering technology leader with a comprehensive offering for digital industries. With a history of innovation spanning more than 130 years, ABB is today a leader in digital industries with four customer-focused, globally leading businesses: Electrification, Industrial Automation, Motion, and Robotics & Discrete Automation, supported by its common ABB Ability™ digital platform. ABB’s market‑leading Power Grids business will be divested to Hitachi in 2020. ABB operates in more than 100 countries with about 147,000 employees. www.abb.com