Dr. Jef Beerten from KU Leuven, Belgium, receives a US$ 300,000 grant over the next three years for ongoing research at the forefront of energy technology.

Dr. Jef Beerten, of the University of Leuven (KU Leuven) and EnergyVille, postdoctoral fellow of Research Foundation – Flanders (FWO), Belgium, is the first recipient of the ABB Research Award in Honor of Hubertus von Gruenberg. At a ceremony in front of more than a hundred international researchers, Dr. Beerten was recognized for his doctoral thesis, “Modeling and Control of DC Grids.” He was chosen from 69 applicants from leading institutions around the world, representing a wide range of disciplines. Dedicated in honor of former ABB chairman Dr. Hubertus von Gruenberg, the award recognizes outstanding academic work in energy and automation and is accompanied by one of the highest research grants of its kind. It will be given every three years.

“As the pioneering technology leader and global digital champion, we’re happy to support path-breaking research connected to the Energy and Fourth Industrial Revolutions,” said ABB CEO Ulrich Spiesshofer. “I congratulate Jef Beerten, whose work stands out for its applicability to real-world problems in the field of power and automation.” 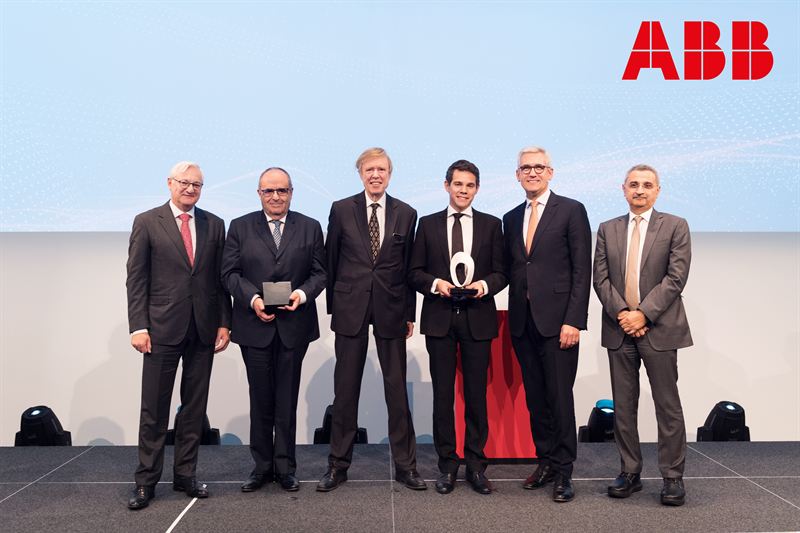 Jef Beerten earned his PhD degree in 2013 with congratulations of the Board of Examiners (highest honors at KU Leuven). He has been in the research group of Prof. Dr. Ronnie Belmans — his PhD adviser — for eight years as one of its core members.

On being the award’s recipient, Dr. Beerten said, “I am proud and delighted to be able to accept this exceptional award. I would like to thank ABB for the grant and this unique opportunity to continue my work in the field of electric power systems. This new research challenges previous approaches to modeling, controlling, and operating electrical grids. It reminds us that we have to embrace these changes by challenging existing paradigms and thinking outside of the box.”

With this research award, ABB is offering the next generation of researchers the necessary support to pursue their ideas and visions while working to develop and present innovative results to the international scientific and business communities.

ABB (ABBN: SIX Swiss Ex) is a pioneering technology leader in electrification products, robotics and motion, industrial automation and power grids serving customers in utilities, industry and transport & infrastructure globally. For more than four decades, ABB is writing the future of industrial digitalization. With more than 70 million devices connected through its installed base of more than 70,000 control systems across all customer segments, ABB is ideally positioned to benefit from the Energy and Fourth Industrial Revolution. With a heritage of more than 130 years, ABB operates in more than 100 countries with about 135,000 employees. www.abb.com

ABB (ABBN: SIX Swiss Ex) is a leading global technology company that energizes the transformation of society and industry to achieve a more productive, sustainable future. By connecting software to its electrification, robotics, automation and motion portfolio, ABB pushes the boundaries of technology to drive performance to new levels. With a history of excellence stretching back more than 130 years, ABB’s success is driven by about 110,000 talented employees in over 100 countries.