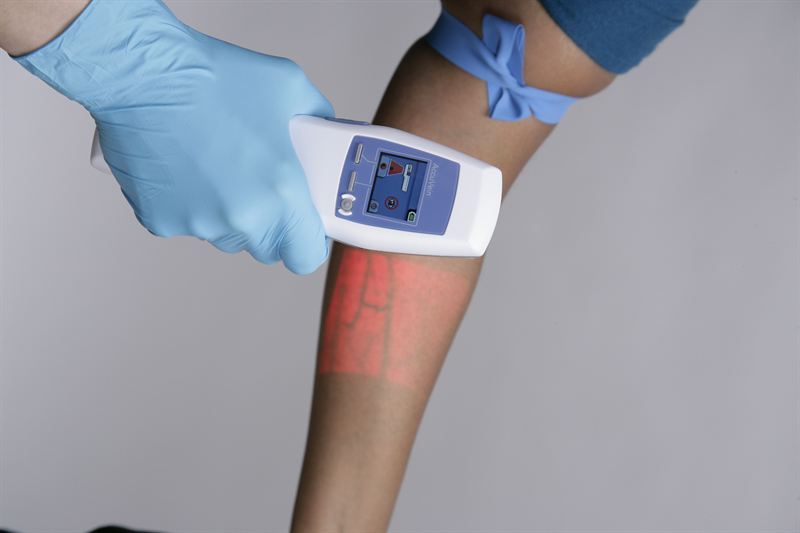 Long Island, NY – May 24, 2013 – AccuVein Inc., the global leader in vein illumination, has been named a winner of the prestigious Red Herring 2013 Top 100 North America Award. As a winner AccuVein joins a short list that honors the year's most promising private technology. Starting from a field of over 1,000 candidates, AccuVein was selected as a Top 100 winner by Red Herring.

Award winners were selected using a rigorous three-step evaluation process that included criteria-based scoring of the candidate's submission, one-on-one interviews and a due-diligence follow up. Through this process Red Herring recognized the significant problem that AccuVein’s laser-based technology solves and they were appreciative of the improvement AccuVein is making to patient care around the world.

Venipuncture for IV starts and blood draw is the most common invasive medical procedure, with 2.7 million procedures conducted every day in the United States alone. Studies show that up to one third of these attempts to access a vein fail the first time, creating unnecessary patient discomfort, as well as additional costs. By showing a map of the patient’s vasculature on the skin’s surface, AccuVein vein illumination has been shown to reduce the need for multiple needle sticks, thereby improving patient care and the time to access veins.

Other procedures benefit from vein illumination as well. In sclerotherapy procedures the AccuVein AV400 helps with vein identification and shows in real time the sclerosant traveling through the vein, confirming the procedure’s efficacy in eliminating the vein. Vein avoidance in surgery and cosmetic procedures is also an important application of the device.

“Selecting startups that show the most potential for disruption and growth is never easy,” said Alex Vieux, publisher and CEO of Red Herring. “We looked at hundreds and hundreds of candidates from all across the continent, and after much thought and debate, narrowed the list down to the Top 100 Winners. Each year, the competition gets tougher but we believe AccuVein demonstrates the vision, drive, and innovation that define a Red Herring winner.”

“We are proud of our team, grateful to our investors, and honored to have been selected for this highly coveted distinction,” said AccuVein CEO Ron Goldman, “This independent, unbiased selection of AccuVein further validates the decision of thousands of customers worldwide to adopt AccuVein vein illumination to help improve patient care.”

About AccuVein Inc. AccuVein Inc. is a leader in medical imaging. AccuVein is the world’s only hand-held, non-contact vein illumination solution. It allows healthcare professionals to see a map of peripheral veins on the skin’s surface with the goal of accessing or avoiding veins. It is built on AccuVein’s proprietary technology as embodied in its growing patent portfolio that covers a broad range of imaging and medical diagnostic technologies. AccuVein devices are in use at more than 2,000 hospitals and available for sale in 100 countries worldwide. To see a demonstration of AccuVein vein illumination, please visit http://www.accuvein.com.