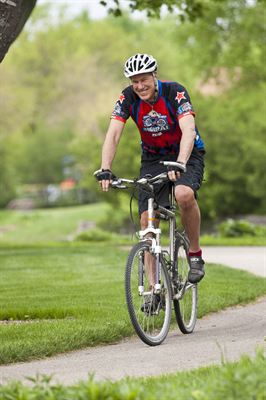 Libertyville, Ill., resident Bill Butrym has two “new” knees, and his sights on riding 2,000 miles by the end of the year.

At 6 feet 10 inches, Bill Butrym is an imposing figure. He played basketball at Creighton University, in Omaha, Neb., but these days he’s not crashing the boards. The 56-year old Libertyville, Ill., resident puts approximately 2,000 miles on his bicycle—and his knees—each year.

“I knew that eventually my knees might become an issue,” Butrym says. “I’ve always been active, even after playing college ball. I just wore them out.”

Cycling is a low-impact exercise that’s easier on your knees than running, but over time, even cyclists can wear out their joints due to the repetitive motion. The 55-year-old Butrym had ridden 1,500 to 2,000 miles per year for many years, including RAGBRAI—a seven-day ride across the state of Iowa.

“I knew it was time,” Butrym says. “It got to the point where everything became more difficult because of my knees.”

Butrym is in good company. Over the last 10 years, knee replacement surgeries have doubled, and nearly tripled in those between the ages of 45 to 64, according to the Agency for Healthcare Research and Quality. Surgery for Butrym seemed to be the next step.

Luckily, one of his cycling buddies—Tom Baier—also happens to be an orthopedic surgeon at Advocate Condell Medical Center in Libertyville, Ill.

“I recommend to patients that they consider knee replacement surgery after we have exhausted more conservative treatment, such as cortisone shots and physical therapy,” Dr. Baier says. “In Bill’s case, he’d extended the life of his knees as best he could—especially having been a college athlete and so active thereafter.”

During a knee replacement procedure, a surgeon removes damaged cartilage and bone from the surface of the patient’s knee joint and replaces them with an artificial surface of metal and plastic.

“In Bill’s case, he was healthy enough to have both of his knees replaced at once,” says Dr. Baier.

Still, his height presented some challenges. “We had to use the biggest implants we had to fit his knees,” says Dr. Baier. “But part of his rehabilitation would be stationary bike riding, so I knew he’d be up to the challenge.”

The surgery last November took five hours, and then Butrym went to a short-term rehabilitation facility nearby.

“I just was happy to get all of this done so close to home. It was so much more convenient than having to go downtown,” Butrym says. “I knew my knees were in great hands at Advocate Condell.”

In a matter of weeks, Butrym felt stronger.

“I was on the stationary bike in my basement after four or five weeks,” he says. “I went for my first outdoor ride in March, and it was like I was never off the trail.”

His goal for this year is to ride 2,000 miles, and since his surgery, Butrym has logged 800 miles and counting.

Advocate Condell Medical Center is the leading provider of comprehensive medical and surgical services in Lake County, with state-of-the-art heart, oncology, neurosurgical, maternity and emergency services. Condell's emergency department is the only Level 1 Trauma Center in Lake County, Illinois. It also features the only dedicated pediatric emergency department in the county. Condell holds accreditation from the Society of Chest Pain Centers for cardiac patients, and is accredited by the Joint Commission as a Primary Stroke Center. Advocate Condell is recognized by U.S. News & World Report as one of the best hospitals in the Chicago metro area for superior results in patient safety and health outcomes.