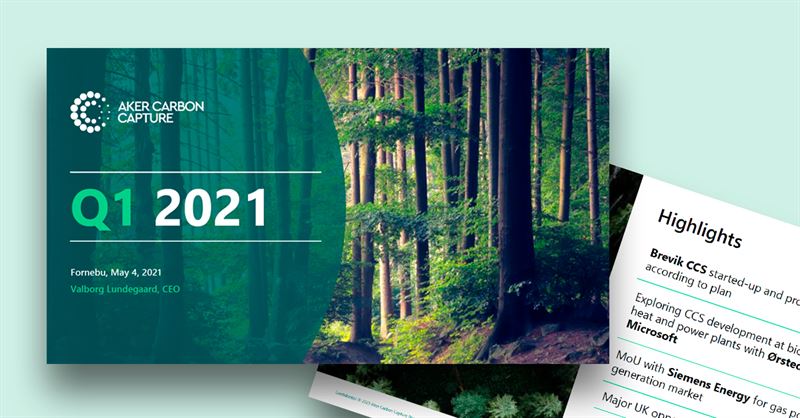 The Brevik CCS EPC project commenced in January in which Aker Carbon Capture will deliver the world’s first carbon capture plant at a cement facility to Norcem HeidelbergCement in Brevik, Norway.

During the first quarter, Aker Carbon Capture also secured a series of strategically important collaboration agreements and partnerships, including a Memorandum of Understanding (MoU) with Ørsted and Microsoft to explore ways to support the development of carbon capture and storage at biomass-fired heat and power plants in Denmark.

Other notable agreements included an MoU with Forus Energigjenvinning and Lyse to explore ways to support the development of a full-scale carbon capture and storage facility in the Stavanger/Sandnes region in southwestern Norway, and a feasibility study for Elkem ASA for the establishment of carbon capture at its Norwegian smelters to support the company’s long-term goal of achieving carbon-neutral metal production.

Today, sister company Aker Clean Hydrogen, Aker Carbon Capture and the municipality of Aukra announced they were exploring opportunities to realize a blue hydrogen production facility on the island in western Norway. The Aukra Hydrogen Hub project will rely on access to natural gas from the local gas processing plant. As part of the development, Aker Carbon Capture will together with the SINTEF research institute explore new capture technology for hydrogen production units which complements the company’s existing and qualified capture technology for blue hydrogen.

In the first quarter, Aker Carbon Capture and Siemens Energy signed an MoU aimed at developing combined offerings for carbon capture solutions that can be applied to gas turbines and gas-fired power plants.

Separately today, Aker Carbon Capture announced a collaboration agreement with SINTEF, one of Europe’s largest independent research organisations. The two organisations have collaborated on CCS development for more than a decade including on developing the CCS industry’s most HSE-friendly amine solution.

Revenue for the quarter was NOK 63 million and EBITDA (Earnings before interest, tax, depreciation and amortisation) was negative NOK 23 million. The cash balance at the end of the quarter was NOK 484 million.
Market fundamentals, reflected in recent record high prices for ETS quota prices and major opportunities moving forward, remain supportive of further growth.

Aker Carbon Capture aims to take a leading position in the global CCS industry, and the company last year launched a long-term goal of ‘10 by 25’, which states that the company will have secured firm contracts for carbon capture plants for a total of 10 million tonnes per year by the end of 2025.

Aker Carbon Capture will present the results in a live webcast, followed by a Q&A session, today at CET 0930 via:
https://channel.royalcast.com/hegnarmedia/#!/hegnarmedia/20210504_3

The Q1 2021 presentation is available on the company’s website: www.akercarboncapture.com

This information is considered to be inside information pursuant to the EU Market Abuse Regulation, and is subject to the disclosure requirements pursuant to Section 5-12 the Norwegian Securities Trading Act.

This stock exchange announcement was published by Katja Aanestad, Marketing Communications, Aker Carbon Capture on May 4, 2021 at CEST 07:00.