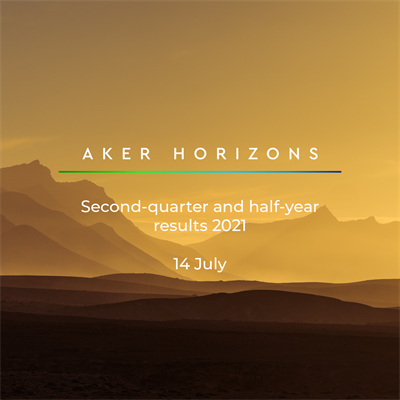 Aker Horizons today released its second-quarter and half-year results for 2021.

“It has been the most inspiring, challenging and fast-paced 363 days I have ever experienced,” said Kristian Røkke, CEO of Aker Horizons, nearly one year after the launch of Aker Horizons. “We’ve grown from a few dozen to 988 people and have formed key partnerships internationally with companies such as bp, Microsoft, Ocean Winds, Statkraft and Yara. All portfolio companies have made significant industrial progress in a short period of time and have established themselves as frontrunners in their respective fields.

We continue to see tremendous opportunity for Aker Horizons, but it is worth keeping perspective on the journey ahead. As Bill Gates has said: Meeting our climate goals and reaching net-zero emissions by 2050 means transforming our entire physical economy, and that will require accelerating the innovation pipeline at an unprecedented pace. We have to invest heavily now to bring down the costs of critical clean technologies.

This is precisely what Aker Horizons is committed to – planet-positive investing and innovation on an industrial scale that meaningfully contributes to necessary cost reductions for decarbonization. Our business model, by design, entails red numbers over the next few years for the benefit of frontrunning in markets with unprecedented growth potential. We remain confident that the combination of a planet-positive purpose with the Aker group’s industrial capabilities and a shareholder mindset, is a great recipe for value creation.”

Aker Clean Hydrogen progressed the Herøya Green Ammonia project with partners Yara and Statkraft and signed MoUs with Cape Omega and Shell for development of the Aukra Hydrogen Hub​ in Norway.

Aker Offshore Wind teamed up with bp and Statkraft for Sørlige Nordsjø​ II (Norway) and partnered with Ocean Winds for the ScotWind (UK) licencing round. During the quarter, the company also appointed industry veteran Philippe Kavafyan CEO of the company. Kavafyan was previously CEO of MHI Vestas Offshore Wind.

The transaction to acquire 75 percent of Mainstream Renewable Power was closed in the quarter, according to plan.

Mainstream Renewable Power acquired 80 percent of a 405 MW solar development portfolio in Vietnam, ​expected to reach financial close in 2022. The company completed the third and final phase of the USD 1.8bn financing for the “Andes Renovables” wind and solar platform in Chile and began delivering electricity to the Chilean grid.

Aker Horizons increased its revolving credit facility from EUR 170 million to EUR 400 million in the quarter by increasing facility commitments and bringing several new banks into the syndicate.The Aker Horizons share was transferred from Euronext Growth to Oslo Børs.Aker Horizons’ Net Asset Value (NAV) ended at NOK 15.6 billion in the second quarter, compared with NOK 15.9 billion at the end of the first quarter and NOK 12.8 billion w

hen the company made its market debut 1 February.

The Q2 presentation and First-Half Report are attached, and can be downloaded on akerhorizons.com
Aker Horizons will be presenting the Q2 results in a webcast at CEST 0930 today.
Follow the webcast here: https://channel.royalcast.com/hegnarmedia/#!/hegnarmedia/20210714_7

This information is considered to be inside information pursuant to the EU Market Abuse Regulation, and is subject to the disclosure requirements pursuant to Section 5-12 the Norwegian Securities Trading Act. This stock exchange announcement was published by Ivar Simensen, Head of Communications, Aker Horizons, on July 14, 2021 at CEST 07:00. 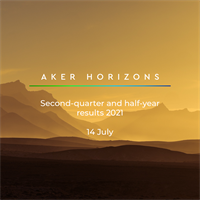