In addition to the visible gold previously reported, this latest result indicates that the high-grade mineralisation continues 50m further down dip than reported on the 4th November 2021. This discovery underpins the company’s belief that the Segele project can sustain a significantly longer mine-life than envisaged in the Scoping Study (27th September 2021).

In addition to the visible gold observations, since the release of the Scoping Study, the company has encountered several intersections of potential host rocks which are demonstrably down-dip from the resource estimate. The combination of the host rocks and visible gold is in-line with the general plunge of the mineralisation as seen in the resource model.

The visible gold now seen in hole SEDD87 along with the previously reported intersections with visible gold in SEDD53 and SEDD55 (released 4th November 2021) extend the known gold mineralisation over 100m to the Northwards down-dip of the mineral resource estimate (6th April 2021).

For illustration purpose only; 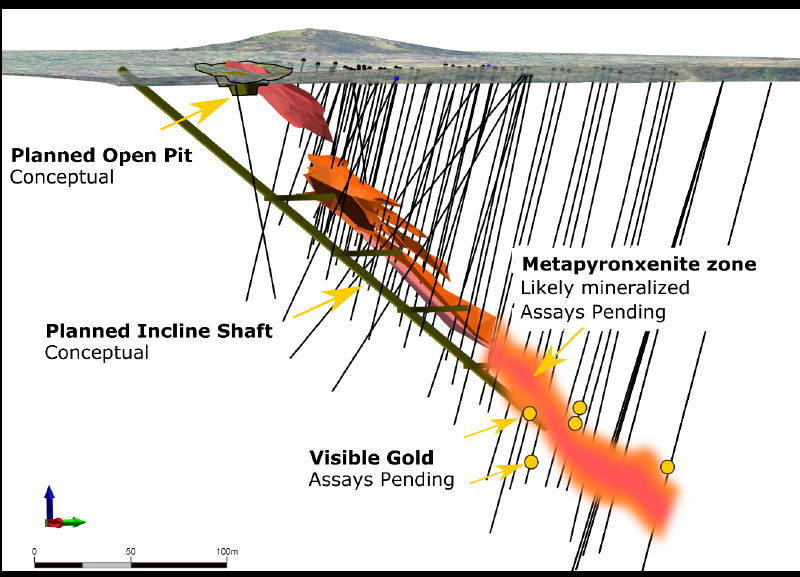 “The latest intersections are very exciting and confirm that the mineralized zone continues to expand and will have a significant impact on our resource estimate and mine-life in the future. With the latest visible gold we are quite certain the zone is still open at depth. The mineralized zone also displays a pinch and swell pattern at deeper levels which is an encouraging sign, even though we have to wait for the assay results to confirm the potential gold content.”

An updated resource estimate for Segele is expected to be released by end of Q1 in order to incorporate as much of the latest drill hole data as possible.

Akobo Minerals is a Norway-based gold exploration company, with ongoing exploration and small-scale mining developments in the Gambela region and Dima district of southwest Ethiopia. Operations were established in 2009 by people with long experience from both the public mining sector in Ethiopia and the Norwegian oil service industry. Following mineral discoveries, the company is engaged in mining studies to advance the project to production, alongside exploration core drilling.

Akobo Minerals is transforming itself to support an increased pace of core drilling. At both its key targets - in Segele and Joru - the company has released exceptionally high-grade gold results in the Segele deposit, while core drilling and trenching at Joru have intersected both high-grade gold zones and large wide zones near the surface. The company has an excellent partnership with national authorities and places ESG at the heart of its activities – including a ground-breaking community program.

Akobo Minerals has a clear strategy aimed at building a portfolio of gold resources through high-impact exploration and mining, while adhering to a lean business operation. The company is headquartered in Oslo and is listed on the Euronext Growth Oslo Exchange under the ticker symbol, AKOBO.

The Competent Person who has overall responsibility for the exploration results is Dr Matt Jackson BSc PhD MAusIMM. Dr Jackson is a Chartered Professional of the Australasian Institute of Mining and Metallurgy which is a Recognized Professional Organization (“RPO”) included in a list promulgated by the Australian Securities Exchange (“ASX”) from time to time. He is a full time employee of Akobo Minerals AB and has sufficient experience that is relevant to the style of mineralization and type of deposit under consideration and to the activity being undertaken to qualify as a Competent Person as defined in the 2012 Edition of the ‘Australasian Code for Reporting of Exploration Results, Mineral Resources and Ore Reserves’. Dr Matt Jackson consents to the inclusion in the report of the matters based on his information in the form and context in which it appears.

For complete disclosure of technical details, JORC Table 1 can be found at the company website, www.akobominerals.com