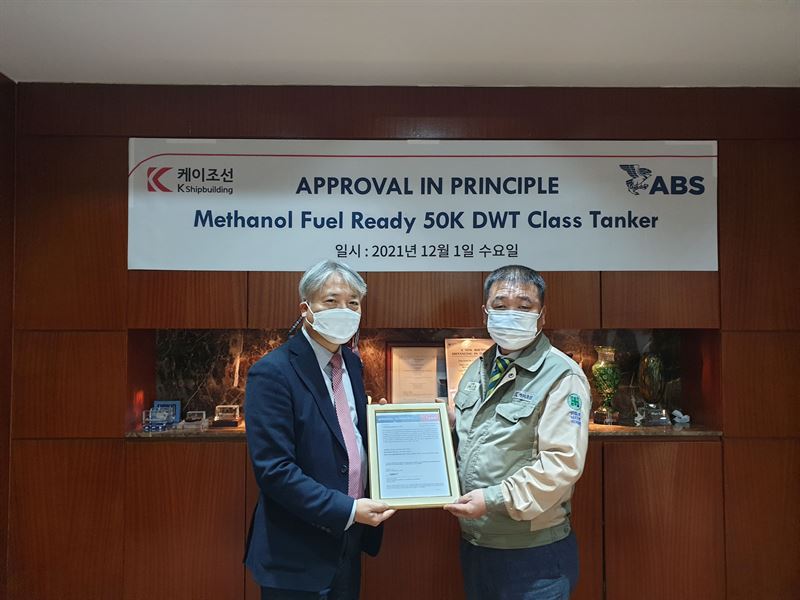 The AIP is the culmination of a five-month joint development project between ABS and K Shipbuilding evaluating a range of aspects including storage, bunkering and issues caused by methanol’s corrosive properties.

The basic design was reviewed in accordance with the principles of the ABS Guide for Gas and Other Low-Flashpoint Fuel Ready Vessels. When built, the vessel will be able to claim the ABS Methanol Fuel Ready Notation.

“Methanol is a fuel with a significant role to play in meeting shipping’s decarbonization ambitions. ABS is leading the way in helping shipping take advantage of its potential with industry-leading projects such as this. We are proud to be able to support K Shipbuilding in bringing this methanol-ready capability to market,” said Patrick Ryan, ABS Senior Vice President, Global Engineering and Technology.

“The AIP for methanol fuel-ready medium range tanker design is just the beginning. Now we are conducting the research and development on eco-friendly fuel-powered vessels such as LPG, ammonia and hydrogen to prepare for the future, and we will continue this R&D work to meet customers’ needs and environmental protection without any setbacks,” said Mr. Tae-Hyun Koh, K Shipbuilding Chief Technology Officer.

ABS is a world leader in methanol as fuel at sea. A groundbreaking series of eight large container vessels capable of being operated on carbon-neutral methanol ordered by Maersk, along with an option for a further four vessels, are to be built to ABS Class. ABS has also published detailed guidance on methanol as marine fuel, evaluating the challenges in design and operation of methanol-fueled vessels.

The ABS Guide for Gas and Other Low-Flashpoint Fuel Ready Vessels is available to download here. Download the Sustainability Whitepaper: Methanol as Marine Fuel here.