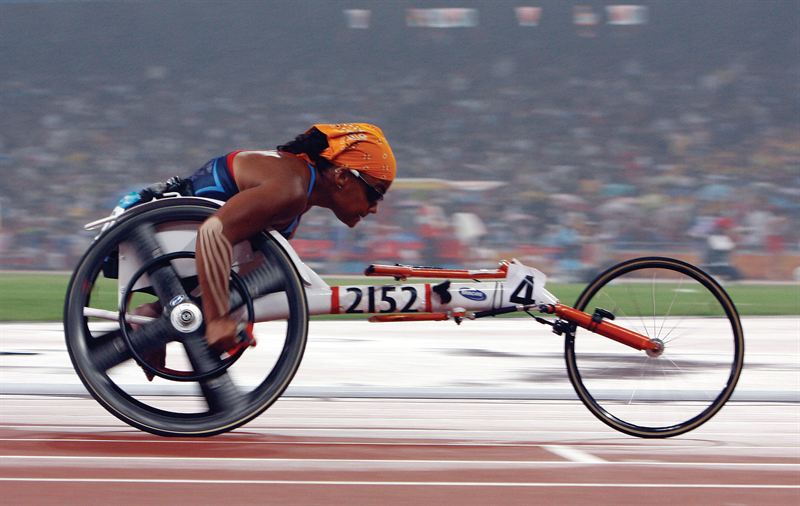 Hartford, Conn., Sept. 1, 2011 – One year from now, U.S. Paralympian Anjali Forber-Pratt hopes to fulfill her personal goal of earning gold in wheelchair racing at the London 2012 Paralympic Games. The Hartford is celebrating the achievements of Forber-Pratt and all of the athletes of U.S. Paralympics by launching the Achieve Without Limits contest.

"My story is powerful in that it shows the power of overcoming obstacles and that we all have potential to achieve ... even in the face of adversity," said Forber-Pratt.  "I see my story as igniting a fire for others to realize the potential they have in themselves.  They can learn from my survivor's tale and act upon their own life."

In The Hartford’s Achieve Without Limits contest, Americans are invited to submit a short video and brief essay describing a goal that they hope to achieve in one of three areas: small business growth, health and fitness, or community service. The top contestant in each category will receive a cash award and a U.S. Paralympic athlete mentor to put their plan into action next spring. The grand prize winner receives a trip to the London 2012 Paralympic Games to cheer on Team USA.

“We’re all inspired by the courage, confidence and commitment of U.S. Paralympic athletes who push themselves to achieve remarkable goals,” said Karen Tripp, executive vice president for The Hartford’s Marketing and Communications team. “We invite Americans to share in this passion for achievement by joining us in celebrating Team USA’s journey to the London 2012 Paralympic Games.”

Video entries in The Hartford’s Achieve Without Limits Contest are submitted via Facebook (www.facebook.com/TheHartford). The call for entries will close on Friday, Oct. 21. The Hartford’s Facebook community will vote on the top person per category in late November through mid-December. These three individuals will receive the achievement award and work toward their goals from January to May 2012. During that time, The Hartford’s Facebook page will include updates on three contestants’ progress toward their goals. The Hartford will announce the grand prize winner in June 2012. The contest’s complete rules are available here.

The Hartford has supported U.S. Paralympic athletes for more than 16 years and became the Official Disability Insurance Sponsor of U.S. Paralympics in 2003.  For more information on upcoming events check http://www.facebook.com/TheHartford.

Born in Calcutta (now known as Kolkata) India, Anjali lived in an orphanage for two and a half months before being adopted by her loving family from Natick, Massachusetts. Two months after arriving in the United States, she contracted an illness resulting in the diagnosis of transverse myelitis, a neurological disorder that affects the spinal cord. Rushed to the hospital, she was not expected to live. However, her fighting spirit prevailed and Anjali survived. Transverse myelitis left her paralyzed from the waist down. What some people might view as a tragedy, Anjali would come to view as a positive life altering event. Through this adversity she developed an innate drive and determination that she has utilized in every facet of her life.

Ranked as among the three fastest T53 women in the world (100M, 200M & 400M Events), Anjali is preparing for the London Paralympic Games 2012 by juggling a six-day-a-week training regimen along with the coursework required for her doctorate degree in Human Resource Education.

About The Hartford
The Hartford Financial Services Group Inc. (NYSE: HIG) is a leading provider of insurance and wealth management services for millions of consumers and businesses worldwide. The Hartford is consistently recognized for its superior service and as one of the world's most ethical companies. More information on the company and its financial performance is available at www.thehartford.com. Join us on Facebook at www.facebook.com/TheHartford. Follow us on Twitter at www.twitter.com/TheHartford.

Some of the statements in this release may be considered forward-looking statements as defined in the Private Securities Litigation Reform Act of 1995.  We caution investors that these forward-looking statements are not guarantees of future performance, and actual results may differ materially.  Investors should consider the important risks and uncertainties that may cause actual results to differ.  These important risks and uncertainties include those discussed in our Quarterly Reports on Form 10-Q, our 2010 Annual Report on Form 10-K and the other filings we make with the Securities and Exchange Commission.  We assume no obligation to update this release, which speaks as of the date issued.

Media Relations:  DM Productions LLC  'When You Want To Get Notice'