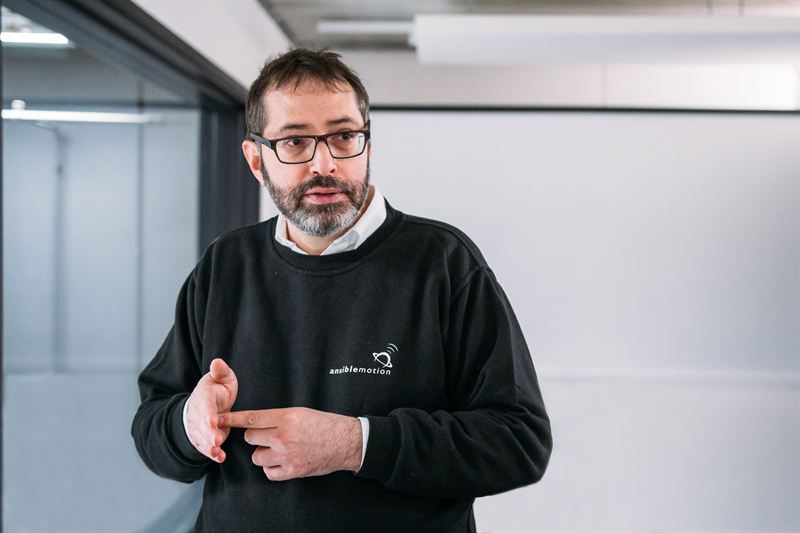 The day began with a presentation from Ansible Motion technical director and founder Kia Cammaerts, outlining the key challenges involved in developing an effective driver-in-the-loop simulator. Dan Walmsley, team principal of Strakka Racing, then explained the relevance of virtual testing from a race team’s perspective and the benefits it provides.

Following a technical tour of Ansible Motion’s facility, which includes a state of the art development simulator, the students were given the opportunity to experience driving in the virtual world first-hand.

“It was a fantastic day and unique opportunity to gain first-hand experience of one of the most advanced simulators,” comments Marco Bertulies-Esposito, Advanced Motorsport Engineering MSc student. “We were able to gain an understanding of the role of simulators in motorsport and automotive development. It was fascinating to see the depth of engineering involved in creating a realistic simulation.”

For Ansible Motion, it provided an opportunity to engage with the next generation of motorsport engineers – something which Cammaerts clearly enjoyed.

“I was delighted to see the enthusiasm of these students,” he adds. “We’ve always prided ourselves on asking questions at Ansible Motion and it’s great to see the same curiosity in the engineers of tomorrow. Hopefully we provided some answers that will stand them in good stead in their future careers.”

Founded in 2009, Ansible Motion was founded to create simulation tools that immerse real drivers in a compelling way such that they believe they are operating a real vehicle. Based in Hethel, Norfolk, it designs and builds a range of engineering class driving simulators suitable for all ground vehicles on the road and track. Ansible Motion believes the driver’s emotional involvement is key for creating a high quality simulation experience. It embeds detailed mathematical models of human anatomy such as the vestibular system into the software so that a driver will interact in a more realistic manner, ultimately delivering better feedback and data about how people and vehicles interact. Ansible Motion’s latest dynamic simulator, the Delta Series, is a new full motion driving simulator suitable for skilled drivers who wish to evaluate handling, steering and dynamic performance on virtual proving grounds and race tracks.