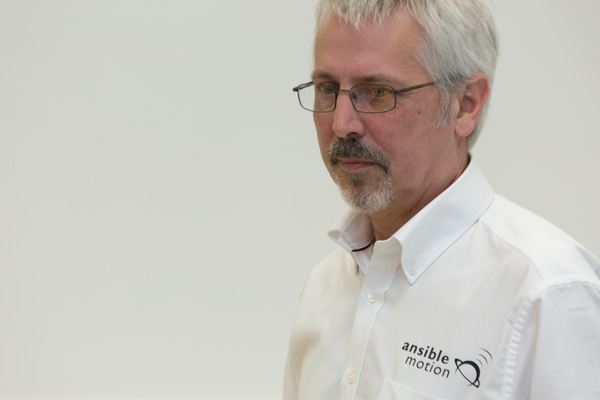 Hethel-based design engineer Bob Stevens has reached the finalist stage of the British Engineering Excellence Awards. Stevens, a designer at leading simulator manufacturer Ansible Motion, located at the Hethel Engineering Centre, was nominated for the coveted British Design Engineer of the Year award.

The award, now in its sixth year, recognises engineers capable of creating innovative designs within strict commercial limits. Stevens was responsible for the concept design, R&D and product development of Ansible Motion’s Driver-in-the-Loop simulators that are increasingly relied upon by car makers and motorsport teams around the world. The company recently opened its R&D Centre at its base at the Hethel Engineering Centre. The award also seeks to recognise engineers who work to promote engineering in the broader community. Since 2009, Stevens has mentored groups of Year 9 (13-14 year old) and Year 12 (16-17 year old) schoolchildren under the Engineering Development Trust (EDT) programme as well as hosting multiple work experience placements for schoolchildren looking to learn about design and manufacturing.

“It is a real privilege to get to the finalist stage,” says Stevens. “It is great that the awards also seek to recognise the importance of promoting the value of engineering to future generations. Facilities such as Hethel act as an incubator for technologies such as our Driver-in-the-Loop simulators and it’s equally important we nurture young talent in the same way.”

The winners will be announced at a gala lunch at the Hurlingham Club, London, on 29th October.

Founded in 2009, Ansible Motion was founded to create simulation tools that immerse real drivers in a compelling way such that they believe they are operating a real vehicle. Based in Hethel, Norfolk, it designs and builds a range of engineering class driving simulators suitable for all ground vehicles on the road and track. Ansible Motion believes the driver’s emotional involvement is key for creating a high quality simulation experience. It embeds detailed mathematical models of human anatomy such as the vestibular system into the software so that a driver will interact in a more realistic manner, ultimately delivering better feedback and data about how people and vehicles interact. Ansible Motion’s latest dynamic simulator, the Delta Series, is a new full motion driving simulator suitable for skilled drivers who wish to evaluate handling, steering and dynamic performance on virtual proving grounds and race tracks.