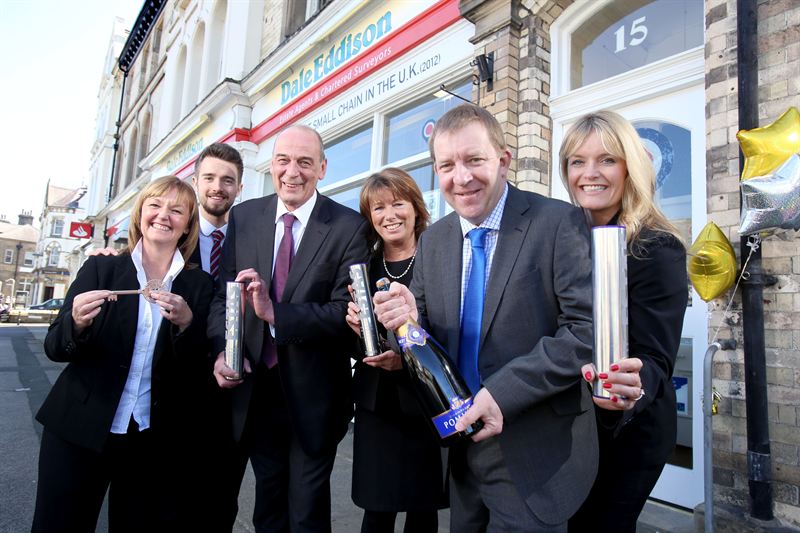 A Yorkshire-based estate agents has been awarded three national accolades including ‘Best Estate Agents in the UK’.

A Yorkshire-based estate agents has been awarded three national accolades including ‘Best Estate Agents in the UK’.

Dale Eddison, which has five offices across West Yorkshire, scooped four top awards at the prestigious ‘ESTAS’, the national estate and letting agents awards, winning, Best Local Agency Group, Gold and Silver in Yorkshire and Humberside for the Ilkley and Otley branches and the ultimate Grand Prix award for ‘Best Estate Agent in the UK’.

Founded by Bill Dale and William Eddison in 1992, the team of 40 spans five offices covering Ilkley, Otley, Guiseley, Silsden and its latest branch in Skipton which opened in January this year.  The news comes in the same year the firm appointed 10 new staff and announced a 40% share of properties sold in Wharfedale.

“When we started in Ilkley, the town had just four estate agents. Now that number has doubled, with agents clamouring for customers,” explained William Eddison.

“Four months after we opened our first branch with just two staff, no stock and lots of enthusiasm, Britain hit ‘Black Wednesday’,” William continued. “Interest rates soared to 15% and the housing market utterly petered out. But through it we learnt how to make sales happen and how to hold them together.

The company’s growth and employment of specialists including a financial services department, residential and commercial teams and experienced sales staff means it is now the market leader of all properties sold in Wharfedale and currently has more than 400 houses on its books with 40% sold subject to contract.

“Houses are selling faster than they are coming onto the market which puts pressure on prices as people are chasing a reduced number of properties. It’s a recipe for further house price inflation and that’s not always good,” William continued.

“Being named Best Estate Agent in the UK is the award every agent dreams of winning.  The ESTAS are based on what our sellers and buyers think, there’s no panel of judges, just the feedback from the people who really matter, our customers – no other agency awards have this level of kudos.”

He added: “After almost 25 years in the local property business we have the knowledge, the roots and the experience that has seen year on year growth in our property portfolio. House buying and selling is an emotive business and we genuinely care about every client we act for. With increasing restrictions on lending from the banks adding to the stress and time involved in the buying process, our focus on customer care is exactly what people, families and individuals need and as such, our awards speak for themselves.”

Dale Eddison estate agents was launched by Ilkley-based Bill Dale and Skipton-based William Eddison on The Grove in Ilkley in 1992The 40-strong team has 13 industry awards including ‘Best Small Chain’ clinched in 2009, 2012 and 2015 Branches were opened in Otley with director, Gary Shankland, and Guiseley with director Jonathan Barracllough, in 1995 following a merger with Richard Driver. Silsden opened in 2012 and Skipton, which employs a staff of three, in January 2015The ESTAS awards event is in its 12th year and was held at the Hilton Park Lane in London on Friday 17 April. It was attended by 800 of the UK’s top estate and letting agents in the UK property industryAgents where shortlisted in 18 regions around the UK with National Grand Prix awards announced for the Best Estate Agent in the UK and the Best Single Agent Office The awards were announced by TV property expert Phil Spencer