Cool curves and a pop of colour from Mobalpa 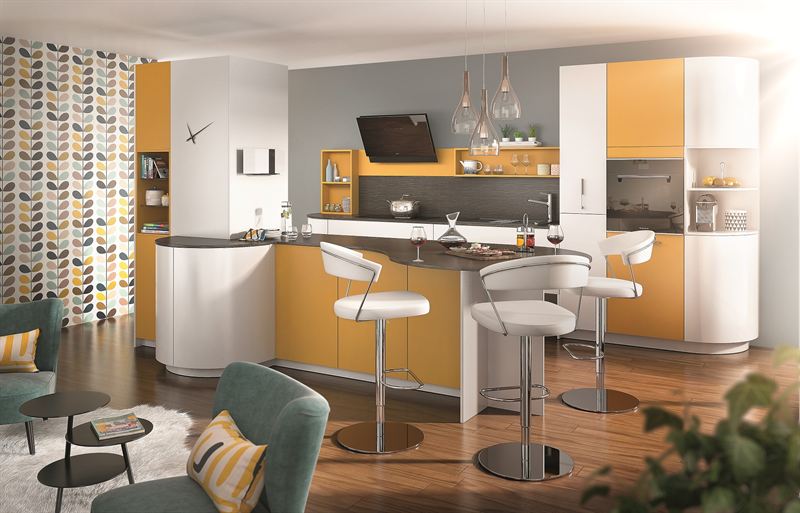 The Tallys curve in ochre and white is part of Mobalpa’s geometric inspired designs, with the curved cabinets offsetting the rigidity of the block colours. With a nod to the distinctive 1970s trend which is prominent in the design industry for 2015, the range encapsulates a modern and sophisticated take on colour through a simple, retro-themed design.

Curved and open cabinets used within the layout are ideal for appliance storage or displays and making the range more adaptable to a larger living area, while creating an element of space. The darker extended worktop and breakfast bar area adds depth to the design and provides additional space for seating, helping to create a relaxed environment.

The glossy finishes of both the warming ochre and graphic white brighten the room and can also lend themselves to an open plan layout, combing the kitchen space with a living area.

The choice of colours and units available allows the design to work alone or as part of an open-plan layout – something which continues to grow in popularity for households.”

Priced from £15,000, the Tallys range is available in 66 variations and colours. For more information visit www.mobalpa.co.uk.

Mobalpa began in 1907 as a family cabinetmaking workshop in Thônes in the French Alps. During the next 25 years the business that made wooden objects, began to specialise in kitchens and in 1949 launched the Mobalpa brand name. Mobalpa developed an international reputation and launched to the UK market in 1980 where kitchen cabinetry was supplied to distributors and then to the end consumer under the Mobalpa brand.

Today Mobalpa has four French production sites specialising in kitchens, worktops, living and bathrooms and employs more than 1,000 people worldwide. It launched its franchise kitchen concept in the UK in 2012 with its first retail store in Warrington and has ambitious growth plans to open 10 stores by the end of 2016.

The brand has now reached more than one million customers internationally and produces in excess of 27 kitchen ranges including handleless, curved and matt designs.

Mobalpa has franchises in Warrington and Richmond, Pinner and Chelsea in London.