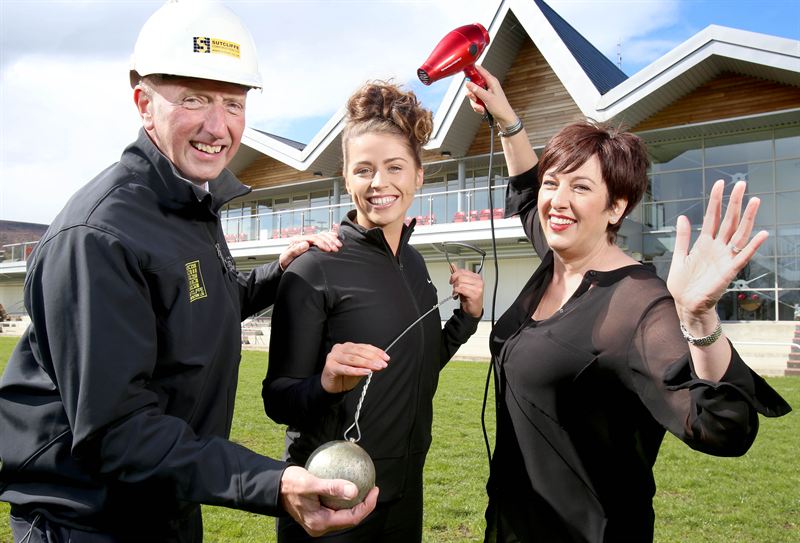 A North Yorkshire-based construction company has partnered with a Guiseley hairdresser to sponsor the kit, training and well-being support for England’s current number one female hammer thrower.

Cononley-based Jessica Mayho (21) is the North of England Hammer Champion, current number one in England and current number three in the UK for her sport which sees her lift, swing and throw a 4kg stainless steel ball and wire huge distances in national competitions.

With a £2,000 injection from Hellifield-based Sutcliffe Construction and a £500 donation plus a year’s hair styling from Claire Benson Hairdressing, Jessica’s training schedule, track fees, travel and kit costs will get a financial boost for 12 months, giving her the time to train and compete at a professional level.

Jessica’s 2015 competition schedule is focussed on throwing her personal best and working towards her first ‘international vest’ with the long term aim of representing Great Britain in the 2018 Commonwealth Games and the 2020 Olympics.

Aiming at medalling at the Amateur Athletic Association England Championships this year, she said sponsorship is a great help for young athletes wanting to represent the UK.

“Without support this year from Sutcliffe Construction and Claire, I would struggle to afford the fees associated with a career in sport. Everything I need to be the best athlete I can be has to be paid for such as petrol, physio, gym memberships, facility fees, equipment and the coaching,” Jessica explained.

“I do have a part time job but I need to work less and train more when working to national and international level. A typical week involves six days of training including four throwing sessions, two lifting sessions, plyometrics, circuits, a cardio recovery session, pilates and weekly physio. All my time and energy needs to be spent being the best I can be if I want to represent my country in the future.”

Sutcliffe Construction is a principal contractor and expert steel frame fabricator that specialises in commercial and industrial builds in the north of England. The team designed and built the iconic Ilkley Rugby Club in 2011 and recently completed builds for multinationals Cinetic Landis, Aggregate Industries, as well as local firms Advanced Component Technology, Byworth Boilers and Crown Paints. It has recently expanded employing six new site staff and two new specialists/managers, as well as launching a new mobile-friendly website.

Director, David Sutcliffe, said Jessica’s story is one of triumph over adversity after a sports injury while playing county level netball in 2010 took her into the world of athletics. “We met Jessica while she was working in Haworth and we immediately recognised her potential to represent Britain and felt compelled to help finance her journey. She’s an inspirational young woman who has already achieved so much and has real potential to be the face of British hammer throwing in the very near future.”

Claire Benson, an experienced hairdresser and businesswoman who employs two stylists and an apprentice, added: “I was shocked to hear how little support young athletes get in this country and how dependent they are on private funding. While I’ve been able to offer Jessica some cash support, I also wanted to bring her some quality time looking after her hair in between her gruelling training schedule to help her look, feel and then be her personal best!”

Jessica added: “The combined sponsorship of these two local businesses is helping to make my athletic dreams come true. It’s such a massive relief to know I can just focus on my sport without worrying how I’m going to cover my costs.”

Jessica, a former Bingley Grammar School pupil, started the 2015 hammer throwing season with a personal best of 59.03m after finishing the 2014 season at 56.54m. The International Athletics Association Federation entry standard for the Under 23 competition in Estonia this year is 60m while Team GB has set its standard at 65m, a challenge Jessica has not discarded

Sutcliffe Construction is a principal contractor and expert steel frame fabricator that builds all over the north of England and beyond. It believes in building smart to add value, forge successful partnerships and create a finished product that exceeds expectations. Sutcliffe has turned this approach into a way of working that has won it loyal customers nationwide and a growing portfolio of commercial and industrial builds up to £6 million

Based at Hellifield near Skipton, Sutcliffe Construction has evolved ‘building smart’ into a way of working that creates partnerships, adds value for clients and results in a finished product that makes owners’ proud. This approach has won it loyal customers nationwide and a growing portfolio of commercial, industrial and educational/institutional builds in the manufacturing, food, transport, and leisure industries

As principal contractors, the team works hard to understand what’s important to each client and excels at providing design and build improvements based on a ‘value-engineering’ concept that is cost-effective and reduces build time. Having its own steel fabrication factory helps to control critical aspects of a build project