The development of Bus Simulator 18 is a big step into the future of this popular city bus simulation franchise for creators and players alike. Thanks to the use of Unreal® Engine 4, bus fans can now not only look forward to huge changes in the game’s visuals but also the implementation of a wide variety of new features and detail enhancements.

Players who would like to test Bus Simulator 18 already before its official release and provide the developers with valuable feedback during the polishing phase of the game are welcome to complete their application form between March, 27 and April 4, 2018 under the following link: http://bit.ly/2DJgMvf

In comparison to its successful predecessor, Bus Simulator 16, Bus Simulator 18 comes with a brand-new, freely driveable map that is 2.5 times as large as the one of Bus Simulator 16 and will offer an even greater number of interesting city districts. Another new feature that will delight Bus Simulator fans: In addition to the originally licensed city buses by famous makers such as Mercedes Benz and MAN, Bus Simulator 18 will for the first time also include buses by the manufacturer IVECO.

Players will also find that many wishes coming from the game’s faithful community have been implemented in the newest version of the game. This includes the options to drive by day and night as well as an improved progression system and significantly expanded modding options, which now allow not only for the addition of the player’s own bus models but also the creation of whole new cities. To top it all off, Bus Simulator 18 now comes with a synchronous multiplayer mode where up to four players will be able to play together at the same time.

In order to give players and fans of the series a chance to thoroughly test the already very advanced stage of development, publisher astragon Entertainment and developer stillalive studios have now opened applications for a closed beta test of Bus Simulator 18. A unique chance not to be missed by any bus or simulation fans! 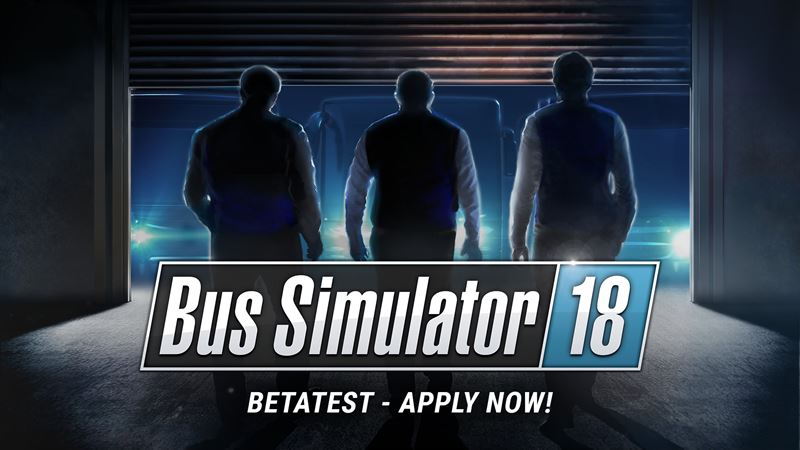 ©2018 astragon Entertainment GmbH. ©2018 Unreal, Unreal Engine, the circle-U logo and the Powered by Unreal Engine logo are trademarks or registered trademarks of Epic Games, Inc. in the United States and elsewhere.
All titles, content, publisher names, trademarks, artwork, and associated imagery are trademarks and/or copyright material of their respective owners. All rights reserved.

stillalive studios is an award-winning game development team whose goal is to create dynamic and unique games. The company was incorporated in early 2013 in Innsbruck (Austria) and today counts about 20 members. We are an experienced and enthusiastic team of game developers embracing both gameplay and technological challenges, working with both Unity and Unreal. For more information visit http://stillalive-studios.com/.

The astragon Entertainment GmbH and the astragon Sales & Services GmbH have emerged as the core of the newly created astragon group formerly consisting of the two games publishers astragon Software GmbH (founded in 2000) and rondomedia Marketing & Vertriebs GmbH (founded in 1998) in July 2015. Today, the astragon group is the second largest producer and marketer of computer games in Germany (number of units CD-ROM/DVD as per GfK Media Control, complete annual evaluation 2015). The main focus of the group’s product range lies with casual games and technical simulation games for PC. Adventure games and economy simulations complement astragon’s diverse portfolio. The popular game series “Big Fish Games“, “play+smile“ and “Best of Simulations“ form three strong umbrella brands by astragon in retail market. Additionally to the distribution to retail partners in the German language area by the astragon Sales & Services GmbH, products are also marketed internationally under license and via download by the astragon Entertainment GmbH. Games for consoles, mobile devices as well as smartphones and tablets complete astragons product range. For more information, please visit http://www.astragon.de/en/.