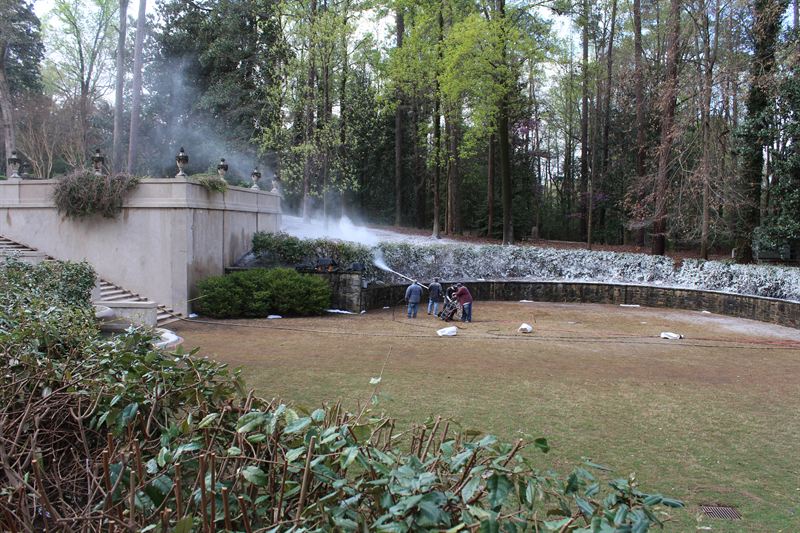 -Event to include tours, new exhibit, photo opportunities with Capitolites, visit to a District 12-styled home, signature cocktails and more-

Atlanta, GA – The Atlanta History Center’s Swan House, which has been included in the final three films in the “The Hunger Games” series, will present a full day of events on Sunday, November 22, on the weekend that its fourth and final installment, “Hunger Games: Mockingjay, Part 2,” premieres.

The “Storm the Capitol” event, to be held from 1 PM to 8 PM, celebrates the Swan House’s continuing role as the palace of President Snow in the middle of the fictional Capitol district.

The Atlanta History Center’s Capitol Tour, launched in November 2013 in conjunction with the release of “The Hunger Games: Catching Fire,” the first film in the series to use the Swan House as a location, is being updated to include information about the filming of “Mockingjay, Part 2.” The Capitol Tour will be offered throughout the day on Sunday, November 22.

The tour’s special exhibit, “Designing an Executive Mansion,” also has been enhanced to include information about “Mockingjay, Part 2,” with photographs from its production and objects shown in the new film.

The “Storm the Capitol” event will feature costume contests, Van Michael models appearing as Capitolites and posing for pictures with guests, as well as a Katniss Everdeen lookalike from Atlanta Movie Tours. The pioneer-era Wood Family Cabin in the woods adjoining the Swan House will be converted into a hardscrabble District 12 domicile, with actors portraying Primrose Everdeen and her mother.

After 5:30 p.m., a party starts with a deejay spinning tunes in the mood of the film series and signature “Mockingjay” cocktails being poured at the cash bar. The Nana G’s food truck will be purveying its signature chicken and waffles.

The Capitol Tour includes the opportunity to be photographed behind a dark-stained wood desk that has the appearance of the one used by President Snow (played by Donald Sutherland).

Actors involved in the shooting of “Mockingjay, Part 2” at the Swan House included Sutherland, Jennifer Lawrence, Liam Hemsworth, Woody Harrelson and Elizabeth Banks. Julianne Moore was among stars who toured the Swan House even though they had no specific scenes to shoot.

One of Atlanta’s most photographed landmarks, the 1928 Swan House is an elegant mansion designed in Italian and English classical styles of the first half of the 18thcentury by famed Atlanta architect Philip Trammell Shutze. It was built for the Edward H. Inman family, heirs to a cotton brokerage fortune, and provides an illuminating glimpse into the lifestyle of affluent Atlantans of the late1920s.

While the Inmans sought a family home that reflected the timeless qualities of fine residences that captured their imaginations during European travels, “Hunger Games” location scouts were seeking an edifice that projected power as the palace in a dystopian future ruled by President Snow.

“We’re imagining a future world, but we are basing it on places from the past. You can really imagine that (the Swan House) would survive through hundreds of years of turmoil,” said Banks, who portrays Effie Trinket.

Filmmakers used some of the Swan House’s furniture, including the swan console tables believed to be the inspiration for the recurring swan motif throughout the mansion as well as the inspiration for its name. They can be seen behind President Snow in several scenes in the series. Set decorators not only retained many of the Inmans’ bird-themed objet d’art, but added furnishings featuring birds.

The Swan House’s living room, which was converted into President Snow’s office for “Catching Fire,” was transformed into a Presidential Palace guest bedroom for “Mockingjay, Part 2.” The final film also used the mansion’s Boxwood Porch, where the Inman family once entertained, for a breakfast scene. The adjoining Boxwood Garden became the site of a scene showing the Victory Tour buffet dinner, complete with real food and colorful drinks.

The “Storm the Capitol” program is free to members; included in the cost of general admission for nonmembers. Half-price admission is available on-site after 5:30 PM.

Regular Swan House Capitol Tours are offered at 4 PM Mondays through Saturdays. Tickets are $10 plus the price of Atlanta History Center admission.