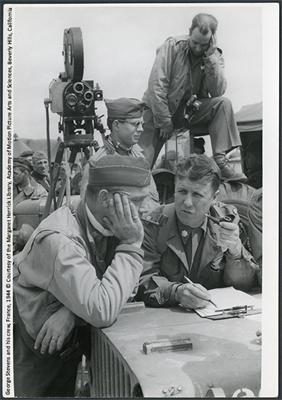 Atlanta History Center One of Only Two U.S. Venues to Share Extraordinary Accomplishments of Three Hollywood Directors Who Filmed the Liberation of the Camps

Hollywood directors John Ford, George Stevens, and Samuel Fuller provided audiences with cinema classics, including The Grapes of Wrath, Shane, and The Big Red One. But their most important contribution to history was their work in the U.S. Armed Forces and Secret Services, filming the realities of war and the liberation of Nazi concentration camps. Their documentation provides an essential visual record of the horrors of WWII.

Opening May 6, 2015, on the 70thanniversary of the liberation of the camp at Falkenau, the Atlanta History Center is honored to be one of only two U.S. venues to host the exhibition, Filming the Camps – John Ford, Samuel Fuller, George Stevens: From Hollywood to Nuremberg. Combining a wealth of material, including private letters and footage from their personal archives, Filming the Camps, on display through November 20, 2015, explores these filmmakers’ experiences during and after WWII, their confrontation with Nazi atrocities, and the mark it left on them as artists.

Created by the Mémorial de la Shoah (Paris, France), with thanks to the Academy of Motion Picture Arts and Sciences and the Lilly Library (Indiana University), and the participation of Christa and Samantha Fuller, George Stevens Jr., and Jerry Rudes, the exhibition presents rare, often unpublished archives, films, and photographs that enable today’s generations to observe the first-hand, day-by-day experience of these filmmakers.

The exhibition looks at these three directors and their film documentation of WWII and concentration camp liberation, its use as evidence during the Nuremberg trials (the first time movies were used as evidence), and as inspiration for Hollywood cinema. Artifacts include rare film footage, interviews, manuscripts, photographs, director’s notes, and additional video of WWII.

The curator, Christian Delage, designed the exhibition with the narrative at the center of the display, allowing the visitor to experience content rather than extensive text, and to keep the atmosphere appropriate to the subject matter.

“My main goal with the exhibit is to enable the audience to view the footage in its historical context and read the accompanying narratives written by the cameramen and writers, practically in real-time, as soon as they finished shooting for the day,” said Delage. “This level of detail adds much to our comprehension of the conditions of the camps and the complex experience of liberation from both the liberators and the inmates’ points of view.”

“Documenting history is why places like the Atlanta History Center exist – stories of our past, experiences from our shared history – those must be shared with current and future generations.  And over the years, history has been documented in a variety of ways. Filming the Camps in particular enables us to look at the role of technology in warfare, and how important it is to document wars for future generations, whether through film, photo, letters, or oral histories,” said Kate Whitman, Atlanta History Center’s Vice President of Public Programs. “The horrors of the Holocaust are only real to us seventy years later because we

have seen the photographs and videos made by the cameramen. Today, when global news coverage is at our fingertips, at all times, it is almost unimaginable to think of how impactful these were to people who had no real concept of the atrocities inflicted by the Nazis. These films have retained their power, and still hold important lessons for us today.”

In the early 1930s, John Ford, a member of the Navy reserve, established a unit of cameramen for the service. In 1939, the photographic unit of the 11th Naval Section became operational with a crew of sixty technicians by 1941. During the war, Ford headed the Field Photographic Branch, crafting Oscar-winning documentaries about Pearl Harbor and Midway. In 1945, he compiled images of Dachau taken by Stevens’ crew into a documentary later used as evidence of war crimes at the International Military Tribunal at Nuremberg. Ford also supervised the Field Photographic Branch filming of the actual Nuremberg Trials.

George Stevens, famous for his Fred Astaire-Ginger Rogers movies, directed the Special Coverage Unit during the war under orders from General Dwight Eisenhower. Known as “The Hollywood Irregulars,” Stevens’ forty-five-man film crew was composed of cameramen, writers, sound operators, and assistant directors. The crew covered D-Day, the Allied march through France, and the liberation of Dachau, April 29, 1945. After the war, one of Stevens’ noteworthy projects was the 1959 film, The Diary of Anne Frank.

Samuel Fuller, the son of two Jewish immigrants – his mother, Polish, and his father, Russian – established himself as a moviemaker after WWII. Prior to joining the 1st Infantry Division in 1942, he worked as a crime reporter and later had a career as a scriptwriter. At the instruction of his captain, he filmed the liberation of the Falkenau camp, using a camera that his mother had sent him. This was his first filming experience. He subsequently had a successful film career, directing more than twenty-five films, including the 1980 film, The Big Red One, which reflects on his wartime experiences.

A Team of Professionals with a Precise Mission

The exhibition focuses on the Dachau and Falkenau camps and enables the public to understand the particular working conditions of the American cameramen. The teams established by Ford and Stevens contained professionally recognized, experienced filmmakers trained for the task.

The Field Photographic Branch work orders display how the cameramen who were to be faced with Nazi crimes were to follow precise instructions in recording the events they were about to witness – the question of the validity of the film footage as evidence in the subsequent trial had already been raised.

The cameramen were to draft a commentary each day of filming, either in the form of a “caption sheet,” or in a more elaborate “master caption report.” In the “weekly photographic report,” one of the Special Coverage Unit officers, often Stevens himself, drafted a summary of the week’s filming.

For the first time, the exhibition presents a selection of the footage in chronological order accompanied by a facsimile of the cameramen’s commentary.

From Documentary to Fiction

After having filmed war and genocide on-site, what is the impact of that history on the later work of these filmmakers? The overlap between fiction and documentary reveals the ethics of the filmmakers and the historical awareness that guided them.

With four Academy Awards, John Ford is the most decorated director in film history with The Informer, The Grapes of Wrath, How Green Was My Valley, and The Quiet Man. In addition to those four, he also received Oscars for his two wartime documentaries, The Battle of Midway and December 7th. During his postwar career he directed additional military-based films, including They Were Expendable and Mister Roberts.

Before the war, George Stevens was the director of Fred Astaire and Ginger Rogers, and Katherine Hepburn and Spencer Tracy, as well as Cary Grant, Irene Dunne, and Carole Lombard. Afterward, he was the award-winning director of more serious cinema, including A Place in the Sun, Shane, and Giant – these and other films dealing with social class, homicide, alcoholism, gambling, and violence. His wartime legacy is undoubtedly his 1959 film, The Diary of Anne Frank, which received three Academy Awards.

In his 1959 film, Verboten!, Samuel Fuller, who filmed the liberation of the Falkenau camp, May 6, 1945, shows the screening of George Stevens’ footage of the Dachau camp liberation – as edited by John Ford – before the International Military Tribunal in Nuremberg. His film The Big Red One made in 1980 uses a sequence in Falkenau.

The exhibition sheds light on the footage and circumstances of the first Jewish service held in Dachau on May 5, 1945. At the insistence of George Stevens, it was held in the main square with soldiers surrounding the service in order to make the participants feel safe from the threat of violence from the Polish inmates of the camp.

George Stevens’ excerpts interviewing 15 survivors of Dachau in May 1945. Cameras with synchronous sound recording equipment were very rare at the time, which makes these early interviews exceptional. When editing his new documentary, curator and filmmaker Christian Delage and his editor found one frame that showed that George Stevens conducted the interviews with the survivors himself—a brand-new discovery.

Filming the Camps, curated by historian and film director Christian Delage, was designed, created, and distributed by the Mémorial de la Shoah (Paris, France), and made possible through the generous support of SNCF. Atlanta’s presentation of Filming the Campsis made possible through the generous support of the Scott Hudgens Family Foundation, Victoria and Howard Palefsky, the Rich Foundation, Jackie and Tony Montag, Count and Countess Ferdinand and Monique Seefried, the Consul General of France Denis Barbet, and Dr. James Braude.

Filming the Camps is free to members and included in the price of general admission for nonmembers. For more information on the exhibition or accompanying programs, please visit AtlantaHistoryCenter.com/Filming. Visit the Memorial de la Shoah’s exhibition website at www.memorialdelashoah.org/upload/minisites/filmer_les_camps.

About the Mémorial de la Shoah, Paris, France – Understanding the past to illuminate the future

More than 65 years after the discovery of the death camps, knowledge about the Holocaust helps to fight against all forms of racism and intolerance. As the largest information center in Europe on the subject, the Mémorial de la Shoah offers guided tours, public programs, permanent and special exhibitions, and many other activities for a better understanding of the history of the genocide of the Jews during World War II, through both individual and collective destinies. The Mémorial’s Wall of Names is engraved with the 76,000 names of the Jewish men, women and children deported from France between 1942 and 1944, while the Wall of the Righteous – a glimmer of hope in the dark history of the Holocaust – pays tribute to the men and women who risked their lives in France to rescue persecuted Jews. The Center for Contemporary Jewish Documentation – through its exceptional collection of several million of archives, including photographs, books, original records, posters, and private correspondences made accessible to everyone – testifies to the life of the Jews in France and Europe under the Occupation. www.memorialdelashoah.org

Christian Delage is a historian, filmmaker and curator. He is currently Professor at the University of Paris 8 and the director of the Institute for the history of the present time (National Center for Scientific research). He is also a regular Visiting Professor at the Cardozo Law School (New York City).

Since the mid-1990s he has worked on the history of the Holocaust, the filmed record of the liberation of the Nazi camps, and the Nuremberg trials. In 2006, his book La Vérité par l'image: De Nuremberg au procès Milosevic was published in France, and in 2007 his documentary Nuremberg: The Nazis Facing Their Crimes premiered at Lincoln Center.  He also served as a policy advisor on the filming of the Khmer Rouge trials, and produced Cameras in the Courtroom, a documentary discussing the issues of filming trials.

Chrisitan Delage has shaped the permanent exhibition of the Compiegne’s Internment and Deportation Memorial. His last film, From Hollywood to Nuremberg: John Ford, Samuel Fuller, George Stevens, has just won an award from the SCAM (an association gathering all the French Documentary filmmakers).  In 2014, Delage published, at Upenn press, Caught on Camera: Film in the Courtroom from the Nuremberg Trials to the Trials of the Khmer Rouge. He recently wrote a piece in the collective book, Getting the Picture: The Visual Culture of the News, edited by Jason Hill and Vanessa R. Schwartz, published at Bloomsbury in February 2015. 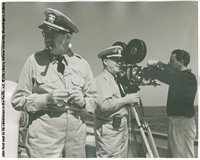