As a Christmas gift for the Attana community, a new scientific paper was published in Cell Reports on Christmas Eve.

Dying cells in the body can keep the immune system in check, thus preventing unwanted immune responses against the body's own tissues. Prof. Krammer´s group at the German Cancer Research Center have now identified the receptor Dectin-1 on immune cells that activates this protective mechanism and can, thus, prevent dangerous autoimmune reactions in which the immune system attacks the body´s own tissues. Attana´s cell-based technology was used to characterize and validate the Dectin-1 receptor interaction with different biological entities. In conclusion, these finding may provide future strategies for treatment of autoimmune diseases.

Dying cells in the body can keep the immune system in check, thus preventing unwanted immune responses against the body's own tissues. Scientists from the German Cancer Research Center have now identified a receptor on murine immune cells that activates this protective mechanism and can thus prevent dangerous autoimmune reactions in which the immune system attacks the patient's own body tissues.

Billions of cells die every day in the human body. This occurs as part of a process called apoptosis or programmed cell death. The dying cells confront the human immune system with large amounts of proteins, which ought to activate an immune response, but the apoptotic cells seem to actively suppress the immune system so that it does not attack the body's own tissues.

"We began wondering many years ago what kind of protective mechanism prevents autoimmune reactions—the body attacking its own tissues—when cells in the immune system, such as dendritic cells, take up the remains of the dead cells," Prof. Peter Krammer, at the German Cancer Research Center (GCRC), remarked.

Krammer, his colleague Heiko Weyd, and their team recently found an answer to the question: As soon as apoptosis is triggered, the dying cells transport proteins from the annexin family to the cell surface. The annexins act like a stop signal for the cells of the immune system and prevent an immune response from being triggered.

Kevin Bode from Krammer's team has now used Attana technology to identify the Dectin-1 protein as the annexin-binding receptor on the surface of dendritic cells: Dectin-1 recognizes the annexins and triggers a signaling pathway in dendritic cells that ultimately suppresses the immune response. The findings are supported by observations in mice.

Mice that do not have any Dectin-1 on the surface of their dendritic cells showed a stronger immune response to dying, apoptotic cells. Moreover, the mice without Dectin-1 developed signs of autoimmune diseases in old age.

"But we assume that the body has other protective functions to prevent autoimmune reactions too. That's why the loss of dectin-1 in the animals does not become apparent until later in life," Bode explained.

"Interestingly, Dectin-1 has a dual role," added Peter Krammer. Dectin-1 not only binds annexins; it also binds certain pathogens at a different binding site. This has the opposite effect and triggers an immune response. "We thus identified a crucial immune checkpoint which, depending on the binding partner, either triggers or suppresses the immune response," Krammer explained, emphasizing the importance of the work.

Autoimmune diseases have a hugely detrimental impact on patients' lives and in some cases are even life-threatening. In order to develop effective treatments, it is therefore vital to know which mechanisms suppress the immune responses to a patient's own body tissues or in contrast activate them. With the Attana technology and animal experiments the interaction between annexin on the surface of dying cells and Dectin-1 on the dendritic cells, Bode and his colleagues identified a key mechanism that prevents autoimmune reactions in healthy body tissues. In doing so, they have found an interesting starting point for future drug treatments.

In this paper Attana´s cell-based QCM technology was used to kinetically characterize the interaction between annexing proteins and Dectin-1 expressing cells as well as with control cells not expressing Dectin-1. High affinity interaction between Dectin-1 and annexins was shown. Additionally, Attana´s technology identified other interactions (off-target) between annexins and cells. The combined results demonstrated the need to package the annexins to maintain the high affinity interaction with Dectin-1 and to remove the off-target interactions. This packaging may enable annexins to be used as a target specific drug.

As demonstrated in the figure below the researchers at GCRC succeeded to package a highly Dectin-1 specific annexin entity. 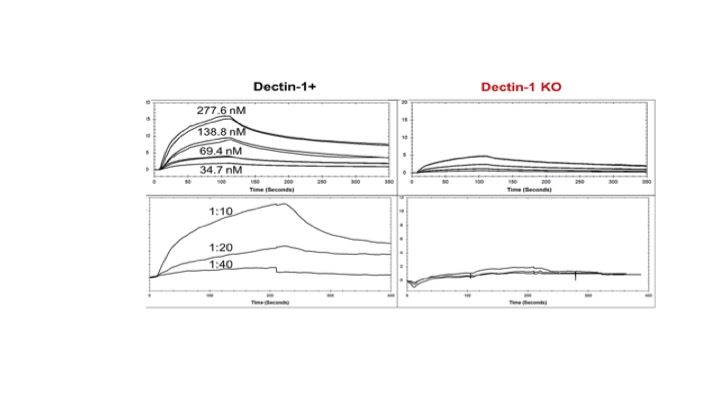 Hence, therapeutic packaging of the annexin entity may provide future strategies for treatment of autoimmune diseases.