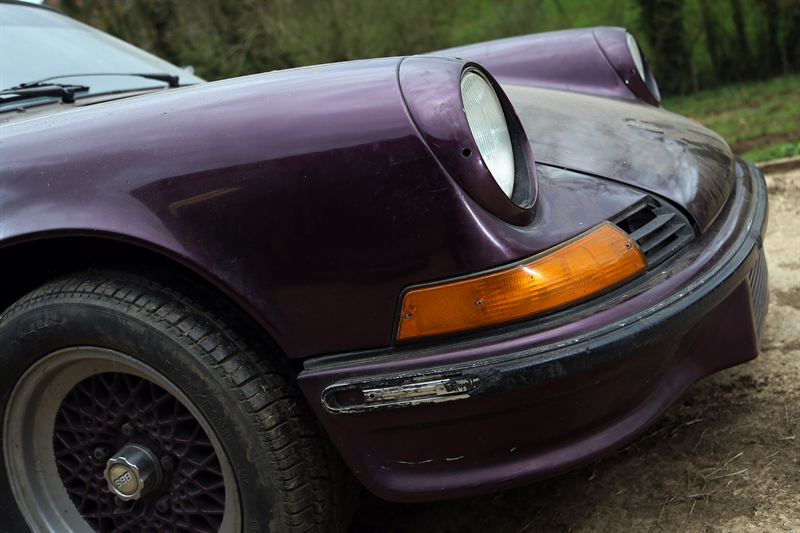 BICESTER – Independent Porsche specialist Autofarm has continued its knack of uncovering rare Porsches with its latest find, originating all the way from Trinidad. After a colourful ownership history, the last RHD RS 2.7 Touring Carrera produced, chassis 1576 of the 1590 is also just one of 16 Royal Purple cars built, has been brought back to the UK via the US by Autofarm’s Josh Sadler.

Sold in the UK in 1973, it was exported to Trinidad in 1978. Having passed through a small number of owners on the island, it was laid up in the late ‘90’s, and then left to bake in the Caribbean sun for some 14 years after its last owner was tragically murdered in 2002.

Despite having received a number of 1980’s style cosmetic modifications over its life in Trinidad, including the rear wing, alloy wheels, tinted windows and aftermarket seats and steering wheel, Autofarm has found an original survivor of the 94 RHD UK Tourings produced. Peel off these latter day accoutrements and Autofarm has discovered a ‘matching numbers’ RS 2.7 with the added kudos of being the last RHD to leave the factory. With so many RS ending up in competition, cars with a documented history and retaining their core originality are extremely rare.  And this one has also thankfully retained the unique ‘homologation’ technical features of the very last of the RS series, the ‘short’ trailing arms for what became the Turbo suspension geometry, and the stronger Silumin crankcase, the material used on the 1974 3.0 RS and RSR’s.

“The RS 2.7 is now highly revered by collectors and enthusiasts,” says Autofarm’s Josh Sadler who freighted the 911 back from Florida. “Having worked and raced these cars since they were new and tracked a fair few over their lives, we are often contacted about cars, either for sale, or for help with sourcing or checking if they are genuine specification. A good contact Rikard Asbjornsen in the US alerted us to this car. As is often the case, especially given the circumstances of the former owner’s demise, the family was understandably cautious about enquiries.  They actually started to cover the car up with old furniture to conceal it and a number of dogs patrolled the garden. Eventually Rikard was able to agree a deal with the daughter and got the car back to Florida and I acquired it from him there."

The condition of the car surprised Sadler, who has turned up a considerable number of barn find 911s. “It had literally baked in the sun,” adds Sadler.  “The fuel tank was completely dry and I’ve never seen that. However, it remains a very good car and very rare in purple, though it has subsequently received a later metallic hue. Retaining matching numbers is remarkable and we are already in contact with the original exporter so hope to continue to gather ever more details of its fascinating history.”

Plans for the car remain fluid with Sadler debating to either sell or restore it, or even to get it running again and use it ‘as is’. “The modifications we now view as tasteless, but they do tell the tale of the car. It has led a remarkable life and the murder of its owner meant it was left undisturbed for a considerable time. I’m sure it will be worth a lot more if restored but cars are all about their owners and I’ve fallen for the story of this one.”