A simple number crunching exercise was enough to show driving instructor George Buckingham that converting his car to LPG was the way forward.

In its most simple terms he quickly worked out that after the conversion he would then be £2,000 a year better off by running on LPG - and considering he made the switch five years ago, that’s now adding up to quite a hefty saving.

The Peterborough-based instructor is able to use the lower running costs and pass them on to his students by offering very competitive fees, although it is predominantly his good reputation that keeps him very busy.

His current model, a Hyundai i30, has a range of around 250 miles on a tank of LPG which only costs about £28 to fill.

“I first heard about LPG in a trade publication and decided to do some investigating myself. It soon became apparent that I would start saving dramatically on my fuel bills.

“That was five years ago and I’m now driving my second LPG converted car. Considering my annual mileage is about 30,000 miles, well above the average, it has performed incredibly well and if I didn’t tell my students it was dual fuel car then they wouldn’t even know,” explained George.

With hundreds of successful students passing their driving test under his guidance, it’s soon time for George to retire, but there will not be any let up for his Hyundai as his retirement plans include becoming a steam train volunteer on the North Norfolk Line, affectionately known as the Poppy Line, a good two hour drive each way.

“Once again, the cost saving element of LPG will make a real difference if I’m able to help out as a steam train volunteer at Sheringham, and it goes without saying that every penny counts - especially in retirement,” added George.

Typically LPG users save up to 40 per cent in their annual fuel costs over petrol alone, while the fuel is also environmentally better compared to petrol or diesel.

Paul Oxford, business development manager, Autogas, said: “We already know of many other businesses that are benefitting financially by converting to LPG, so to also hear of George’s experience is very welcoming.

“However, it’s not just those who use their car for work that should consider converting to the cheaper and cleaner fuel as pump prices are typically about half that of the petrol or diesel, making it as sensible option for all motorists.”

For more information about Autogas and the benefits of converting to LPG, visit www.autogas.ltd.uk 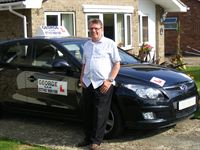