Creator of €500,000 luxury car keys teams up with Formula One legend, Mika Salo 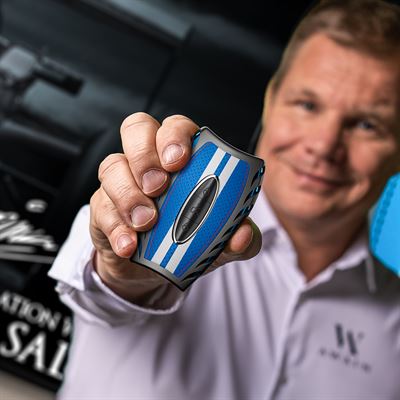 Awain, the manufacturer of the world’s finest car keys, announces an exciting and exclusive collaboration with former Formula One and Le Mans legend Mika Salo. The new Formula One inspired Grand Prix Collection is hand-crafted from titanium and incorporates the finest racing leathers in its exclusive silhouette. The collaborative design makes for a thrilling addition to the impressive line of bespoke and limited-edition luxury supercar keys offered by Awain.

Awain Ltd. has announced the immediate launch of their Mika Salo themed supercar key collection. Awain is renowned for their exclusive offering of the world’s most desirable line of luxury supercar keys, including their flagship, the Phantom, a one-of-a-kind piece inlaid with 34.5 Carats of diamonds set in 175 grams of solid gold and priced at €500,000.

Awain’s new Mika Salo Grand Prix Collection keys are priced at €9,999 and include three models: Monaco, Spa, and Suzuka – three of Mika Salo’s favorite racing circuits. With enthusiastic input from Salo, who hails from Finland, Awain’s Nordic design team selected the same color-scheme that Mika proudly wore on his Formula One helmet – blue and light blue, with a red stripe. The new series is offered in strictly limited editions of 20, making each of these three keys highly collectible.

A high-tech luxury key requires a high-tech process – and no corners were cut in Awain’s advanced design process, ensuring that the final result performs at the same precision level as an F1 instrument. In keeping with the cutting-edge spirit of Formula One racing, the designers selected only the most lightweight and advanced materials and processes for the manufacturing of these exclusive keys. Materials such as high modulus carbon fiber and aerospace grade titanium are used to guarantee the ultimate performance experience for every new Awain owner.

As an additional enhancement to the standard Grand Prix Collection, Awain is offering to a group of selected customers the opportunity to customize their Grand Prix key with an actual F1 engine part. These extraordinary pieces feature an authentic FI valve plate on the key’s back, which links the key directly to the F1 world.

In order to incorporate the new metal alloys and design elements without compromising the distinct Awain look, a complete re-engineering of the product was needed, with more than 70 iterations of the elements completed before a final product was designed. In fact, every Awain key is handcrafted to the very highest standard, with the manufacturing of each of the Grand Prix collection keys requiring more than 50 hours of work by skilled artisans.

Mika Salo comments, “Even outside of racing, I’m big car enthusiast and I’ve been lucky to drive lot of fancy cars in my life. I have often wondered why the car keys for even very luxurious cars are cheap-looking and usually made from plastic – in other words, they don’t match their car at all. When I saw my first Awain key I immediately realized that this is what the key of a true supercar should have always looked like. The amount of craftsmanship and eye for detail in each custom-crafted Awain key is simply amazing. And of course, it’s an honor to now have a collection that commemorates the highlights of my own racing career.”

“In my earlier role as a motor journalist, I of course followed Formula One racing –including the career of Finnish Formula One great Mika Salo – very closely”, states Awain CEO, Jalmari Mattila. “To have a racing legend of the professional and personal caliber of Mika Salo collaborating closely with our company is both an honor and a great opportunity for us,” Mattila continues. “As a passionate car enthusiast myself, I believe that the very best cars in the world deserve the very best keys, and our pieces – including the new Mika Salo Grand Prix Collection – really make a statement of excellence for the passionate motoring enthusiast.”

The new Mika Salo Grand Prix Collection keys are available world-wide, and can currently be viewed in person at the Car Vault luxury car showroom in Dubai – and, by special appointment, around the world.

Awain Ltd. is a privately-owned company based in Finland, with headquarters in Helsinki, Finland and offices in Dubai. The company was established in 2018 and delivers exceptional and innovative handcrafted jewelry, produced by a select team of top Nordic watchmakers, designers, and jewelers, to its global clientele. Their entire 2019 collection can be found at awainkey.com.

Mika Salo (born 30 November 1966) is a legendary Finnish racing driver who has driven well over 100 races in the F1 series and won the 24 hour Le Mans twice in his career.

He debuted in Formula One at the Japanese Grand Prix in 6.11.1994 at the Suzuka Circuit. During his career in F1, he raced for the teams: Arrows, BAR, Ferrari, Sauber, Team Lotus, Toyota and Tyrrell - enjoying most success while driving for the Ferrari team. Since his career at F1, Salo has been racing in many competitions such as FIA World Endurance Championship, International Superstars Series, V8 Supercars, GT1 World Championship and 24 Hours of Le Mans, which he also won with his team mates in 2008 and 2009.

Known as an extremely hard-working driver among his colleagues and as a bit of a rebel by the wider audience from stunts such as dying his hair blue to show the figurative finger to the Toyota racing team management in a one notorious press conference, Mika Salo enjoys wide respect amongst the current racing professionals. Due to the respect he commands, several racing teams supported his nomination to FIA’s commission, where he currently holds the single seater position.

Today, in addition to holding the position as a judge in FIA, he consults younger drivers and their teams, guiding them to fulfil their own ambitious dreams of race and glory. 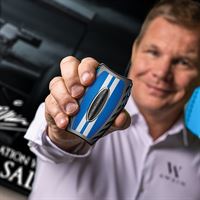