Through music and discussions, the Baltic Sea Festival wants to highlight the importance of tolerance, democracy and shared responsibility for a sustainable region. The programme spans seven festival days of first-class music and seven discussions, where some of the most interesting personalities from our region come together. The discussions, which will take place in front of audiences in cities around the Baltic Sea, are an integral part of the festival, and will be broadcast live in the host cities as well as at Berwaldhallen. Using digital technology, the festival and music can reach out live throughout the Baltic Sea area. As always, music is at the heart of the festival and just as in previous years, the Baltic Sea Festival offers a week of exhilarating music. 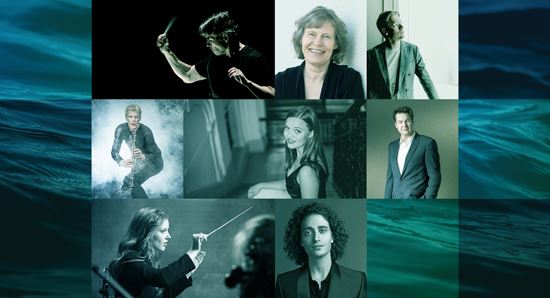 – I think the Baltic Sea Festival gives us the chance to create musical events which are a bit different from what we do in Berwaldhallen over the rest of the season, and to make different and thought-provoking statements. There are so many really interesting projects, but personally I cannot wait to see the youth opera Brundibár in the Great Synagogue in Stockholm, to hear Mozart Arias sung by Peter Mattei interwoven with movements of Ravel’s Le Tombeau de Couperin, and to watch Charlie Chaplin’s landmark film “The Immigrant” with a live soundtrack from the Radiokören…  I think these are all truly unique moments, as well as being moments which highlight current day issues through music and performance, says Christian Thompson, Head of Artistic Planning at Berwaldhallen.

The festival opens on Saturday, August 22 with a talk from Oslo on Joseph Haydn’s The Seven Last Words of Our Saviour on the Cross, with the Stenhammar Quartet, and attended by seven representatives of the world’s religions. The following day, August 23, there will be a performance of the opera Brundibár with the Adolf Fredrik Church’s Treble Choir and Youth Choir, held in the Great Synagogue of Stockholm. The opera was written by Hans Krása in 1938, and was performed in the Theresienstadt concentration camp, north of Prague, from 1943-44. There will also be works by Jacob Mühlrad and Brett Dean performed by The Swedish Radio Choir.

A novelty this year is that the festival will also take place at Radiohuset (the Swedish Radio headquarters), where we present Concert Cinema in Studio 2, from Wednesday to Friday, highlighting Baltic music, with Berwaldhallen presenters acting as curators.

On Wednesday August 26, Karin Rehnqvist’s choral and orchestral work Silent Earth will have its Swedish premiere, performed by the Swedish Radio Symphony Orchestra and the Swedish Radio Choir, conducted by Dima Slobodeniouk. After the intermission, we will hear Modest Mussorgsky’s Pictures at an Exhibition.

On Thursday August 27, “Martin Fröst and the Swedish Chamber Orchestra”, with Martin Fröst conducting and playing the clarinet, perform Mozart’s Symphony No. 38 in D major, the Prague symphony, as well as Mozart’s Clarinet Concerto. There will also be the Swedish première of Nomadic Dances, by Martin and Göran Fröst.

On Friday August 28, the Chaplin film The Immigrant will be accompanied by a live soundtrack provided by the Swedish Radio Choir. The concert also presents Swedish première of Sven-David Sandström’s Sonnets of Darkness and Love.

The festival concludes on Sunday August 30 with a magnificent guest performance by the Finnish National Opera orchestra, led by Esa-Pekka Salonen. We will be enjoying acts from Richard Wagner’s Siegfried and Der Walchüre with soprano Miina-Liisa Värelä as Sieglinde, and tenor Norbert Ernst as Siegmund, as well as numerous other soloists.

Discussions about sustainability and music

Europe is experiencing growing protectionism, and national borders are becoming increasingly important. The Baltic Sea region with its shared and boundless water is no exception. The theme of this year’s festival is tolerance, collaboration and shared responsibility for a sustainable region. This will also be the focus of the discussions on stage, which will take place before each concert during the festival. The discussions will feature artists, politicians and other policy makers from the participating cities: Helsinki, Gdansk, Riga, Vilnius, Copenhagen, Oslo and Stockholm. The discussions will be streamed live on the website, balticseafestival.com, as well as being displayed on large screens in both Berwaldhallen and the participating cities.

– We are happy to be able to welcome two new cities to this year’s festival – Gdańsk and Oslo. We are also hoping that the audience will be as inspired as we are by the discussion programme, a concept we introduced last year. This year, the talks will revolve around what we have in common, using music as a springboard. It will be about tolerance, collaboration and our shared responsibility for the future, says Kajsa Hallhagen, Project Manager for the Baltic Sea Festival.

Oslo will open the discussions at the Voxenåsen Cultural Centre. On the final day of the festival, discussions will be held at the National Library in Riga. Stockholm will host the discussions in Berwaldhallen on August 26, between composer Karin Rehnqvist and sustainability expert Johan Kuylenstierna. MO Museum of Vilnius is also a new stage this year.

A novelty for this year’s festival is that several of the activities will take place in Studio 2 at Radiohuset. Here, we will be presenting Concert Cinema over the course of three days with the Tallinn Chamber Orchestra and the national symphonic orchestras of Latvia and Lithuania, with the Berwaldhallen presenters as cicerones. The Swedish Institute of International Affairs will hold a major seminar in partnership with the Swedish Institute. All the activities at Radiohuset are free of charge.

When, Where and How?

Voksenåsen in Oslo, Hanaholmen in Helsinki, the National Library in Riga, the MO Museum in Vilnius and the Black Diamond at the Royal Library in Copenhagen, will broadcast the concerts live on large screens following their discussions. A new partner and organizer of the discussions is the Baltic Sea Cultural Centre in Gdańsk broadcasting from St. John’s Church. The festival’s partners are Skansen, Council of the Baltic Sea States, Södertörn University, the Polish Institute in Stockholm, the Raoul Wallenberg Academy and the Swedish Institute as well as the Swedish Institute of International Affairs.

The Baltic Sea Festival is part of Swedish Radio’s programming

The Baltic Sea Festival will open the 2020/2021 season at Berwaldhallen. Swedish Radio P2 will broadcast all the concerts live, and produce programmes about the content. Several concerts will also be broadcast via EBU to other European countries. Journalists from Swedish Radio will act as moderators for the discussions around the Baltic Sea.

Berwaldhallen is the Swedish Radio concert venue. Swedish Radio P2 will broadcast all the concerts live from the Baltic Sea Festival. Several concerts will also be broadcast via EBU to other European countries. The Baltic Sea Festival is an international music festival that was founded in 2003, with the aim of using the platform of classical music to invite stakeholders to cross-border discussions about creating a sustainable future for the Baltic Sea region. www.balticseafestival.com

19:00-20:30 CONCERT: “Together we stand strong” (The seven last words of Christ by Haydn), Berwaldhallen, the Stenhammar Quartet, Magnus Lindman, dramaturgy. Seven representatives of the world religions.

18:00-18:45 TALK FROM STOCKHOLM, Berwaldhallen, ”The role of music in the time of climate change”, with composer Karin Rehnqvist and sustainability expert Johan Kuylenstierna.

18:00-18:45 TALK FROM HELSINKI, Hanaholmen, “When art takes a stance”, with Director General of Nationalmuseum, Susanna Pettersson and journalist Erik Blix.

Biographies of the speakers and the other participants can be found at www.balticseafestival.com.